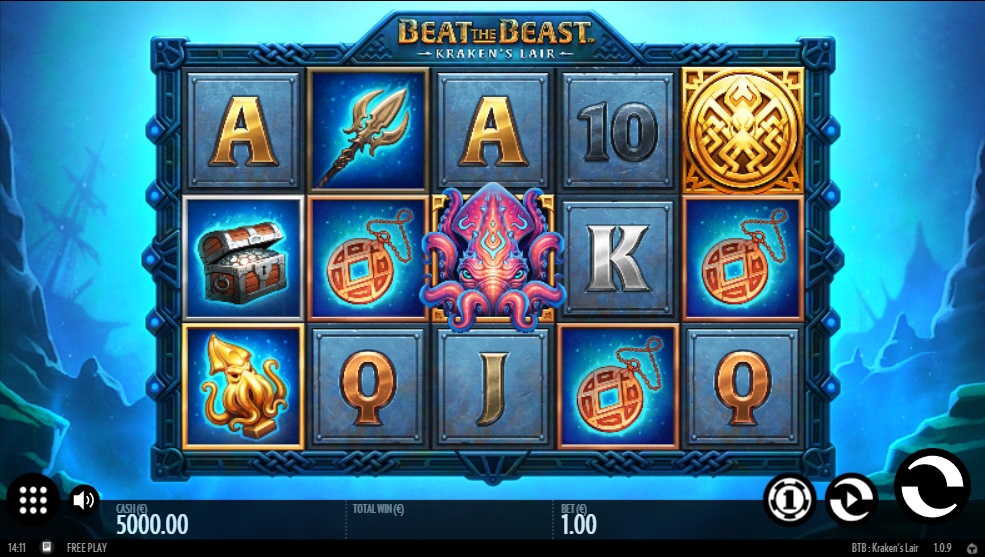 Thunderkick has done a good job of combining the classic video slot look with some more up-to-date graphics and artwork. The setting for the action is the ocean floor where the seabed is dimly lit from the last traces of light penetrating from the sun. bubbles are seen rising from the rocky entrance to Kraken’s Lair. The standard 5x3 board is front and center with low-value symbols sitting on steel squares. The high-value symbols have underwater backgrounds. The soundtrack is epic and ominous, led by a tribal drumbeat.

Low-value symbols are the standard 10-A royal playing card values. High-value symbols are a trident, a pendant, a treasure chest, a Golden Kraken, and a much larger purple Kraken. The purple Kraken is the highest value symbol, with 5 on a payline awarding 500x the stake. A golden carved Kraken Emblem acts as both the scatter and the wild.

In both the base game and the free spins bonus game the Kraken Emblem (which acts as both the wild and the scatter) also acts as a trigger to expanding wins. When it forms part of a winning combo the other symbols in the combo expand to cover the entire reel, thus forming more winning lines. The Kraken Emblem, however, does not expand. 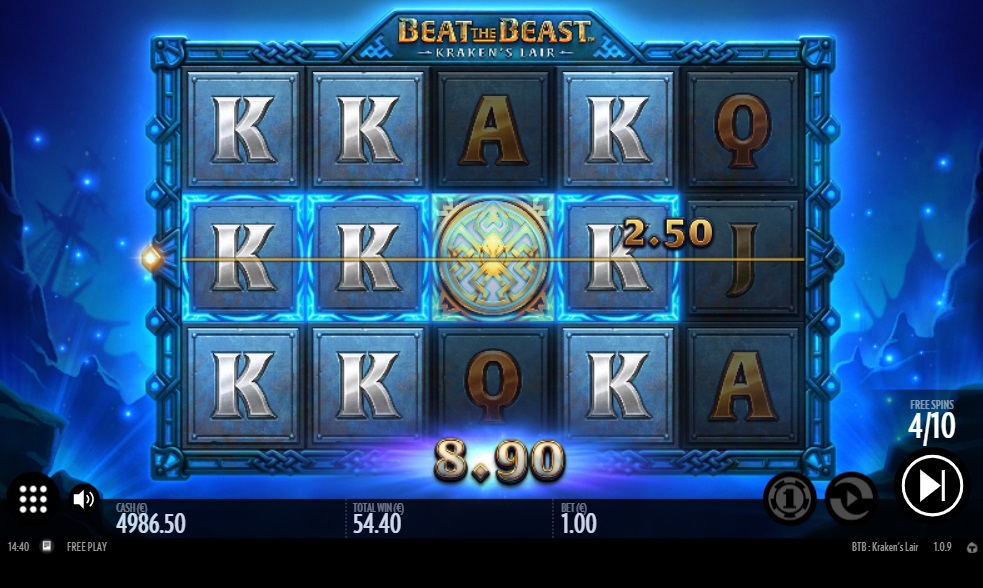 3, 4, or 5 Kraken Emblems trigger 10 free spins, as well as wins of 2x, 20x, or 200x the stake. During the free spins round at least one Kraken Emblem is guaranteed to land on the reels, thus vastly increasing the chances of Expanding Wins during the bonus round. 3 or more scatters retriggers a full 10 free spins and are able to do so indefinitely.

Our Thoughts on Beat the Beast: Kraken’s Lair

This is a simple slot with decent potential, and it provides a couple of nice twists to disguise a very familiar mechanic. Any fans of the many ‘Book or Ra’ slots or clones will immediately recognize the similarities here; the expanding symbols, the 9 paylines, the 500x win line, the 200x win for 5 scatters, and so on and so forth. However, the way it plays is different enough for Kraken’s Lair to be considered an original slot. This is a good effort for the first in the series of ‘Beat the Beasts’. It is volatile enough to attract high variance fans and will also attract those who enjoy simple but effective classic slots. It won’t be for everyone, but it does what it says on the tin.