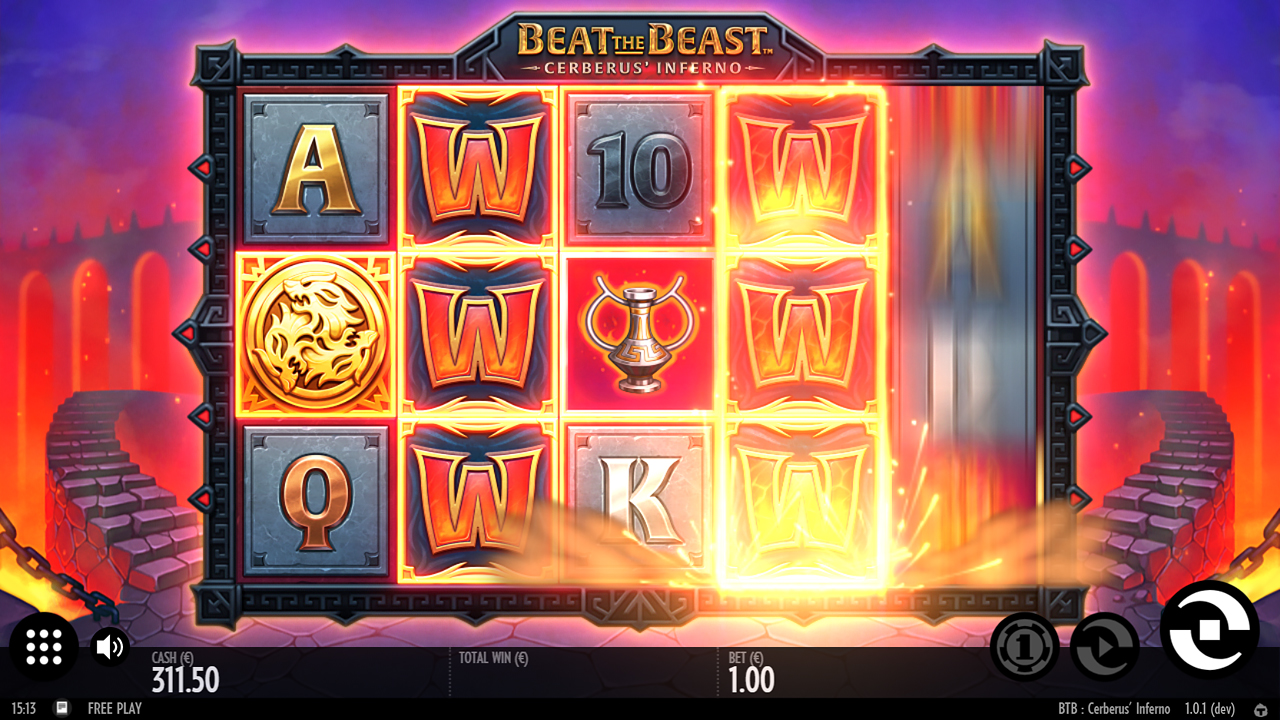 Unlike most stacked wilds which can appear either fully covering the reel or part of the reel depending on where it lands, stacked wilds in Cerberus Inferno always land covering the entire reel. This enables far more winning combinations, especially in the bonus round.

3, 4, or 5 scatters trigger 10 free spins. During the free spins round the 9 fixed paylines are abandoned in favour of a 243 ways-to-win mechanic. This means that matching symbols (2 or more for high value, 3 or more for low value) only have to be on adjacent reels, starting at the leftmost reel to qualify as winning combinations. With so many more ways to pay the stacked wilds take on a much more effective role during free spins. 3 or more Cerberus Emblems during free spins gives a full 10 free spin retrigger, and retriggers are unlimited.

As with the other two Beat the Beast games Cerberus Inferno plays off a 5x3 gameboard with 9 base game paylines. As per the mission statement from Thunderkick with regards the series, it is also a highly volatile affair. With a max win a devilish 6,666x the stake, Cerberus Inferno sits beneath Mighty Sphinx’s 7,777x but comfortably above Kraken’s Lair’s 4,444x. The RTP is a smidgen higher at 96.15% as compared to Sphinx’s 96.14% and Lair’s 96.12%.

If you’re familiar with the previously mentioned slots, then it’s clear you’re looking at a Beat the Beast game the moment you set eyes on it. Side by side, all three gameboards are extremely similar in design, from the frame to the reels, and even to the symbols. Also, once again the background is a single, static landscape, this time at the gates of hell. A pair of high, stone, staircase/bridges on either side of the gameboard lead out over the fires of hell below. In the distance, an even higher stone bridge crosses the screen, bathed in an orange glow from the volcanic hellscape which surrounds it. During free spins, the fires burn even brighter, setting fire to the gameboard and illuminating the darkened sky orange.

Low-value symbols are the standard playing card royals 10-A. High-value symbols are sceptres, warriors helmets, urns, a golden statue of Cerberus, and three burning blue heads of Cerberus. The blue-headed Cerberus is the highest value regular symbol worth 150x the bet size. The Wild also pays 150x the bet size for 5 on a payline. The Cerberus Emblem is both the scatter and a single wild (as opposed to stacked like the other wild). This is the highest paying symbol of all with 5 scatters awarding 200x the bet size.

Our Thoughts on Beat the Beast: Cerberus Inferno 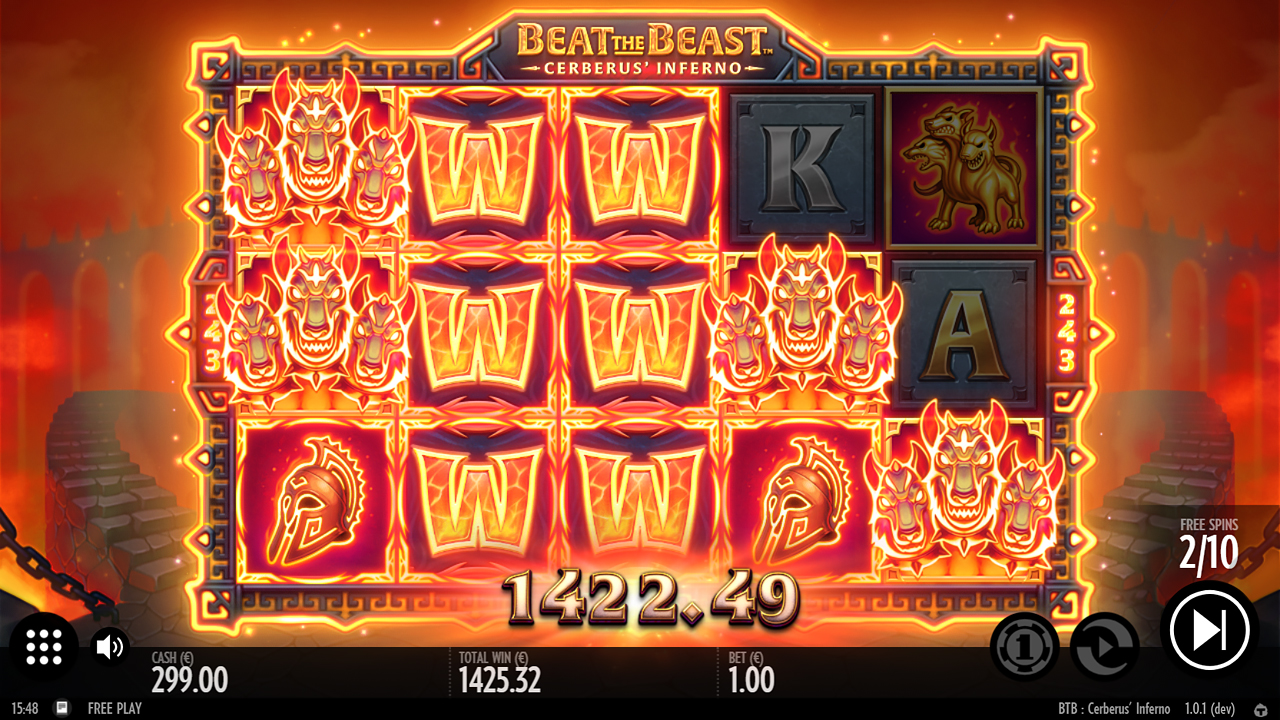 Once again, a Beat the Beast does exactly what it says on the tin. It’s a classic 5x3 volatile slot with great potential and some high paying symbols. However, I would say that feature-wise, it is a little thin on the ground, even more so than its predecessors. Obviously, the 243 ways-to-win offers a little more excitement in the bonus round, but this is hardly a new mechanic.

Hopefully, for parts 4 and 5 of the series Thunderkick can add a little more spice to proceedings and liven things up a bit. Don’t get me wrong, this is a decent game, but the franchise is in danger of becoming a little stale.