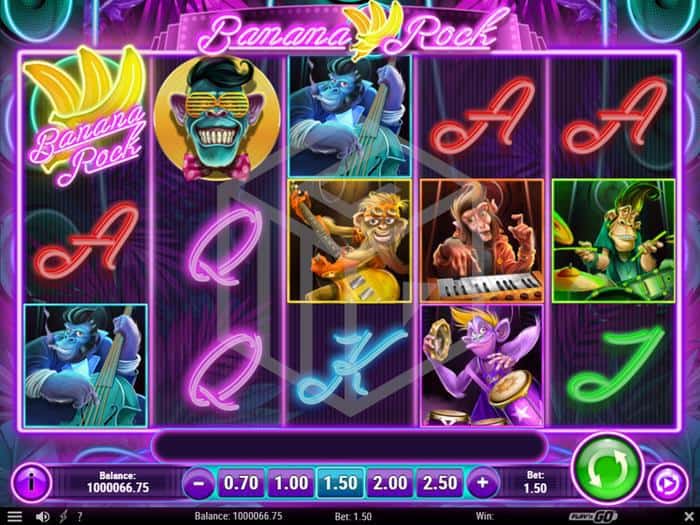 As you can probably imagine from a slot with rock star monkeys as their central characters, the design of Banana Rock is fun and funky. Two pairs of huge green speakers sit either side of the neon-framed game board to resemble a late 80’s rock venue called – you guessed it – Banana Rock. Large tropical plants can be seen sprouting from the ground either side of the board just to remind you that this Rock venue is in the middle of the jungle. The soundtrack is of a repeated rock riff interspersed with bursts of guitar (to signify a win) and the occasional baritone ‘Oh yeah’ when the lead singer wild-symbols lands.

The lower value symbols are taken by the standard J, Q, K, and A (all in fluorescent neon of course)  while the 5 higher value symbols are all monkey members of the Banana Rock group; the purple bongo player, the blue bassist, the orange keyboard player, the green drummer, and the yellow guitarist who is the highest paying symbol with 5 in a row worth 60x the bet size. All band member symbols can also appear as full reel symbols as well as single square symbols. The wild is a headshot of the lead singer of the band with his Elvis quiff, pink spotty bow-tie and a pair of yellow shutter sunglasses, all on a yellow circular background. The scatter symbol, which only appears on reels 1 and 5 is the banana rock logo.

Banana Rock has both special feature called Rock ‘n’ Rollin’ Respin which occurs in both the base game and the bonus round, and a free spin bonus round with multipliers and an additional guaranteed win spin known as an ‘Encore Spin’ 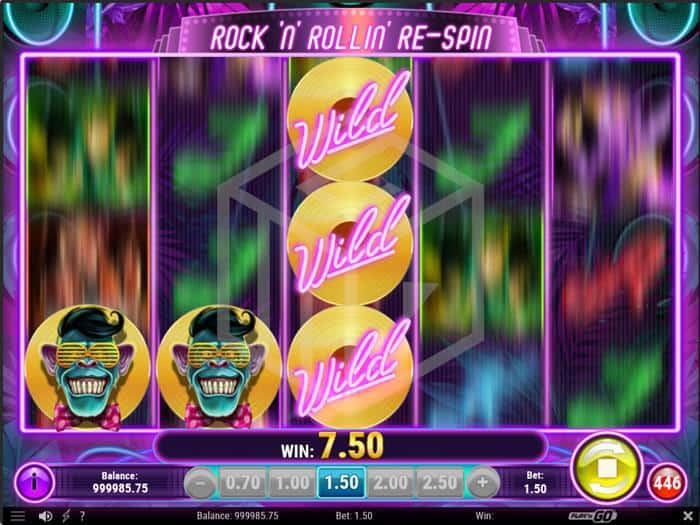 If you land two or more lead singer wilds in one spin then the wild nearest the right-hand side of the board will move vertically then horizontally across the board until it meets the wild closest to the left – along the way each square the wild passes is transformed into another wild. When the two wilds meet a respin is awarded the additional wilds staying in place for the duration of that spin.

Land the scatter symbol on reels 1 and 5 and you’ll be awarded 10 free spins. Each time you land a scatter symbol during the free spin round you will be awarded one additional free spin. If you trigger a Rock ‘n’ Rollin’ Respin during this round the respin will not affect the number of free spins you have left. If you land a full reel band member symbol during free spins (each band member other than the singer has one reel where they can land stacked) then that band member will now have an additional multiplier added for any wins involving them. Land the same full reel symbol and another multiplier will be added to that band members winning combos up to a 5x multiplier per band member. 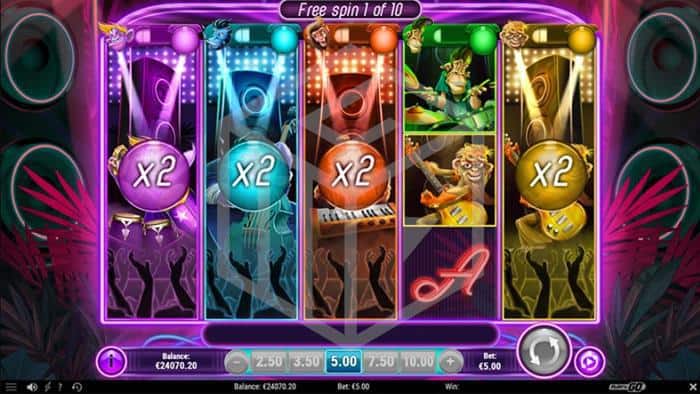 Play‘n Go has succeeded in adding an interesting new twist on the rock ’n’ roll slot theme with a fun design, some innovative features and groovy gameplay.

Of course, as a high variance affair, you can take it as a given that you will suffer some lean spells but there’s plenty to keep you entertained. The Rock ‘n’ Rollin’ Respin, for example, rears its head reasonably often for some decent multi-wild wins, and the free spin round offers some nice touches with plenty of scopes to grab additional spins, lots of multipliers to collect, and the anticipation of a potentially huge Encore spin to cap it all off.

As with 99% of slots, Banana Rock isn’t re-inventing the wheel here, but there’s enough of that famous Play'n Go panache to make sure that this title isn’t just another portfolio filler but rather a genuinely interesting and fun take on a well-trodden path.