The name of the slot game - Aurora - comes from a term used to describe a natural electrical phenomenon characterized by the appearance of streamers of reddish or greenish light in the sky which we also know as the Northern Lights.

With that said, let’s take a closer look at the design and symbols of this new Relax Gaming Slot. 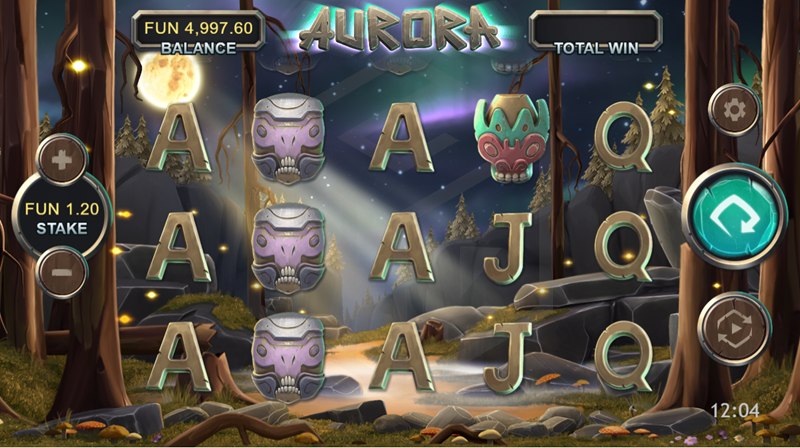 If you haven’t already guessed by now, this new Relax Gaming slot game follows a mystical theme, set at the edge of a forest with Northern lights gleaming in the background.

As you make your way through the moonlit forest, look out for the scary-looking mountain trolls who appear to be frozen in time. However, do not be fooled - they do come to life.

This beautifully innovative designed slots highest paying symbols are denoted by four different tribal masks, a stone with ‘Aurora’ written across the centre and a Wild.

The lower paying symbols are made up of a J, Q, K and A.

As the northern lights shine down on us in this slot game, we took a deeper look into the forest to discover what special features Relax Gaming added to Aurora. 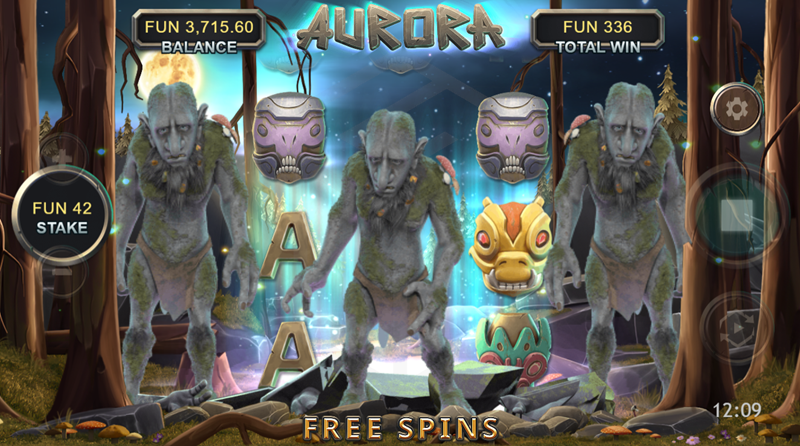 Troll symbols can only land on the very middle reel and count as a Wild symbol. If three Wilds land on top of each other they will become a Stacked Wild.

As a Wild Symbol, the Troll can substitute for all other regular symbols in the slot game.

By landing a full stacked troll will trigger the free spins round. If you are unfortunate and only land part of the stacked wild, then the symbol has the ability to nudge slightly up or down which could potentially transform it into a fully Stacked Wild.

To activate the free spins round you are required to land a full troll on the middle reel during the base game or three stacked wilds during the random bonus feature.

Once the free spins round is triggered the troll will awaken and stand on the centre reel. The troll can then move to either his left or right or even evolve into two trolls.

During each spin, an additional troll can make an appearance. The troll will remain on the reels until he finally has edged his way far enough to his left or right that he vanishes from the reels and into the forest.

Once there are no more trolls present on the reels the round will come to an end.

At any time during your gameplay, the Aurora wind could whisp across the reels from left to right after a losing spin. As a result of the gust of wind, the reels will begin to rotate by themselves.

Every symbol has a second face which is a Wild. Once the Random Bonus comes to an end, the symbols have the ability to land with a Wild face showing.

With this feature, you have the ability to fill the whole reel with Wild Symbols and increase your chances of landing a mega win!

For a low variance slot game, I have to admit I love it. This could be down to the stunning graphics and design but, Aurora is incredibly aesthetically pleasing to look at.

If you are a high roller then this slot is most likely not going to be your cup of tea, however, it is a nice way to start your gameplay off.

The theme o0.30f the game is one that could appeal to the vast majority of players and even if you disliked the theme, you surely have to be impressed by the innovative thought that went into creating this slot game.

Overall I give Relax Gaming top marks for this slot. Other than the fact the new online slot is of a low variance you can still have fun playing and chasing those special features and trolls.