Released on 5th December 2019, Ankh of Anubis joins Play‘n Go’ collection of slots with an Egyptian theme. However, I can put your minds at rest straight away by letting you know that this is NOT another Book or Ra clone. In fact, this is a wholly original slot from PnG.

According to the developer, “The mighty Anubis, the god of the dead, is the focus of the game. Having ruled over ancient Egypt for 3,000 years, Anubis has ushered in an age of technological prosperity and great wealth throughout the land, while simultaneously using his immense power to protect his kingdom from those who would challenge him. Armed with his sacred Ankh, only he can wield its mighty power and grant players with a chance to share in his enormous fortune.” Sounds good so far – let’s take a look at the numbers.

Forgoing the standard set up, this slot plays a 3-4-4-4-3 reel set with a pays-all-ways mechanic providing 576 ways to win. PnG give this slot an 8 out of 10 on the volatility scale meaning that while it isn’t quite as crazy as recent releases Black Mamba or Big Win 777 which both received 10/10 volatility ratings, but still packs a punch. This slot also packs potential, with a max win of 15,000x, Play‘n GO’s biggest max win to date.

Ankh of Anubis is not overburdened with features, but it does offer random wilds as well as a free spins round with additional wilds and the potential for unlimited retriggers. 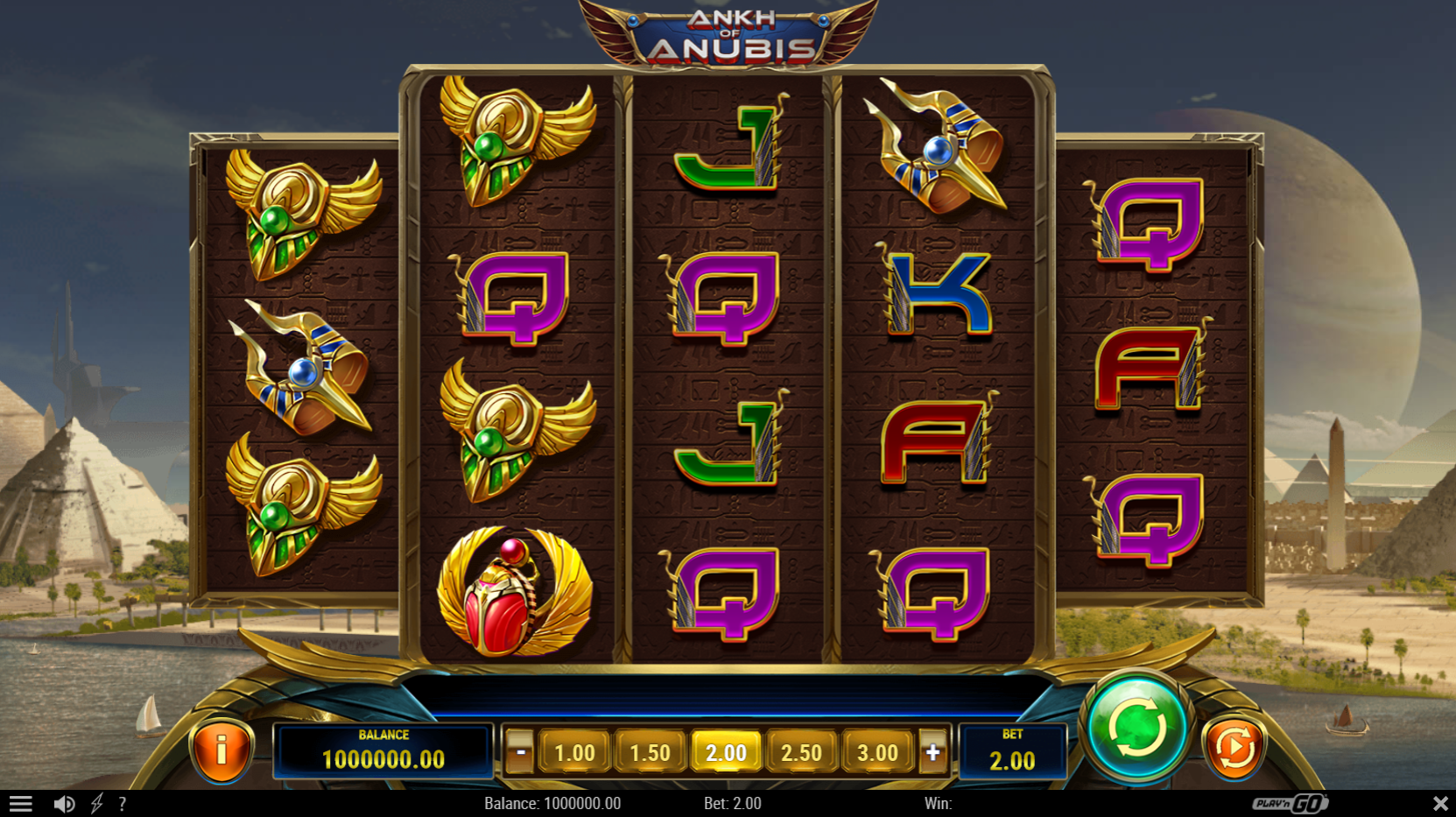 There are some interesting elements to the design here. You’ll notice in the intro I said this slot had an Egyptian theme rather than an Ancient Egyptian theme, and that’s because there are both ancient and futuristic elements to the design. The gameboard itself is all Ancient Egypt with hieroglyphics covering the reels as well as the famous Ancient Egyptian symbols.  There are also pyramids in the background and Ancient Egyptian boats sailing across the harbour. However, there are also very futuristic looking buildings among the pyramids as well what look like fighter jets flying overhead. Even more strange is the enormous plant visible to the right of the gameboard. There is certainly no planet of that magnitude that close to earth so is this Egypt at all?

Low value symbols are the standard royals J-A. High value symbols are bracelets, sacred amulets, scarab beetles and ankh crosses. The ankh cross is the most valuable regular symbol, paying 5x the bet size for 5 adjacent symbols. The scatter is a golden pyramid and Anubis is the wild as well as being the most valuable symbol of all, with 5 adjacent Anubis paying 10x the bet size. 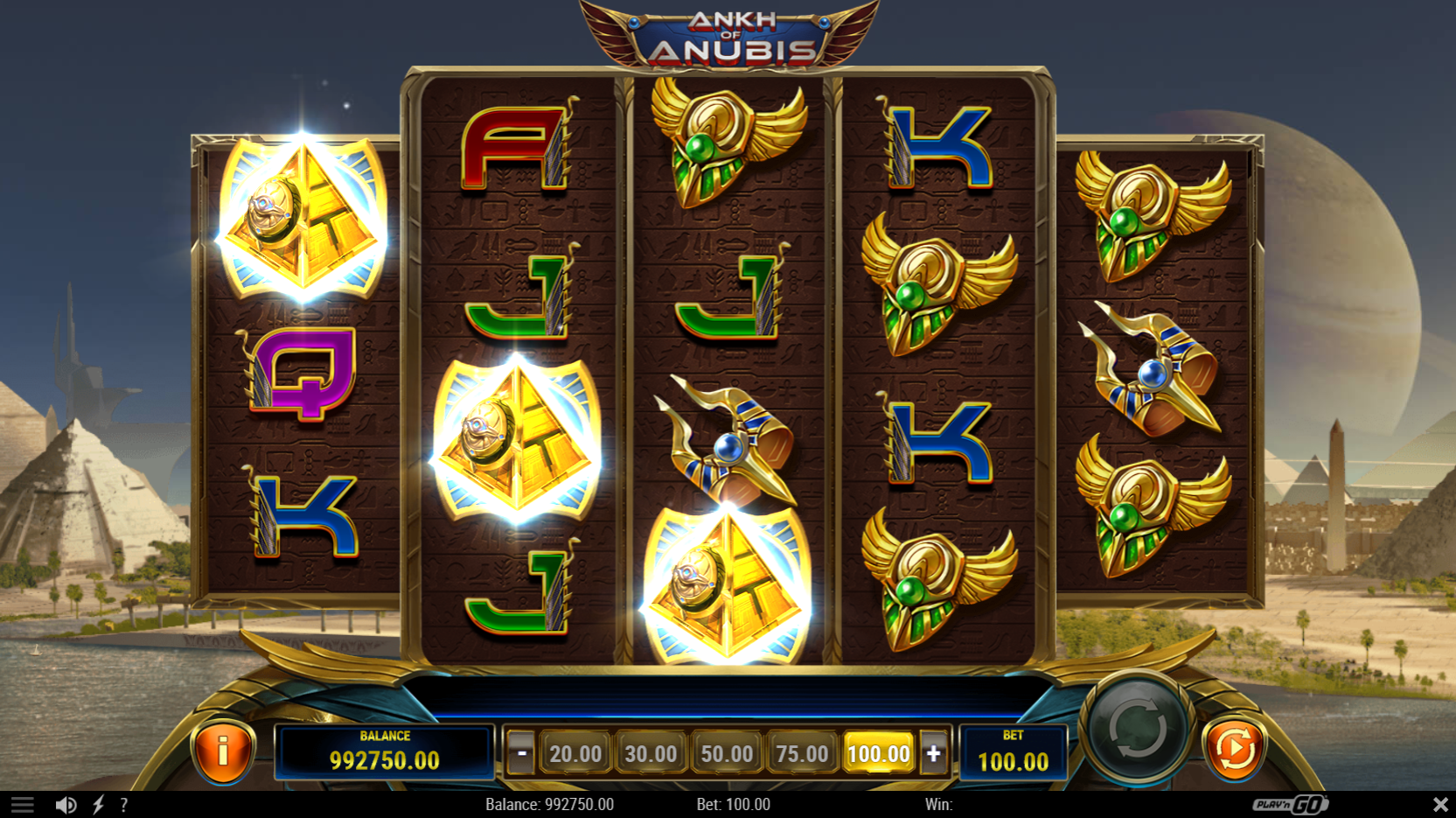 Our Thoughts on Ankh of Anubis

I thoroughly enjoyed my time playing Ankh of Anubis. It may not be bursting with features, but the features are solid and can pay well. The Anubis Wilds often deliver multiple and stacked wilds, and I was surprised at how many decent wins I picked up during the base game. The free spins round is also great fun; Anubis Wilds are usually triggered several times during the course of an average free spins round, and retriggers are relatively abundant here when compared to other slots high variance slots. Furthermore, with a maximum win of 15,000, this is a slot with plenty of potentials.

I’m impressed with Play‘n GO’s effort here; the volatility is high enough for the action junkies, but not so high as the scare of some of the more casual players. The features are bountiful, and the potential is fantastic. And it’s not a Book of Ra clone!