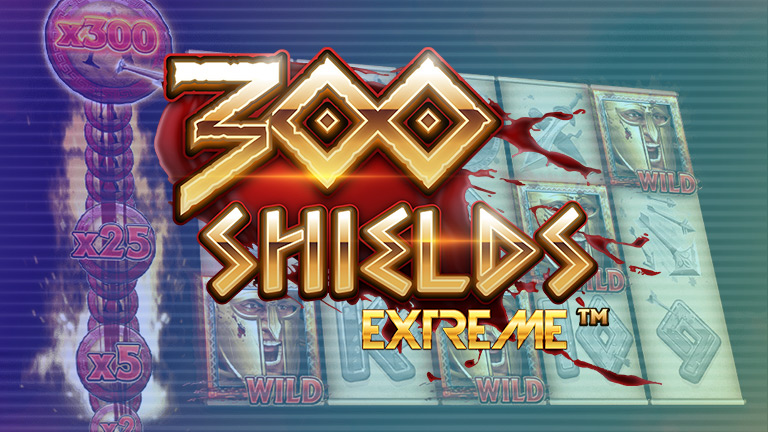 The 300 Shields Extreme slot isn't new, sorta' speak. With this release, NextGen takes advantage of a current trend to breathe new life into one of their most enduring slots, 300 Shields.

300 Shields Extreme, based on the epic Spartan movie “300” is highly volatile with just one potentially massive feature. Sound like the original? Well, it is, only this time NextGen has added a “buy-a-feature” button for all those who can’t be bothered to wait around to line up the scatters.

The design is almost identical to the original albeit a bit sharper and smoother, but for anyone unfamiliar, we’ll recap.  The setting is a Persian wheat field with meadows beyond and a Temple high on a hill in the distance.

The game board sits front and centre atop the gently swaying wheat and has a stone border with the parchment background. The background changes during the bonus round to a rocky outcrop at the sea’s edge, and later to a full-on marauding battle scene.

As previously mentioned 300 Shields Extreme what they call a “BUY PASS” as well as the game’s Holy Grail, the battle feature.

The battle feature is triggered by landing 3 or more scatters, or by paying for the “BUY PASS”. When triggered 5 free games are awarded all Warrior wild wins paid with a 2x multiplier. This feature can be retriggered by landing a further 3 scatters awarding another 5 spins. Even without a retrigger landing scatter shields in the bonus round reward both extra spins and extra win multipliers.  A meter to the left of the game board charts your progress as you collect shields throughout the feature; the milestones are as follows

Every series of 5 free games must be fully played out at the current multiplier level before moving on to the next series.

As it been the best part of 5 years since the original game was released, it was good to see some improvements to the design, as well as the addition of the “BUY PASS” option. The HD graphics are much sharper and the animations (such as the blood pouring down the reels during free games) are way more realistic.

The buy-a-feature option will no doubt appeal to the gamblers among the community, and given the already highly volatile nature of the game, I’ll assume that will be quite a few of them. However, I would urge anyone thinking of paying 60x the bet size to enter this feature to understand just how volatile it is.

Although this feature is among the best on offer in terms of potential with a single spin win of 17,700x possible, it is also very capable of delivering very little indeed. Entry into the battle feature is no guarantee of a big win as for every massive win there will be plenty of disappointing ones.

This isn’t to say the 60x price tag is unreasonable, just that you need to have the bankroll to endure the pain before seeing the gains. Given the potential, 60x is a reasonable price to pay if you’re in it for the long haul. Tread carefully, action junkies!