Side Bet City is a live casino poker game made by Evolution Gaming where players can win up to 1000x their bet. 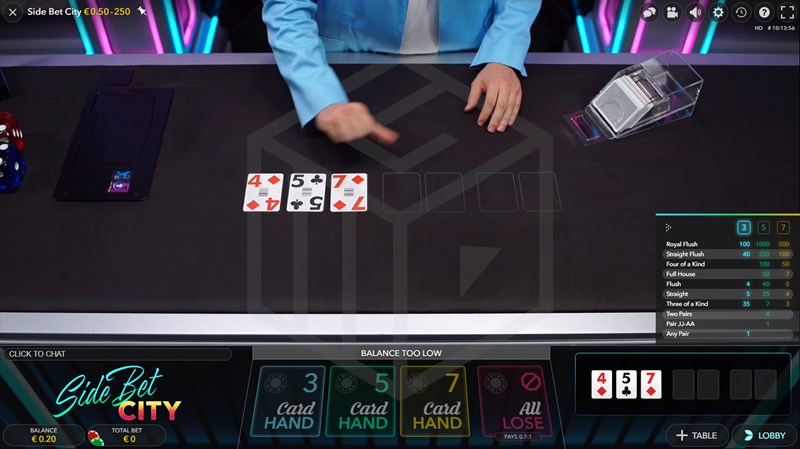 In Side Bet City, the hand rankings ranging from a pair to a royal straight flush are the same as those of Texas Hold 'em. The key difference between this and regular poker games is that the type of hands you make depends on what bet you place and the multipliers for each of them.

How to Win playing Side Bet City?

When you play a hand in Side Bet City, you're playing against the game's paytable; not the dealer.

Players can place bets on four different spots in Side Bet City.

Once bets are placed, there is no further player action.

However, for pairs to pay in this game, only JJ QQ KK and AA count as pairs, except in the 3-Card Hand. The lower pairs are disregarded in the 5-Card Hand, and Pairs of JJ and above are ignored in the 7-Card Hand. In a nutshell:

Note: A four-of-a-kind, full house, or two pairs do not pay when playing a three-card hand in Side Bet City as these require 4 or 5 kinds to make the Hand.

Note: There are no payouts for a paired hand lower than J-J in Side Bet City.

Note: There aren't any payouts for any pairs or two pairs in 7-Card hands.

The RTP of Side Bet City

The best hands to place your bets on in Side Bet City are the "3-Card Hand," and the "All Lose," These have the highest RTPs, while the worst ones to make are the remainders.

Should I bet on all options in Side Bet City?

No, you should not. Betting on all options in Side Bet City results in an average RTP of 95.70%, making it the third worst choice you can opt for when playing while also crippling your bankroll at a much faster rate instead of placing bets on single outcomes.

Is the "All Lose" the same as insurance in Blackjack?

Insurance in Blackjack is a side bet that pays 2:1 if the dealer's up-card is an ace, and the Hand ends up being a "Black Jack.". "All Lose" in Side Bet City is not insurance but the second best bet to place in the game when considering the overall RTP is 96.29%.

Should I bet on the 5-Card Hand due to the high multipliers?

Although the highest multipliers are found in the 5-Card Hand paytable, it's also the third worst option to bet on as it's much harder to make a 5-card hand. Then again, it's the more popular bet between players due to the multipliers.

Is there a strategy to beating Side Bet City?

You're not playing against other players but the house, specifically the paytable. As such, there is no strategy as the house always has a mathematical edge over the players, in the long run, ensuring that the casino makes a profit.