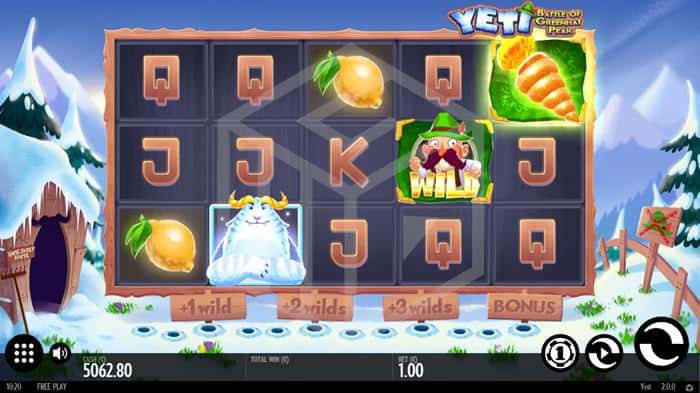 Well as we’ve already talked about frozen carrots and moustachioed Bavarian villagers you can probably guess this isn’t going to be the most serious of slot designs. It’s a fun game with some fun cartoonish graphics and characters set in the Bavarian Alps. The back drop has snow peaked mountains in the distance making way to snow-covered evergreens, while a wooden cabin sits next to the game board with a sign reading “Home Sweet Home” – The shape of the doorway suggests it is the home of the Yeti, a big white beast with fang-like teeth, a mischievous grin and a pair of golden horns. The game board itself sits within a carved wooden frame and the symbols rest on wooden squares.

The low-value symbols are wooden royals J, Q, K, and A, the medium value symbols are cherries, lemons, and melons, while the highest value symbols (both worth 35x bet size for 5 on a pay line) are the Yeti and the Wild symbol. The wild symbol comes in the form of one of the aforementioned moustachioed Bavarian villagers with his ruddy cheeks and a green felt hat with a feather sticking out of the brim. The scatter symbol is the frozen carrot.

Yeti Battle of Greenhat Park offers up a Wild Attack feature and also a free spin round, both of which can benefit from Sticky Wilds. Also, both special features are triggered by the frozen carrot scatters. 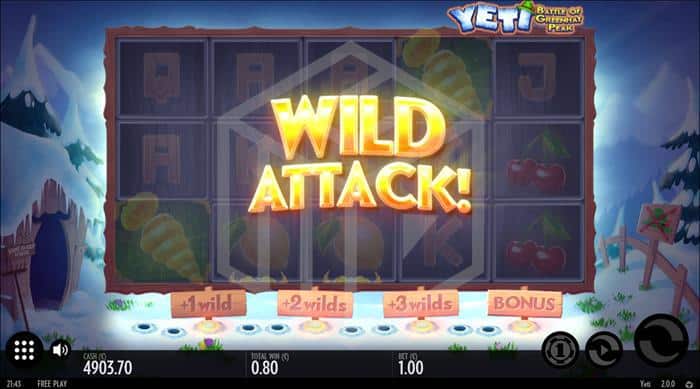 If you land 2 scatter symbols you will most likely trigger the Wild Attack feature, although it is possible that on occasion 2 symbols might take you straight to the free spin round. During the Wild Attack, you’ll be given between 1 and 3 Sticky Wilds and a respin. When a wild becomes sticky the poor Bavarian chap turns to ice and looks rather startled.

As mentioned it is possible to get to the free spin round with just 2 scatters if the slot is feeling generous. However, you’re guaranteed 10 free spins if you land 3 scatter symbols. If you manage 4 or 5 frozen carrot scatters then you’ll receive 15 or 20 free spins. In the free spin round any scatter symbols which land will be added to the Wild Attack meter at the bottom of the game board and for every 3 which land you’ll receive 2 extra free spins as well as an additional Sticky Wild for each remaining spin. If any of your Sticky Wilds go on to form part of a win then they will disappear, although you’ll still receive additional Sticky Wilds with each new spin which will remain in place until they too are included in a winning pay line (the number of additional Sticky Wilds your get per spin depends on how far along the Wild Attack meter you are). As well as getting an additional 2 free spins for every 3 scatters which land during the free spin round, if you fill the meter you’ll receive 5 free spins. The most number of free spins which can be won, however, is limited to 31. 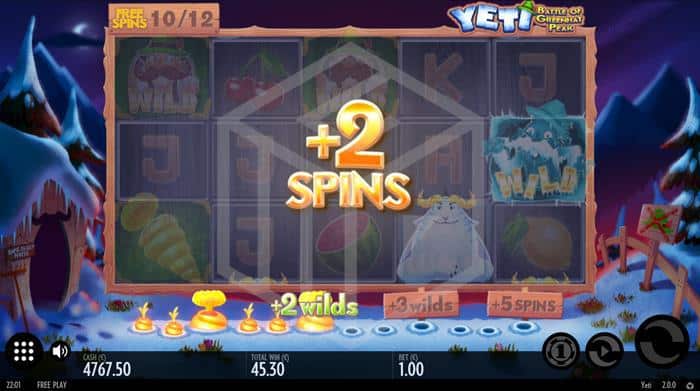 Our Thoughts on Yeti Battle of Greenhat Park

Yeti Battle of Greenhat Park is a well-designed game with a very entertaining free spin round with Sticky Wilds (I do love a sticky wild it has to be said) and can provide you with hours of entertainment for very little money. However, it is for that precise reason that high rolling slot aficionados will absolutely hate it, because if there’s one thing likely to scare off a serious slot gambler it isn’t going to be a Yeti, it’s going to be the words “low volatility”, and that’s exactly what you’re playing with here. This isn’t meant as any sort of sleight on Thunderkick’s work here as I’m quite sure they knew exactly who they wanted to cater to and that’s fun-seekers and bonus grinders. I could happily see myself spending a couple of hours on Yeti Battle of Greenhat Park if a had a couple of hundred dollar deposit bonus to play through, although I do think someone should tell Thunderkick that the mythical Yeti is supposed to dwell in the Nepalese Himalayas rather than in a landlocked federal state of Germany!