Play Wings of Riches on

NetEnt never releases a bad looking slot and the visuals here are nothing if not easy on the eye. Set among the foliage of an enchanted forest, pretty fairies’ flit among the pretty flowers, whilst colourful insects search for sustenance among the leaves and blooms. The gameplay is accompanied by a suitably nimble soundtrack, with dainty piano tinkles representing the little beasties and fairies darting about the forest floor whilst the cheerful chirrup of birds echoes in the background.

The animated dandelion wild is known as a ‘Spreading Wild’ as upon landing the dandelions’ seeds float gently away from the original symbol and come to rest on a random, adjacent, symbol before turning it wild. A dandelion wild can turn between 2 and 4 other symbols wild. Wilds initially only land on reels 2, 3, or 4 but can spread to reels 1 and 5. 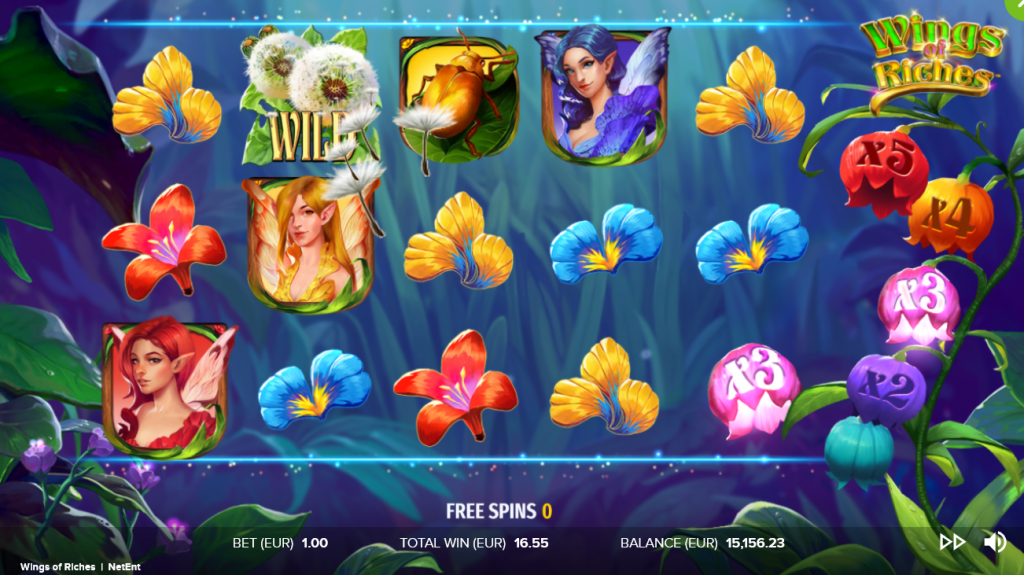 Our Thoughts on Wings of Riches

Wings of Riches is a very simple slot from NetEnt and on the whole a fairly average one. That’s not to say it isn’t playable, as it delivers wins on a regular basis and the free spins round can be very lucrative if you manage to land enough win multipliers and free spin retriggers. That said, managing to consistently land multipliers and retriggers isn’t as simple as I may have just made it sound. In order to get anywhere close to those big wins. Theoretically, Wings of Riches can deliver 1,500x the stake during the base game, rising to 7,500x the bet during the bonus round, so the potential is there. The question is, with only a limited amount of fun to be had with just one bonus round and a spreading wild, can you be tempted enough to hang around the forest long enough to realise that potential?