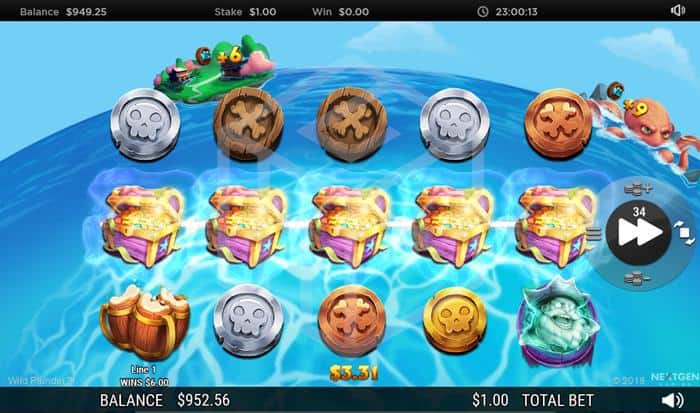 The design of Wild Plunder is pleasant enough to look at, and the rotating globe animation which is in constant movement behind the game board is a neat touch. As the watery globe rotates an assortment of different sized islands will pass you by in the distance which wouldn’t look out of place in a Mario World game on the Nintendo Wii. In fact, the symbols and general aesthetics, on the whole, are, well, a little on the childish side - and the Captain Pugwash type sea-shanty background music does nothing to detract from the general pre-teen vibe the slot’s design sends out.

The low-value symbols are four different but equally valuable treasure coins. These are followed by jugs of ale, a treasure chest, a ghost pirate, and Kraken the Octopus. The star of the show is the Jolly Rhonda Wild which is also the most valuable symbol with 5 of a kind worth 16x bet size. The other symbol is the logo wild which appears during the Wild Currents feature (see special features below).

As previously mentioned the Wild symbol has a major part to play in Wild Plunder and is the main component of all the special features; the randomly triggered ‘Release the Kraken’, and ‘Wild Currents’, and also in the Wild Plunder Free Spins and Rhonda’s Respin.

Every so often if one Jolly Rhonda Wild lands on the reels you might randomly be awarded ‘Rhonda’s Respin’ whereby the Wild will stay in place while the reels spin again. This gives you an extra chance to enter the free spin round which is triggered when 2 Jolly Rhonda Wilds land. 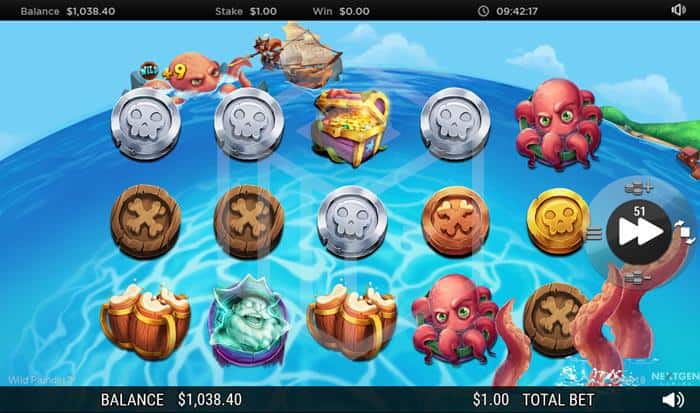 Wild Currents is another randomly triggered feature which rewards you with wilds, although this time with logo wilds rather the Jolly Rhonda Wilds (only the JR Wilds trigger the free spins round). The islands in the distance all have a number between 3-9 and a wild sign above them as they rotate with the globe. When the Wild Currents feature randomly triggers, the globe will start spinning wildly and one of those islands will drop their wilds onto the reels. 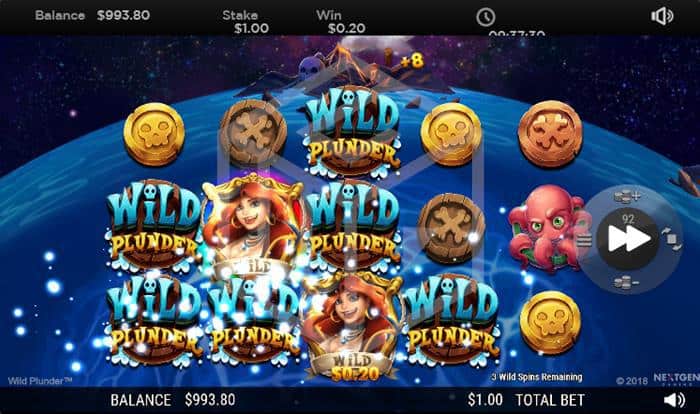 Land 2 Jolly Rhonda Wilds in the same spin and you will trigger up to 5 Wild Spins. All premium symbols near the wilds will also become wild which can trigger some big wins. From this point the wilds become ‘walking wilds’ which will all move one reel to the left with each new spin which in turn can create new wilds, news wins, and potentially new spins.

Our Thoughts on Wild Plunder

It took a while for Wild Plunder to grow on me, but eventually, I have to concede that I got a decent amount of enjoyment out of playing it. For a slot which claims to have med/high volatility, it seemed fairly pedestrian at first with a lot of very small wins keeping my bankroll ticking over (if slowly diminishing) but nothing much exciting to write home about. I also found the child-like animation a little grating after a while. However, once the features started rolling in I found myself enjoying it more and more. I also managed to bag some very decent wins, quite a few between 100x and 300x the stake. With some nice features and a better than average RTP, I’m going to give a tentative thumbs-up to Wild Plunder, it could be a grower…