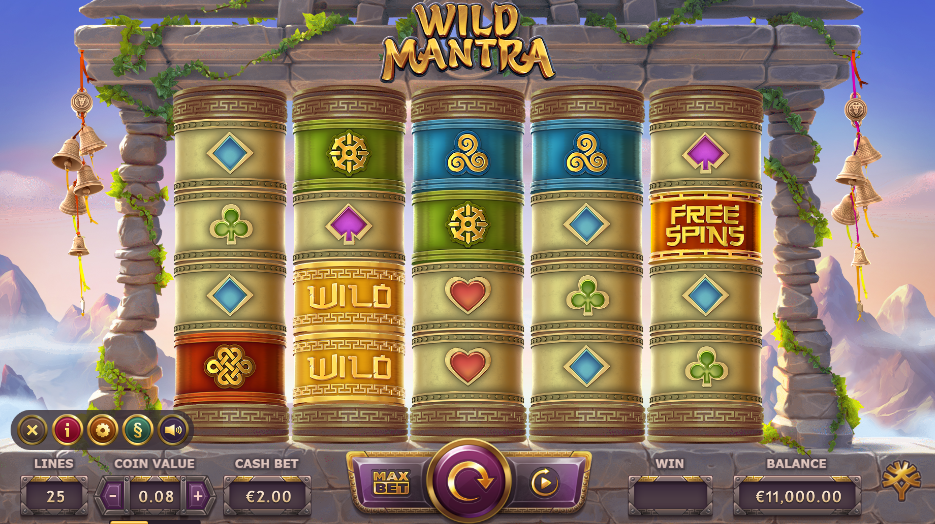 One thing you can rely on from Yggdrasil is quality artwork, and once again they have delivered with Wild Mantra. The five reels are designed as spinning, cylindrical totems with each displaying four symbols. They spin horizontally although the paylines still run from left to right.

The reels are framed by what’s left of an ancient stone temple with Buddhist bells hanging from either side swaying gently in the breeze (look carefully and you’ll also see the Leo Vegas logo in among them). Behind the game board, a trail of animated clouds passes behind the glorious mountain tops of the Himalayas set against a cobalt blue sky. The soundtrack is suitably calming, hypnotic, and with heavy eastern influences.

Wilds are golden and are the only symbols to appear stacked on the reels. The scatter is a FREE SPINS symbol and is also the highest paying symbol of all with 5 anywhere on the reels paying out a huge 1,000x the bet size.

Wild Mantra benefits from a base game feature known as the ‘Mantra Re-spin’. The game also comes with a scatter triggered free spins bonus round with sticky wilds.

Any wild landing during the base game will trigger a re-spin. If another wild land during the re-spin then not only will another re-spin be awarded, but also another wild will be added next to all previously landed wilds. 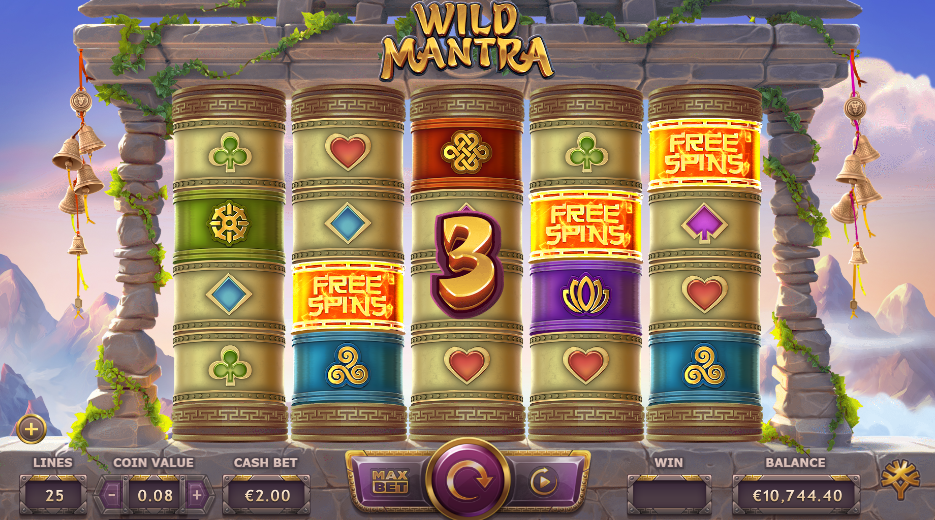 Landing 3 or more free spin symbols activates the bonus round and 10 free spins. Any wilds on the reels when the round is activated are carried over and remain in place throughout the round. Furthermore, any wilds that land during the bonus round will also remain sticky.

Triggering the free spin round also guarantees at least one wild somewhere on the top row. If a full reel is filled with wilds during the bonus round 1 additional free spin is awarded.

Our Thoughts on Wild Mantra

Wild Mantra is visually appealing and the hypnotic spinning of the cylindrical reels combined with the soothing soundtrack makes for a seductive experience – for a while. Unfortunately, there wasn’t really enough to this game which compelled me to play it for too long.

The base game feature doesn’t really pack much of a punch, and the wins are pretty damn low. There is some potential with the free spins round with the stacked and sticky wilds, although even filling the entire game board with wilds only pays 100x the bet size.

If you like to watch your reels spin on a pretty looking game with some ethereal music then, by all means, give Wild Mantra a go. Other than that, however, there’s not much else to recommend here I’m afraid.

Tip: Take our Casino Index for a tour if you’re looking for secure and top-rated places to play at. Click here and check out the filtering options that allow you to sort all the casinos we’ve listed by game providers, payment methods, and much more.