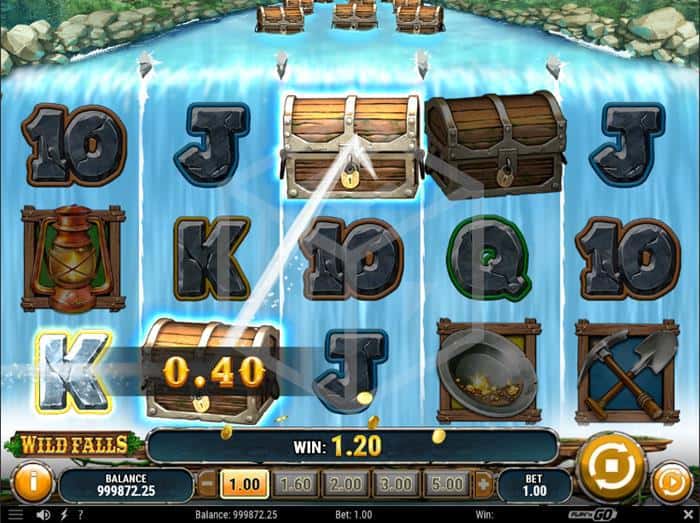 The graphics for Wild Falls are fairly basic with a cartoon look about them. The setting is the edge of a waterfall along the Yukon River. The symbols appear in rows on the face of the waterfall separated by lines of white water created by the flowing river above hitting stones at the edge of the waterfall before the water cascades down. The frameless and floating “game board” if you will covers the entire screen but for the top 10% or so which shows the river flowing towards the fall with treasure chests bobbing in the water, ready to inevitably tumble down over the game board at some point. IN the background banjos strums a jolly ditty in keeping with the gold rush era.

The low-value symbols are taken by the royals 10, J, Q, K, and A which appear carved out of rock followed by lanterns, a silver prospecting dish, and a bag full of gold. The bag of gold is the highest paying symbol rewarding 25x the bet size for five along a pay line. The treasure chests, which actually cascade down the waterfall onto the reels from the river above rather than spinning in like the other symbols act as both the scatter and the wild, and only appear on reels 2, 3, and 4.

If one (or two) chests land successfully on the reels then you will be awarded a respin with the chest (which is wild and the scatter as previously noted) locked into place. Regardless of whether the next spin is a winning one or not if another chest lands then both will remain sticky as a further respin will be awarded whereas if no additional chests land then the initial chest will fall off of the reels. If a third chest lands then not only will you be paid out for any wins which may have occurred but you will also have triggered the River of Gold Free Spins feature.

As explained above these free spins are awarded if you land three chest scatters anywhere on reels 2-4. Unlike during Rapid Respins, during this round the chests will not fall off the reels if no further chests land, rather they will ‘walk’ down one place on the reel until they walk off of the end of the reel. If other chests land during this process then the same will happen with them. The free spins only end when the last visible chest has walked off of the reels. 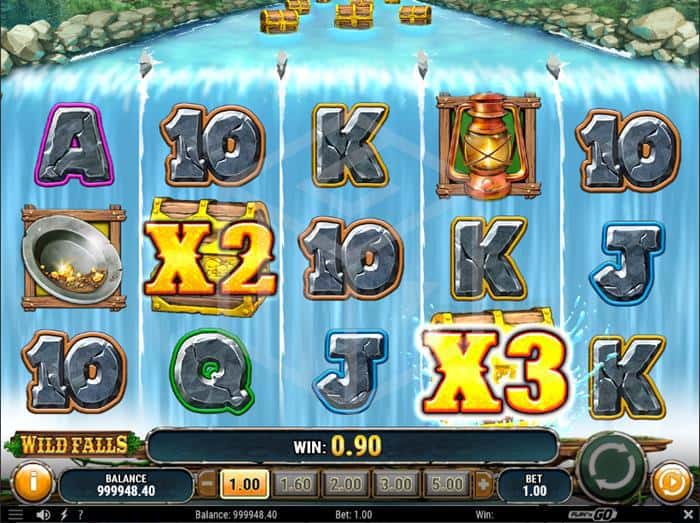 This feature occurs randomly when the words “GOLD RUSH” appear on the screen and all visible chests (bobbing above the game board in the river feeding the waterfall) will turn into Golden Chests. If one or two lands on the reels during this spin then they will have a multiplier of 2x, 3x or 5x in them which combine if they form part of a win together. As with Rapid Respins if a Golden Chest lands then a respin is awarded. If you manage to land 3 Golden Chests you will enter the Super River of Gold Free Spins feature.

This works exactly the same as the River of Gold Free Spins only in this instance all the chests will have a multiplier of 2x, 3x or 5x attached to them which can lead to a multiplier of 125x when combined. This is where it is possible to land a huge 10,000x win. 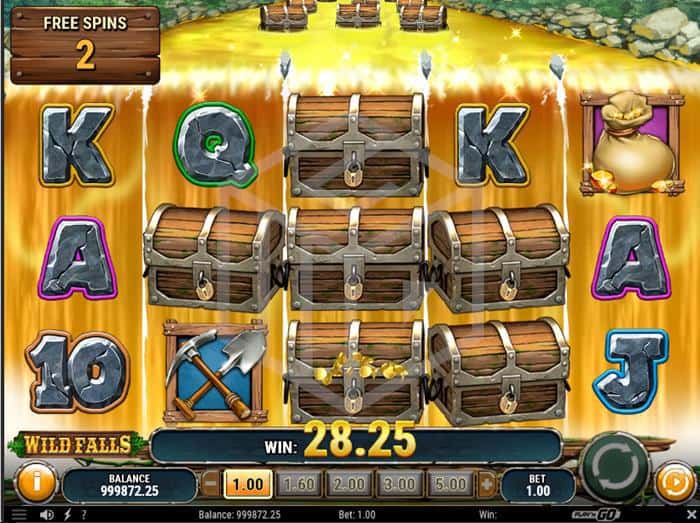 Our Thought on Wild Falls

Despite the simplicity of the design for a 2019 slot Wild Falls ticks pretty much every other box for us. It is an interesting them, it offers huge potential, it will keep the high volatility players happy (Play‘N Go have rated it 10/10 for volatility and it did seem pretty high variance throughout our test games), and it offers a few different features to keep you interested while you’re waiting for that (hopefully) big win.

On the downside, the Rapid Respins alone rarely pay much and often won’t pay at all, although I guess it is at least a more interesting way of delivering dead spins on a high variance game than just endless, featureless spinning. Hit the elusive Super River of Gold Free Spins and you can expect some rich, golden rewards.