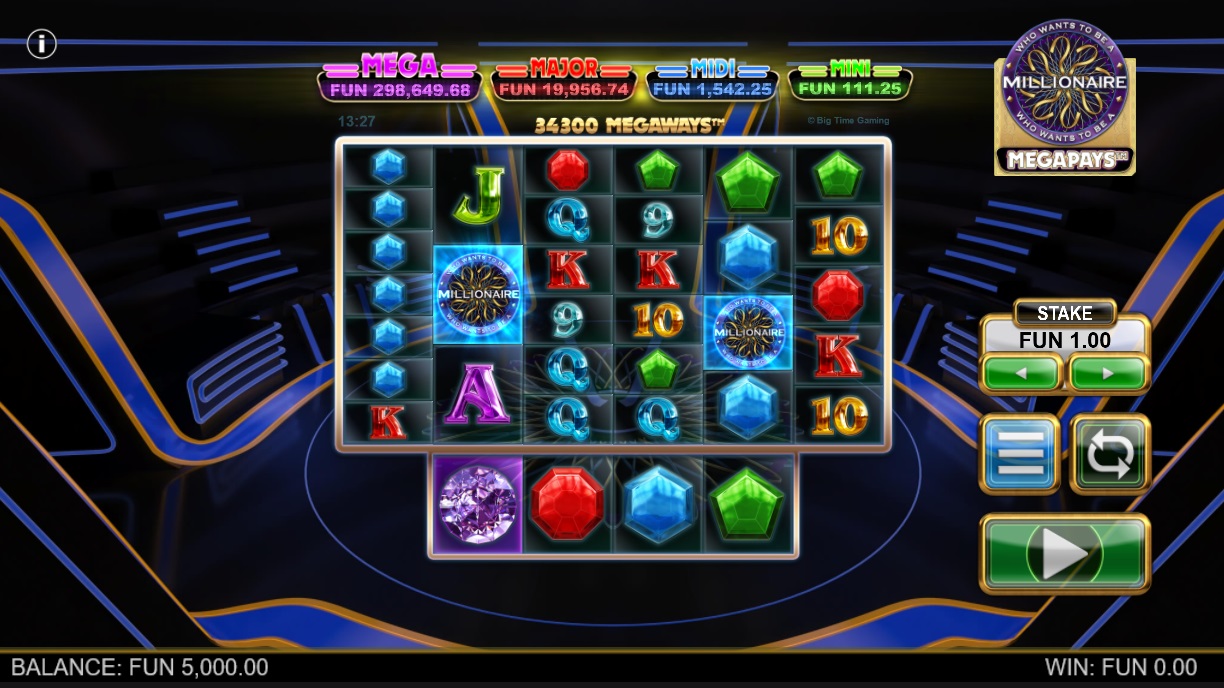 Hot on the heels of the introduction of the Megapays Progressive Jackpot slot with Bonanza Megapays comes to an upgrade to BTG’s biggest branded slot to date, Who Wants to Be a Millionaire Megapays.

As with the Bonanza version, almost every aspect of the upgrade is the same as the original. The only differences are a hike in the volatility from medium to high, and of course the addition of 4 progressive jackpots. The jackpots are reached via the Megapays Feature, a respin to win feature which accounts for 9.44% of the game RTP.

If you’re familiar with the 2018 original WWTBAM Megaways slot you know what to expect, and that is a branded Megaways slot that stays as true to the original TV show format as is reasonably possible. Stick around, however, for the description of the new Megapays feature, details of which can be found directly below this intro. 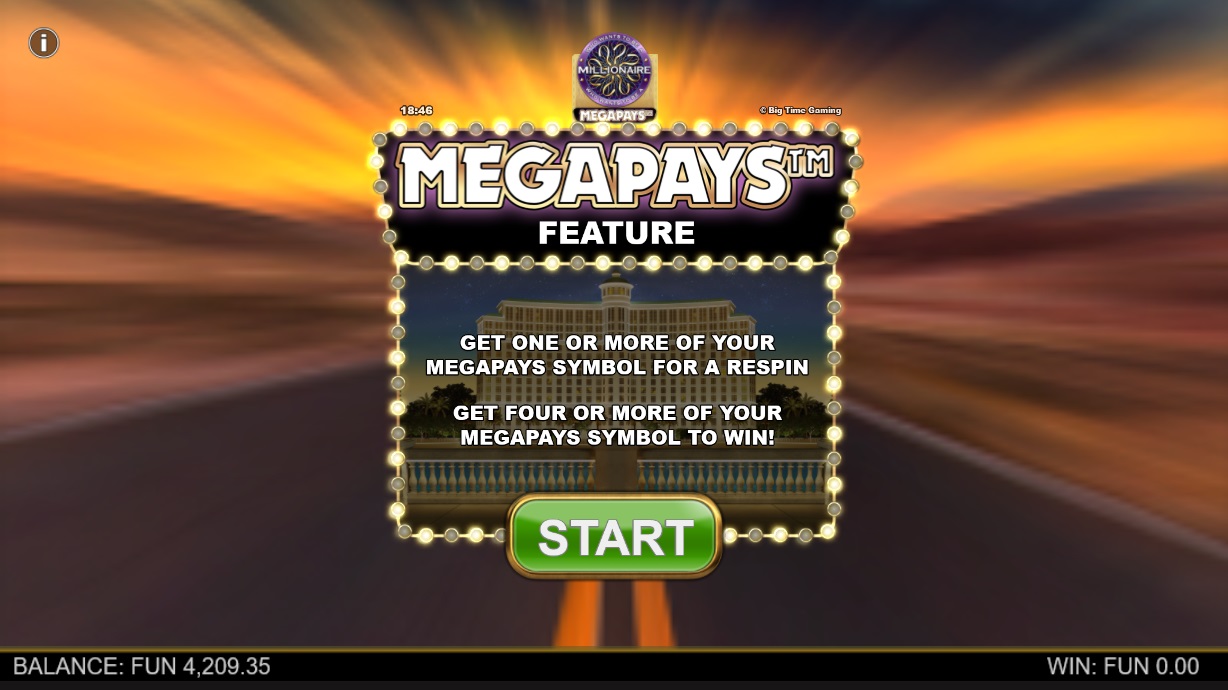 The Megapays feature is randomly triggered during any paid spin and its arrival is heralded by the famous BTG bell which rings to signal a big win. The action switches from the Millionaire studio to the bright lights of a Vegas-style hotel and casino. The gameboard locks into the maximum 117,649 Megaways with all 6 rows showing 7 symbols. The progressive jackpot meters for the 4 jackpots (Mini, Midi, Major, and Mega) are shown to the right of the reels. A progress bar runs up the left-hand side of the board and passes through the three smaller jackpot symbols in order of size, with the Mega Jackpot at the peak of the progress bar. 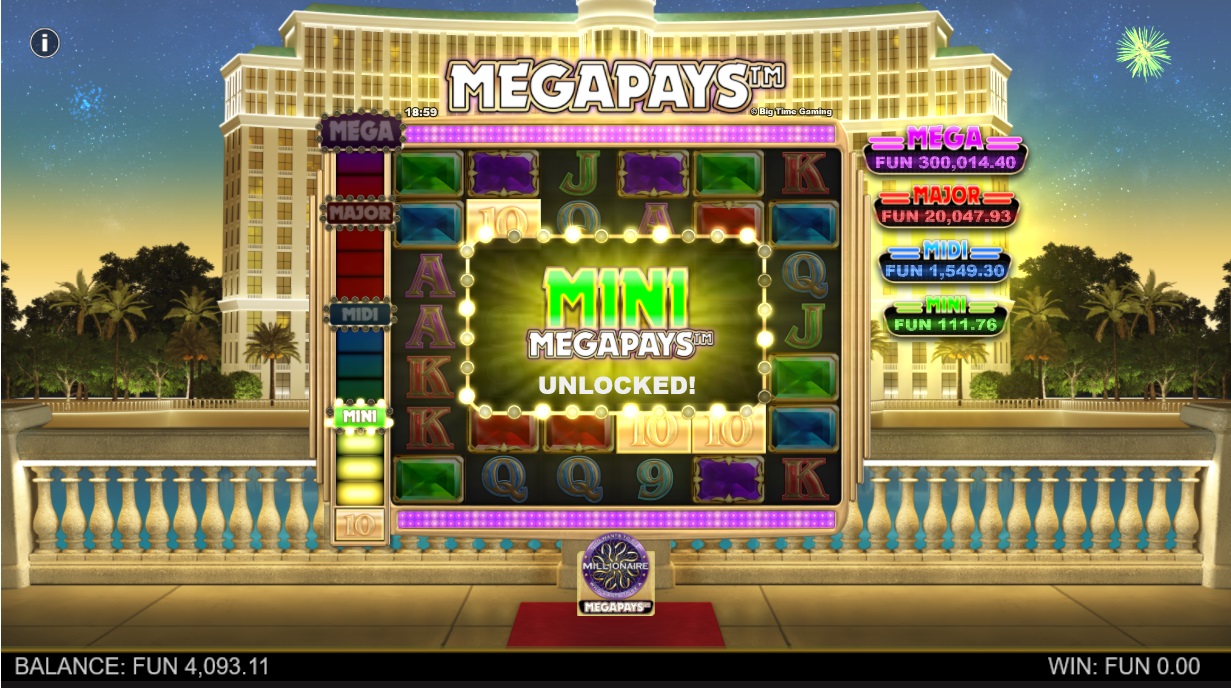 Each jackpot has a minimum guaranteed win known as the jackpot ‘seed’ which is the amount each jackpot resets to after it is won. The amount of Megapays symbols needed to reach each jackpot is as follows.

Of course, these jackpots increase every time a player spins the reels during the base game and the maximum win is not limited. The Megapays feature accounts for 9.44% of the game’s RTP and the contribution to each jackpot from every bet made is

As tends to be the case with progressive jackpots, the potential winnings remain the same regardless of the level of betting. However, the higher your wager, the more likely you are to trigger the Megapays feature.

For those unfamiliar with Megaways slots, the number of paylines, or in this case ‘Megaways’, changes every spin. During both the base game and the bonus games the 6 reels contain up to 7 symbols. The number of symbols on each reel can change with every spin. The maximum number of Megaways in this setup occurs when all 6 reels land 7 symbols on the same spin. 3 or more identical symbols on adjacent reels from the leftmost reel constitute a winning combo. As such the highest number of Megaways on offer here is when identical symbols cover all the reels when the reels are at max size. In other words, 7x7x7x7x7x7, or 117,649 ways to win.

In Millionaire Megapays, symbols cascade onto the reels rather than spin. After a win is added to your balance, the winning symbols explode to be replaced by symbols cascading from above. A winning combo caused by this cascade is called a reaction win. Reaction wins continue until no new winning combo is formed, after which the spin ends. The cascades occur during the base game and during free spins. 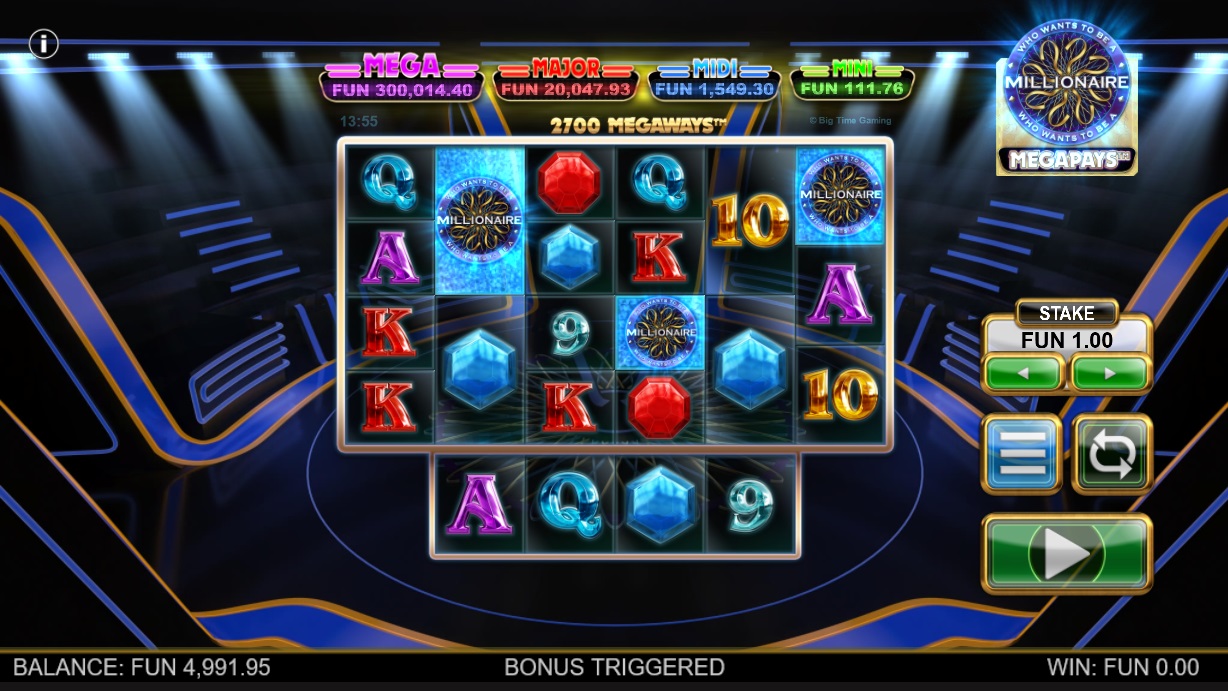 Before we get into the bonus round mechanics it might be worth explaining the general concept of the original game - and it’s about as simple as they come. The player in the hot seat is asked a series of questions with four possible answers, and for each correct answer, he or she moves one step up a cash ladder.

At certain points the player will reach ‘milestones’, meaning that once they have reached that amount of money, they are guaranteed that sum, even if they answer a subsequent question incorrectly. The closer you get to a new milestone, the more you stand to lose with an incorrect answer.

A player can choose to ‘walk away with whatever they have won at any time or choose to take the next question to progress further towards the ultimate goal of a €1,000,000 prize. Players also get a series of ‘lifelines’ to use during the game such as ‘phone a friend’, ’50-50’ or ‘Ask the Audience’ (hopefully all fairly self-explanatory) to assist in times of uncertainty. Now onto BTG’s slot version…

3 scatters (the Millionaire logo) triggers 8 free spins. Prior to free spins commencing, a game ladder (similar to the cash ladder in the tv show) appears to the right of the screen and three boxed images containing the game’s familiar ‘lifelines’ appear to the left. 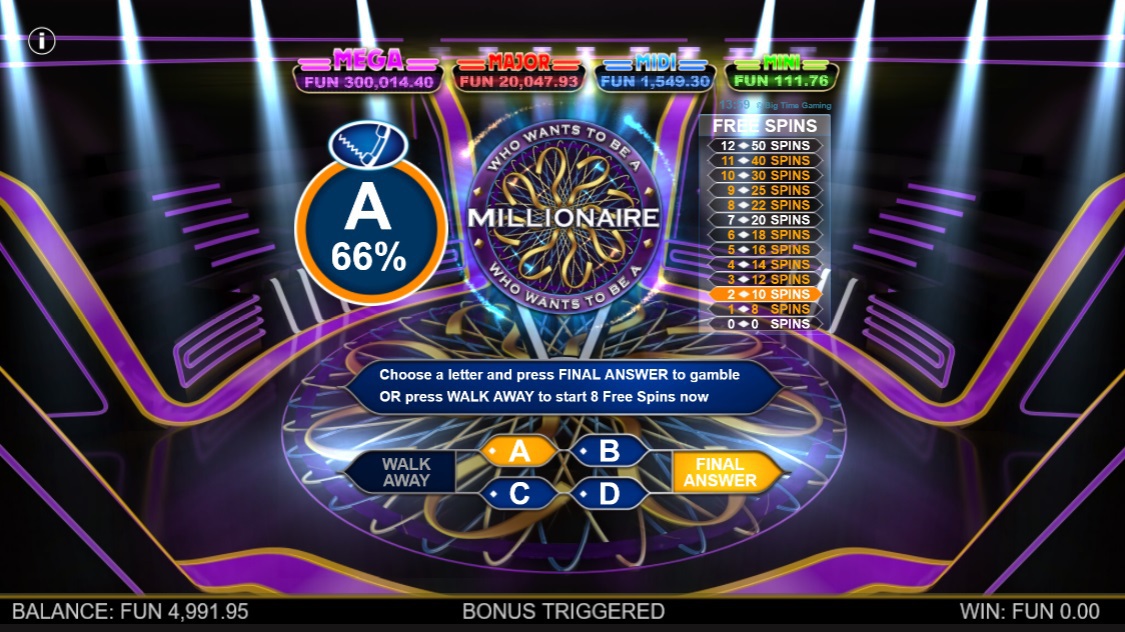 Any scatters landing on the triggered spin above the 3 required to launch the feature take you one rung up the ladder. One of the lifelines is chosen at random and alongside it a % chance of the lifeline giving you the correct answer (A, B, C, or D – there are no actual questions). At any point, you can press ‘walk away to take your current number of free spins or give a final answer in an attempt to move another rung up the ladder. The two ‘milestone’ rungs appear at the 10 and 20 spins mark. 50 free spins are available for reaching the top of the ladder. Free spins start when you walk away, reach the top, or get a question wrong once you’ve reached at least one milestone.

Free spins use the same board/mechanic as the base game. The only differences are that during free spins, scatters only appear on the horizontal row of 4 symbols and the introduction of an increasing win multiplier. Every winning combo adds +1 to the win multiplier (meaning the second winning combo will be multiplied by 2, the third by 3, etc). The win multiplier does not reset throughout the bonus round, it only increases. 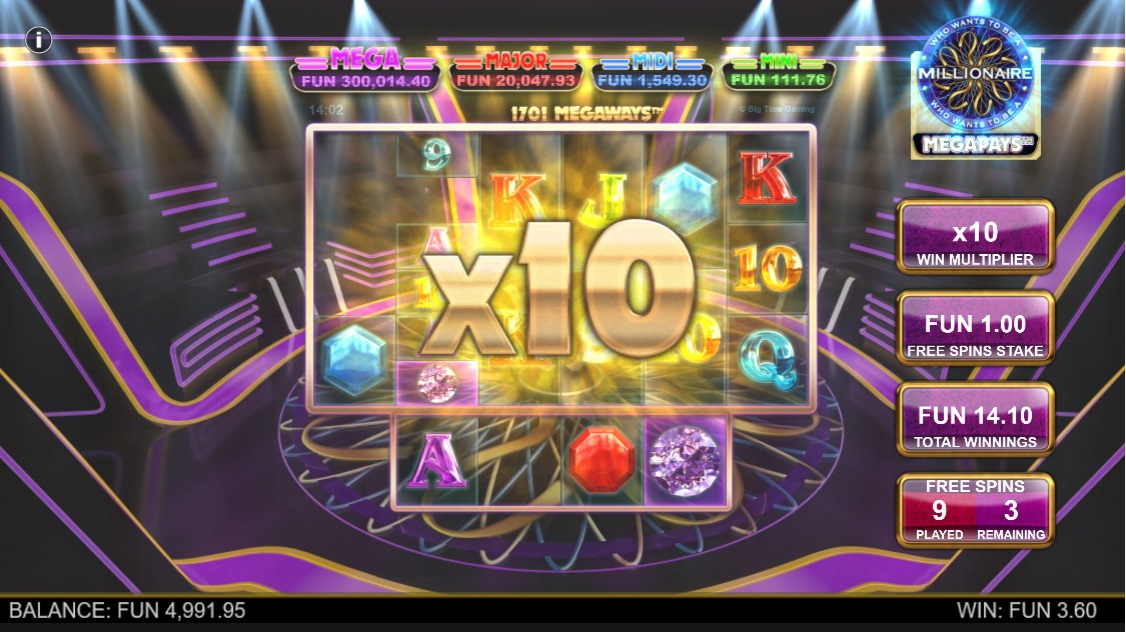 Look and Feel of Who Wants to Be a Millionaire Megapays

The look and feel of Millionaire Megapays is virtually identical to the original with the action taking place inside the famous WWTBAM studio. The soundtrack is also taken directly from the show, as are the various sound effects which all add to the game’s authenticity. As previously described, the reel set replicates the classic BTG 6-reel Megaways set-up. The only difference between this and the original slot is the constantly increasing progressive jackpot meters above the gameboard. Well, that and the Megapays Bellagio-Esque feature screen.

The symbols feature 9-A for the lows and 4 colored gems for the high-value symbols. As ever with BTG, the color purple is the biggie, with the purple gem symbol awarding a huge 50x the bet size for adjacent matching symbols on every reel. See below for the full paytable. 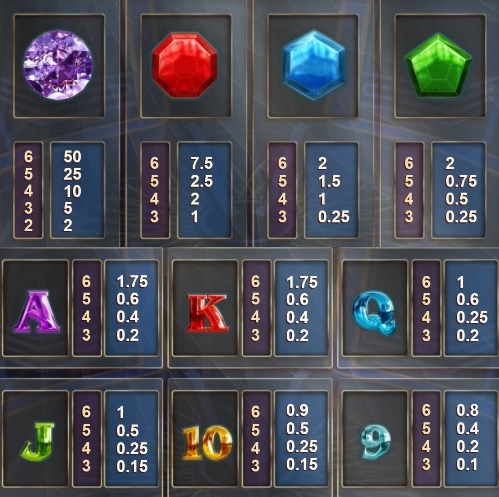 If you’re not too concerned about your RTP for the average session and you enjoy Megaways slots, then you’re going to enjoy this. It’s likely that the considerably reduced RTP for the average session will put off some players. However, any big jackpot hunters should welcome the chance to play one of the game's most beloved formats with the added bonus of a potentially life-changing payday. Also, although the chances of winning the big jackpot are pretty slim, they are still way more than your chance of winning a cool million on the original Millionaire Megaways slot!