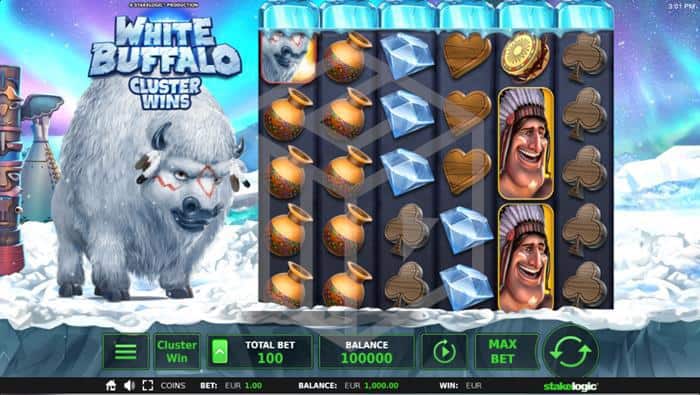 The background design and artwork are pretty impressive. To the left of the game board standing on a fresh layer of snow is a huge furry animated White Buffalo with tribal markings on across his cheeks and forehead, shaking his head and shooting the occasional icy-cold breath cloud from his large nostrils. Behind the buffalo is a nicely drawn totem pole and wigwam. Further back there are snow mounds and icebergs next to a gorgeous looking ice cold lake, while up above, the Northern Lights cast their magical dancing neon show in the skies while snowflakes gently fall all around. The game board itself, however, is a little bit ugly in comparison. It’s not that there’s too much wrong with it but it seems a little bunched up to house so many symbols and the dark grey reels are a bit of a let-down compared to the hard work which has clearly been put into the back drop.

The low-value symbols are wooden carved clubs and hearts, a tambourine and a vase. The higher value symbols are represented by a gold bar, a blue diamond, a Native American, and the White Buffalo. The White Buffalo is the biggest paying symbol who can pay out up to 1,500x your stake if you land a cluster of 30 or more. The wild symbol is a yellow W in a block of ice, and the scatter symbol is a golden, ancient tribal mask.

The main feature in White Buffalo Cluster Pays is a free spin round, but there is also a Shooting Star feature which can occur both in the base game and during the free spins. Also look out for the Extra Wilds feature. 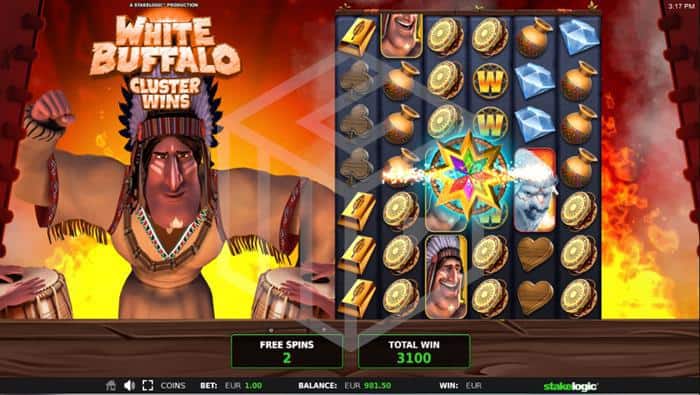 After any cluster wins the Shooting Star feature could be activated, whereupon a multi-coloured shooting star will come into view and land on one of the symbols adjacent to the winning cluster. Upon landing, the symbol over which the Shooting Star has stopped will turn into the symbol in the winning cluster, as will all other instances of that symbol which can create even bigger cluster wins. This can occur in both the base game and during the free spin round.

Extra Wilds is a randomly triggered feature which brings Extra Wild symbols (a gold W with a circular gold border) which will replace random regular symbols on any spin, turning them wild and guaranteeing a winning combination whenever they occur. 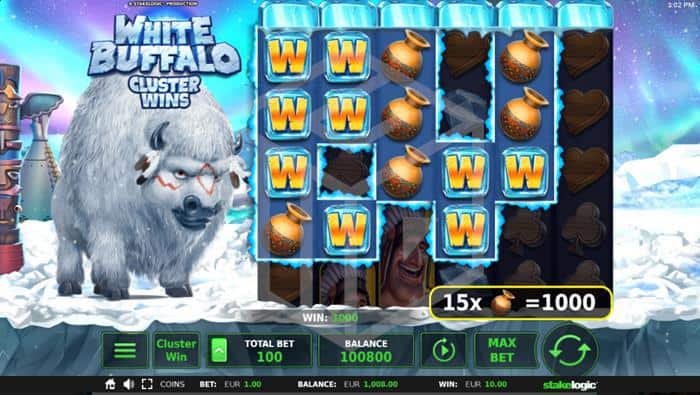 Not a bad game from Stakelogic here. Perhaps I was a little unkind about the game board graphics, but the rest of the landscape throughout the game is so visually impressive that to my mind the perfectly adequate symbols and the board does let the game down a little. Game play is average. A smooth enough experience and there are some good animation touches when you land a win. The free spin round can be good if you manage to retrigger for extra spins, and the shooting star helped me to get some very decent wins during my test play. At 95.66 RTP, however, this isn’t the best value slot on the market. Not the most amazing playing experience, but certainly not the worst. Overall I would give White Buffalo Cluster Wins a thumbs up for the design work alone, and the actual game’s not too bad either!