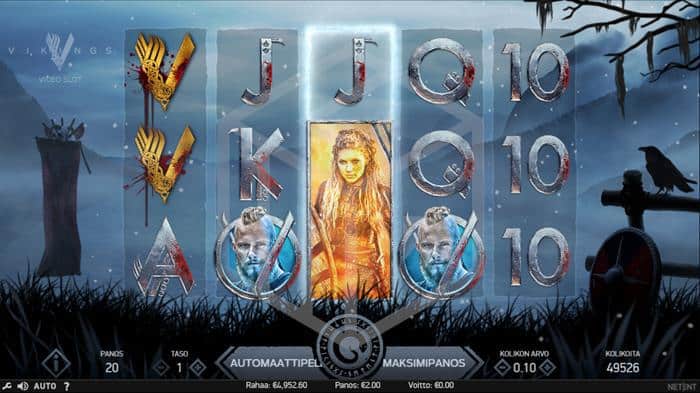 With all the hype surrounding this release NetEnt had to go all out to make sure this game looked good, and boy did they deliver! Vikings is visually stunning, something you’re alerted to early on if you watch the big budget movie style intro (please do!). That's where blood-spattered cinematic images of the main characters (using actual images of the main TV characters) are interspersed with images of a Viking ship making its way across the high seas before you’re beckoned into the landing screen.

You then make your way out to the banks of a dusky, wintry lake surrounded by desolate, uninviting hills whereupon the game board appears centre-screen, obscuring the Viking ship slowly making its way across the placid, icy waterway. Chilling incidental music and the occasional battle cry complement the undeniable air of menace created by the exceptional design.

The low-value symbols are the standard 10, J, Q, K, and A, each blood splattered and forged out of iron, while the higher value symbols are represented by characters from the series. For those unfamiliar with the series and character names we’ll call them by the colours in which they appear; Grey, Blue, Yellow, and Red, all of which can appear as single or expanded symbols on the reels. The highest value symbol is the golden V from the start of the title and a 5 combination across the reels pays 2.5x the bet size. The other symbol you’ll see is the scatter, a Viking shield with the words ‘RAID SPINS’ emblazoned across it.

The base game and bonus game both have a random feature called the ‘Sheild Wall’ as well as an ever-present ‘Hotspot’ feature. The bonus round is a free spin feature triggered by landing 3 scatters.

This feature can be triggered randomly both in the base and bonus game (although you’re way more likely to see it in the base game) and consists of a cluster of Viking Shields covering an area of either 3x2 or 5x2 which can anywhere on the reels. Positioned correctly this simple feature can be a decent money-spinner. 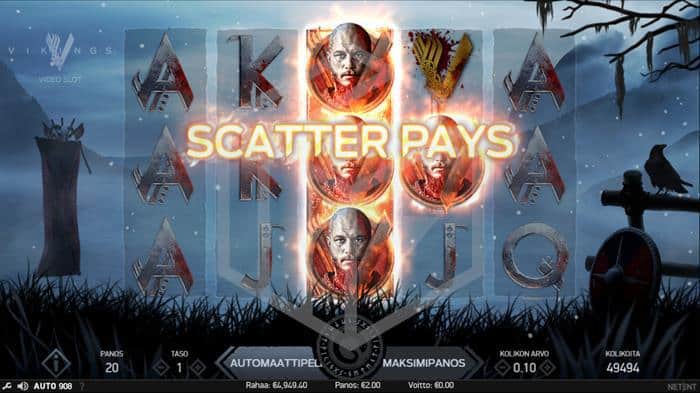 In the base game if a fully stacked character symbol lands on the third reel (the hotspot) then all other character symbols on the board transform into that symbol and are all combined to create a “scatter pays” win.

In the bonus game (which takes place on a 7x5 board) the hotspot occupies a 3x3 section in the centre of the board. If any stacked character symbol lands within one of these three reels then once again all other character symbols on the board will transform into that character.

The free spin round is triggered by landing 3 of the Raid Spin scatters, whereupon you’re awarded 7 spins and transported to a 7x5 reel board which expands the win ways to 78,125 ways. Furthermore, as already detailed, a permanent 3x3 hotspot sits in the centre of the board and has the potential to make huge wins if activated – up to 10,000 the stake in one spin in fact. 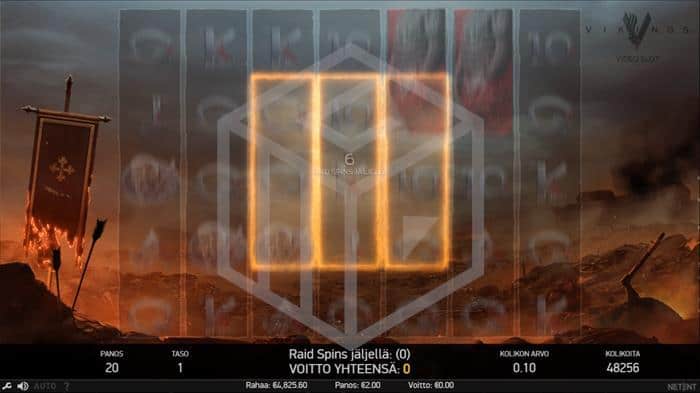 Our Thoughts on Vikings

NetEnt has served up an impressive slot with their interpretation of Vikings. It stays impressively true to the original TV series in terms of visuals, mood, and entertainment value, and for a high volatility slot, it appears to offer more opportunities to win during the base round than many.

That said, the bonus round is tough to come by and can be a disappointment but I guess you can’t have it both ways.

Personally, I prefer this type of high volatility slot as you aren’t consigned to utter boredom during the long periods you’ll be in the base game, and although the bonus round doesn’t always deliver, it has great potential and during my stint playing it, I was able to convert some truly impressive wins.