Vikings go Berzerk by Yggdrasil Gaming released on 23.11.2016 is a 5-reel & 4-row online slot with 25 paylines and a 96.10% RTP. This is a viking-themed game offering players a max win of up to 5000x their stake. Vikings go Berzerk can be played on all devices from €0.2 to €100 per spin and is considered a medium volatility game.

The symbols on the reels are all theme related and feature the four main characters as the highest paying symbols. Each character is a menacing looking Viking.

The low-value symbols are represented by gold, silver, and bronze coins from the Viking era. The scatter symbol shows a blond mermaid surfacing from the sea. The wild symbol has the word ‘wild” written on top, and it can substitute for all other symbols except for the scatter. There are also two treasure chest symbols that only appear on reels four and five.

When it comes to special features in Vikings Go Berzerk, the players will truly be spoilt for choice. Here you will find different rounds of free spins that can be triggered in multiple ways during the base game. 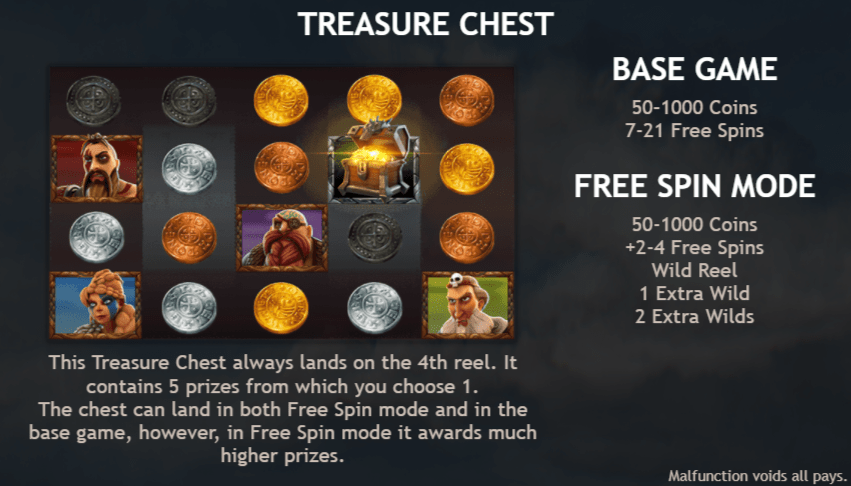 Two kinds of chest symbols can land on your reel:

Whenever a treasure chest pops up on either reel four or five, you as a player will have a bonus game to pick from, since you won't know the outcome before you choose. Choose wisely, as we're pretty sure most of you will be hoping for some free spins here!

The free spins feature is triggered by landing three or more scatter symbols anywhere in view. The number of free spins awarded depends on the number of scatters landed.

When the spins are underway, each Viking character landing on the reels will be attacked by the sea monsters. If the character manages to fight the sea monsters off, then that character will become a sticky wild which will remain in place for the rest of the spins.

This feature can be triggered by the golden treasure chest or the free spin picks. On Ragnarök, each Viking character landing on the reels will become a sticky wild and will remain in place for the rest of the spins. This can potentially fill the entire screen with wilds and give a huge pay-out.

As mentioned, the main character also appears on the bottom of the screen, each with a rage meter.

The rage meter will go up every time a winning combo is made with that particular character. When the meter of a character maxes out, 7 free spins will be awarded. However, now the maxed Viking is berserk. So every time it lands during the free spins, it will beat the sea monster and turn wild.

Vikings go Berzerk is a medium to high variance slot with an RTP just over 96%. The maximum win on a spin can go up to 4,000 times the stake. The game stands out from its predecessor thanks to its new and unique features that give it the potential to give prizes to all players.