Viking Runecraft by Play'n GO released on 27.04.2017 is a 7-reel & 7-row online slot with cluster pay and a 96.7% RTP. This is a Viking-themed game offering players a max win of up to 5000x their stake. Viking Runecraft can be played on all devices from €0.1 to €100 per spin and is considered a high volatility game.

What you Need to Know

The Viking Runecraft slot machine has a unique reels set, with high volatility and an RTP of 96.7%. The max win possible on a spin goes up to 5000x the stake. This slot game plays out on a 7×7 grid, with minimum and maximum bets ranging from 0.10 to 100, depending on the currency played. The theme of this slot game revolves around the Nordic Gods Thor, Odin, Heimdall and Freya, who also happen to be the main characters of Viking Runecraft. Each of these characters appears on the different levels of the casino game. On each new level, a different wild pattern will appear on the reels, and you must fill the patterns with wins in order to move to the next level. On the left-hand corner of the screen, you will find a meter bar that randomly triggers features called Charge of Destruction feature, but we will talk about this later. 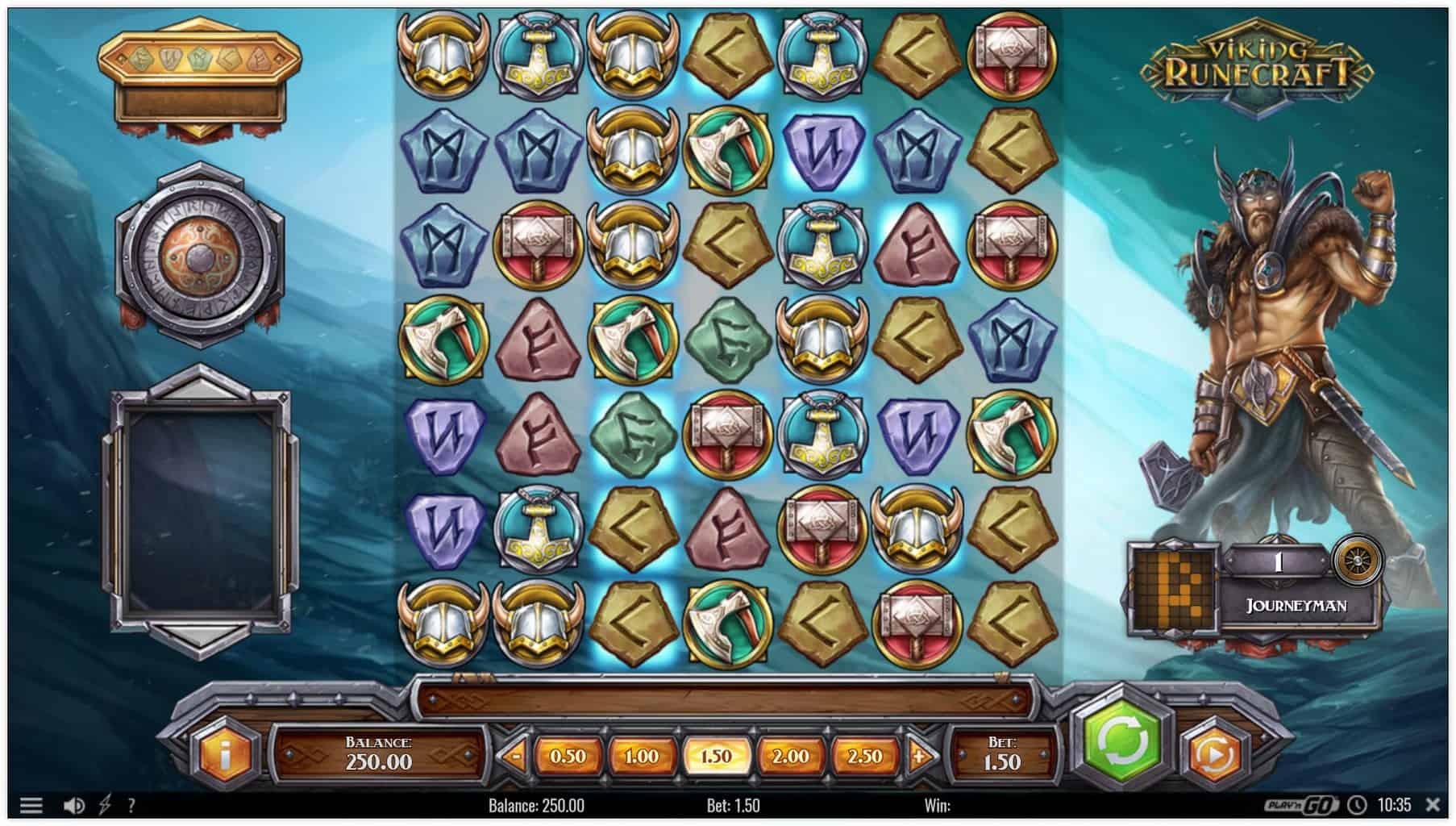 The video slot game does not have any fixed pay lines. To get a win the player needs to get five or more matching symbols in a row. The symbols can be horizontally or vertically to each other in order to make a win. Winning symbols are removed and new symbols cascade down. The same thing will continue until there are no more winning combinations. The high-value symbols on the reels all relate to the theme. The symbols feature an axe, a helmet, a hammer and a medallion. The low-value symbols show Nordic letters engraved in different coloured stones. The game has no scatter symbols. The wild symbols come as golden symbols and they appear differently, depending on which God stands on the right-hand corner of the screen. Each God gives wilds in different forms, and these wilds can substitute all other symbols.

Gift of the Gods Feature

The slot game has different levels. On each level, a new God will appear on the right-hand side of the screen. You can reach a new level by clearing the patterns highlighted on the reels. Each level has a different pattern. The patterns are made by different frames. Every time a symbol, that sits on a frame, is part of a winning combo the frame the symbol sits upon will be highlighted. To clear a level you need to highlight all the frames that make the pattern. On each level, a random trigger will allow the gods to award wilds after a non-winning spin. 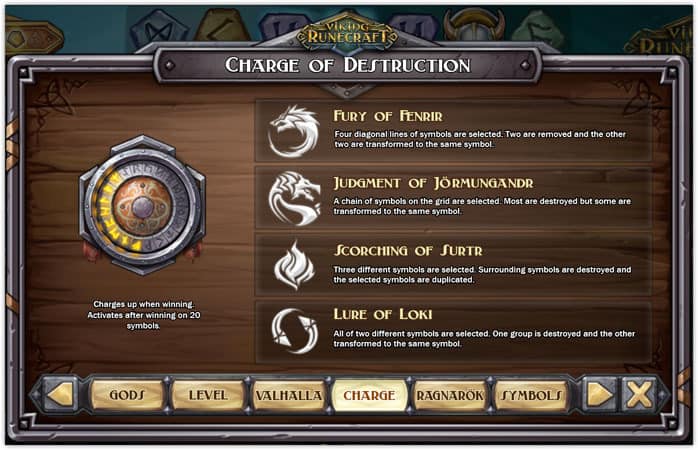 Every consecutive win will charge the circular meter to the side of the reel set. Fill up the meter to randomly activate one out of four bonus features. The features are:

After one of the four Charge of Destruction features plays out, the charge meter goes back to normal and players can recharge it again. 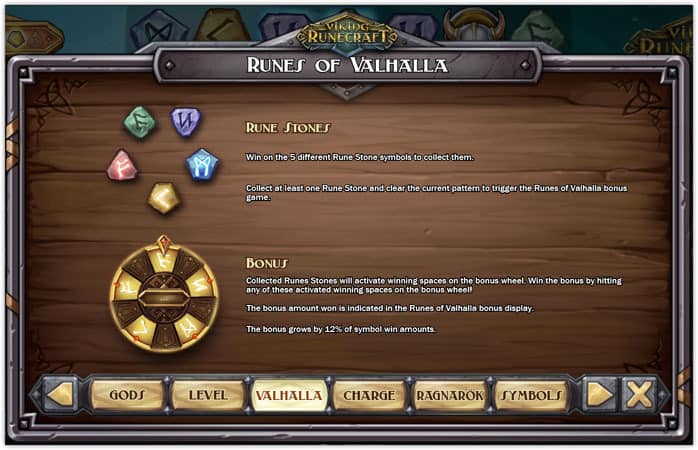 Finally, there is one last feature on the Viking Runecraft slot machine. This feature relates to the second-meter bar on the left upper corner of the screen. The bar shows all the low-value symbols. And each win with a low-value symbol will highlight that symbol on the bar. On the bottom of the bar, there is a cash amount that grows with 12% of every winning combination. When you clear a pattern and have at least one symbol on the bar highlighted, the feature will trigger. A wheel of fortune will appear on the screen. The more symbols on the bar highlighted the better the chances to win on the wheel will be. Players will spin a wheel where if the arrow lands on an active and lit symbol the player will win the corresponding bonus amount.

The slot might seem complicated at first, due to the many features it includes. However, once you start playing, it becomes pretty easy and fun to play. Plus the potential for huge wins is extremely big. When it comes to the design and graphics the slot is top notch, and the gameplay is excellent as well. All in all an amazing slot game that will keep you engaged.