Ancient Rome has opened their doors and welcomed you into their land with Netent’s slot game Victorious. Help the Roman soldiers out by spinning your way to both your and their victory. Come out triumphant from the ancient Roman battle in Netent’s classic slot. By taking a quick glance at the background images and music of the game, you will notice the very obvious theme of this online slot: Ancient Rome. Victorious is a 5x3 slot game with a 96.9% RTP that can pay 45,000 coins on a single way with the highest stake level. One of the great things about this high volatile online slot is that it has a massive 243 bet ways which are always available both in the base game and in the free spins round. 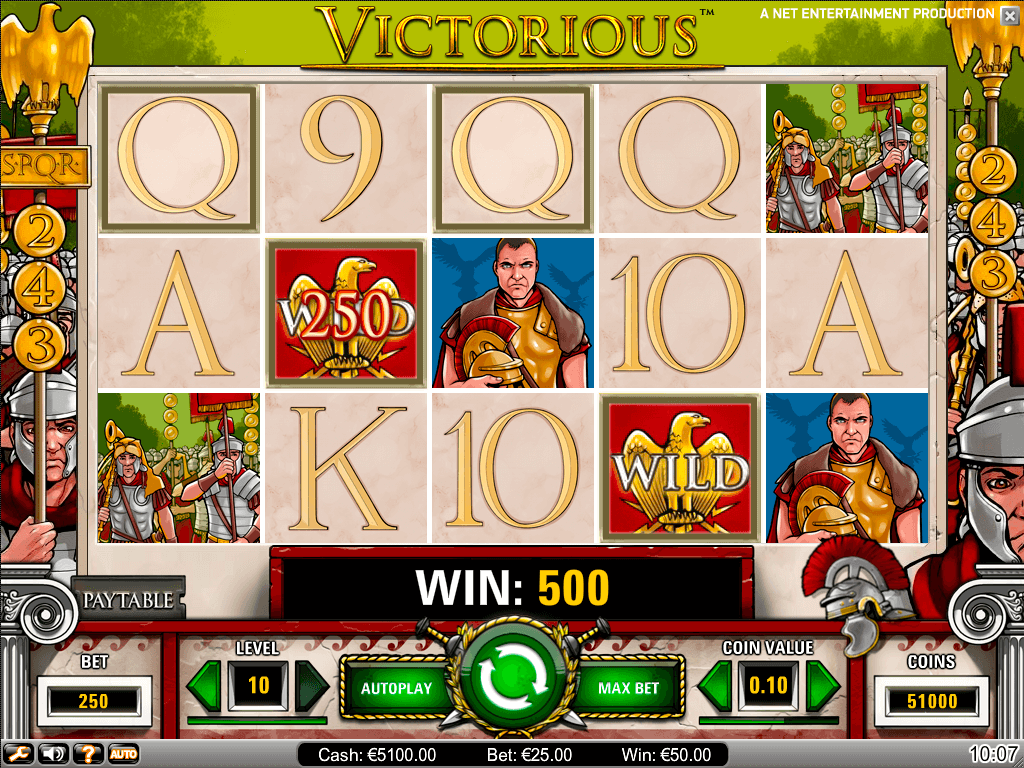 The first thing that grabs our attention is the symbolic ancient roman S.P.Q.R in the background of this slot. Senatus Populusque Romanus, which coincidentally is the official emblem of the ancient Roman government that is meant to remind us of their empowerment. A nifty feature within Victorious is the wild symbol that substitutes for all characters within the slot game. Yes, ladies and gents, all symbols including the free spins symbol. This symbol will pay 50x your total wager for a full line. The highest paying standard symbol is Caesar, who will award you 1500 coins for five of a kind. The low paying symbols are the golden A to 9. The music ties in quite well with the theme of Ancient Rome. We can hear horns, drums and a salutation for every win.

There is only one major feature in Victorious, the free spin bonus which can be triggered by landing three of the wreath scatters on subsequent reels starting from the left-hand side. Well actually they do not have to be exactly wreath scatters, since the wild substitutes for all symbols including this one. The number of spins depends on the number of scatters landed. With three giving 15, four giving 20 and five giving 25 spins. All wins gained during this round have a 3x multiplier. During the feature round, you can retrigger an additional number of spins if you land three, four or five scatters on subsequent reels starting from the left-hand side. According to how many symbols you land on your reel, you will get 15, 20 or 25 extra spins respectively.

Even though there was not much going on in terms of special features in Victorious, the 243 bet ways are what really grabbed our attention here. We liked the fact that these bet ways were available both in the base game and in the free spins round. We enjoyed this games so much that the background music did not even annoy us one bit. The only thing that might have kept us playing a bit longer is another special feature.