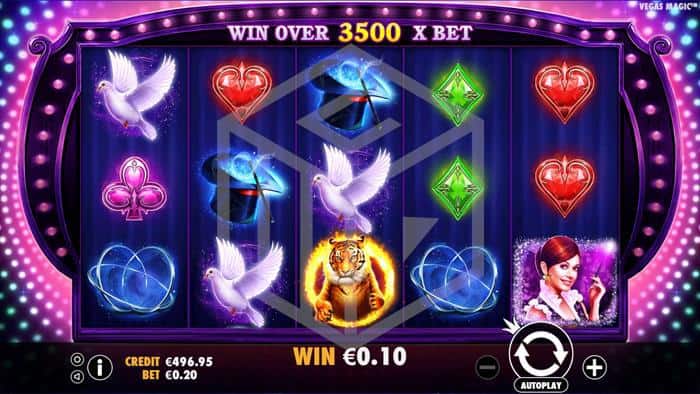 Pragmatic Play knows how to produce a good looking slot, and Vegas Magic certainly looks the part. The backdrop to the game is all neon lights and flashing bulbs in blues and purples, and the Vegas Magician (who is also the game’s wild symbol) looks like a combination of David Copperfield (the magician, not the Dickens character) and Derren Brown. With his intense stare, coiffured hair and camp stage outfit he looks the epitome of the Las Vegas stage magician. The music playing while you spin the reels also comes straight out of the David Copperfield stage show playlist – an intense, dramatic build-up which you can imagine accompanying one of his elaborate “dangerous” illusions in order to wring out every drip of suspense.

There are pickings on the features front for Vegas Magic with just an expanding wild and tumbling reels with progressive multipliers to break up the spins.

Vegas Magic makes use of the tumbling reels with progressive multipliers feature we have seen in numerous other games, the most famous of which will be Gonzo’s Quest. Whenever a win rolls in the symbols which form the win will disappear and new symbols will tumble down from above to fill the vacated spaces on the game board. If the new symbols help form another win then that win will be doubled and once again the tumbling reels will do their stuff. If another win comes in another multiplier is added and the win will be tripled. This will continue for any further wins which arise from this process with an additional multiplier being added each time until no more wins are forthcoming. 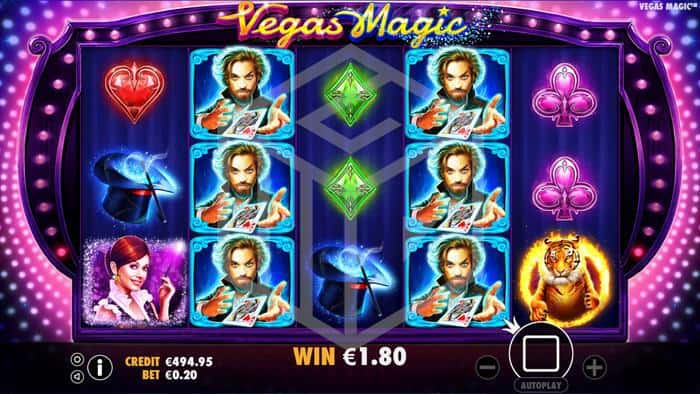 If a wild appears anywhere on a reel where it could help make or enhance a win then it will expand to cover the entire reel. After the first win whichever parts of the expanded wild which formed of the win will disappear and be replaced by the tumbling reels feature. If, however, part of the expanded wild wasn’t part of the win then it will remain in place as a smaller wild and will not expand again during this spin.

Our Thoughts on Vegas Magic

While Vegas Magic conjured up a great looking game with attractive visuals and a potentially strong theme I have to be honest and say that I found the game a little underwhelming. The reason for this is simply the absence of a strong bonus round or free spins, and this surprised me somewhat as Pragmatic Play are renowned for packing their games with great features. What they do have I like and when the tumbling reels and the progressive multipliers combine with the expanding wilds you can pull in some decent wins but to me, Vegas Magic needs at least one more solid feature to live up to its potential, and I believe that it is a slot with plenty of potential.