Vegas Diamonds by ELK Studios released on 06.11.2018 is a 3-reel & 3-row online slot with 5 paylines and a 96% RTP. This is a classic-themed game offering players a max win of up to 2000x their stake. Vegas Diamonds can be played on all devices from €0.2 to €100 per spin and is considered a high volatility game. 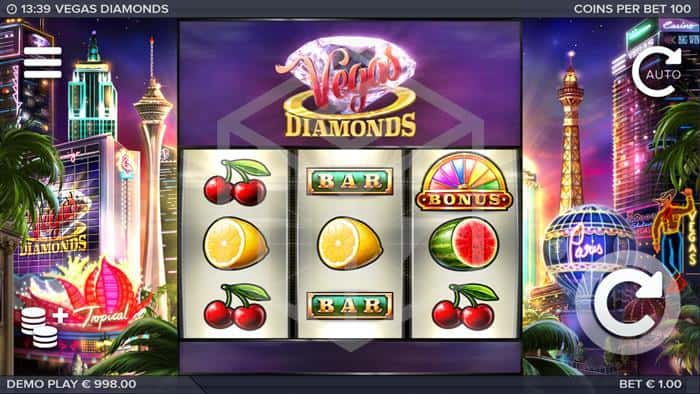 While there’s not much you can do design wise within the confines of a retro 3x3 reel slot, replete with its white reels and old school fruits and bars symbols, ELK has done a good job of setting the Vegas scene in the graphics and animation surrounding the game board. Either side of the board is superbly detailed static images from the Las Vegas strip of brightly lit, enticing looking hotels and casinos illuminating the night sky. Directly above the 3x3 symbols is a large screen, almost the size of the reels showing a moving animation which passes by the glorious fountains outside the Bellagio, tracks a white stretch limo pulling away from a wedding chapel, and offers up numerous images of the Las Vegas skyline. The screen is also used to highlight wins made on the board below, and once again to display the Wheel of Fortune used in the bonus round (more of which later). The soundtrack has a suitably Vegas feel about it, and in the background, you can just about make out a cacophony of a crowd of fun-seekers as they cruise through the town.

The lower paying symbols are cherries, lemons, and watermelons, with single, double and treble BAR symbols making up the higher values. The highest value symbol is the Vegas Diamonds logo, which carries a 30x bet size win for 3 on a pay line. The bonus symbol is a half wheel of fortune with different coloured segments and with “BONUS” emblazoned across the base – three of the bonus symbols anywhere in view will activate the bonus round. Other symbols are the wilds, which all have a multiplier of between 2x to 5x attached. The multiplier wilds only appear on reels 1 and 3. 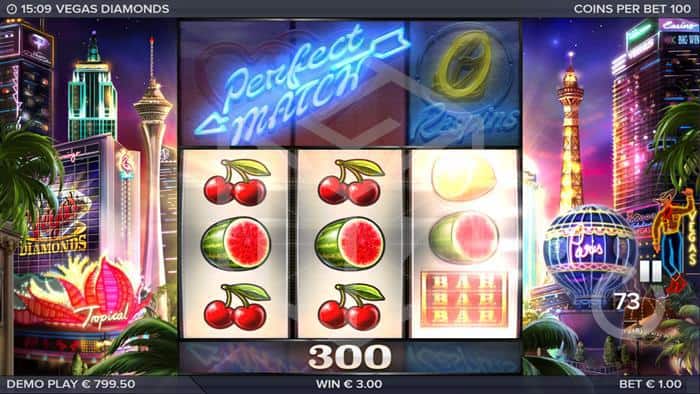 If identical symbols land on the first two reels then Perfect Match Respins will be triggered, giving you 3 respins on the third reel only (the other two matching reels are held in place), and plenty of opportunities to bag wins throughout the respins

If you manage to land 3 Vegas Diamond symbols anywhere in view then nudges will activate to align all 3 on the centre line for a 30x win.

Land three bonus symbols anywhere in view and you’ll be awarded 3 guaranteed winnings spins on the Vegas Diamond Fortune Wheel which takes place on the animated screen above the reel set.

The wheel has Bronze, Silver, and Gold levels. Your first spin takes place on the outer level (Bronze) where you can win up to 100x your bet size. You can reach the higher levels if your spin lands on an arrow pointing up. Get up to the Gold level and wins of up to 1,000x the bet size can be won. Furthermore, among the cash rewards and arrows, you can also land on free spin squares. Land on one of those bad boys and you’ll be awarded 5 free spins, each with a 5x multiplier. If you manage to land any bonus symbols during your free spins then each one will grant you another spin of the Fortune Wheel. 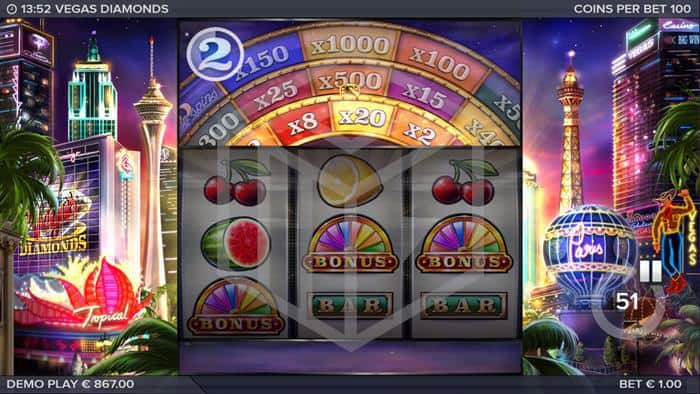 Our Thoughts on Vegas Diamonds

I have to admit, I had to come into this review with an open mind as 3x3 reel slots are simply not my thing. Personally, I left them behind in the 1980’s when I used to frequent the local amusement arcades in my hometown. However, I know they certainly have a market and have been pretty popular among streamers and grinders alike so I decided to take Vegas Diamonds as I found it – and to be honest I was pleasantly surprised.

Things got off to a dodgy start as the high volatility aspect of the game hit me square in the face and I thought I was destined for a never-ending session of blank reels and no features. Eventually, however, the big wins started to roll in and the lean times I endured during my first half an hour of dead reels ended up being more than compensated as I started getting in the Fortune Wheel fairly consistently for some decent wins. I also found the multiplier wilds came to my rescue on numerous occasions. The design and feel of the game also aided the overall experience significantly.

So while I wouldn’t say I’ve been converted to a 3x3 fan just yet, I’m happy to acquiesce that Vegas Diamonds is a worthy addition to their collection and will no doubt be a hit with their army of fans. I just hope next time they release something with a larger reel set and get to work their magic on a board with more possibilities, because if they can make me almost like a 3x3 slot then who knows what they could do on a 5x3?