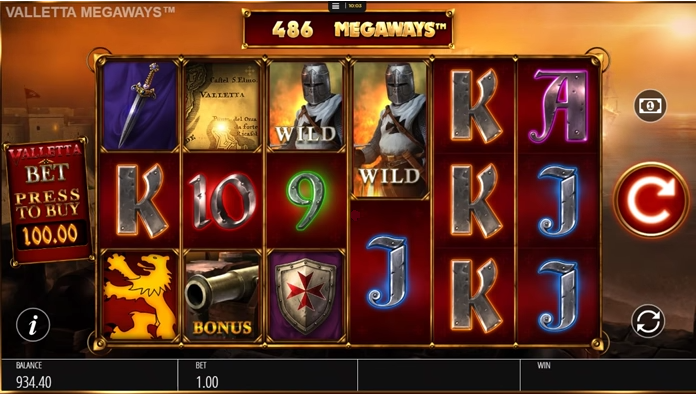 Blueprint rarely disappoint with their design work and Valletta is another good showing from the UK based providers. The sepia-toned opening sequence shows a battle taking place near the coastline.

Kegs of gunpowder feed the cannons which are firing out to sea from atop castle defences. In the distance, a fleet of enemy galleons are ablaze whilst attempting to come ashore. The soundtrack is suitably epic and very similar to any number of other battle-themed slots.

The game board then appears centre screen, framed in bronze with blood-red reels. The standard royals 9-A represent the game’s low-value symbols.

The high-value symbols are swords, shields, maps, and lions. The lion emblem is the highest value regular symbol with 6 across the board paying 25x the stake. The wild is a Knight and the scatter is a cannon.

Three base game modifiers enable play; Valletta Streak, Extra Wilds, and Extra Scatters. Free Spins are where the big wins lie and there is also a Buy a Bonus feature.

Any keen "slotsmiths" will realize that Blueprint have replicated the special features from last year’s big hit; the Napoleon: Rise of an Empire slot 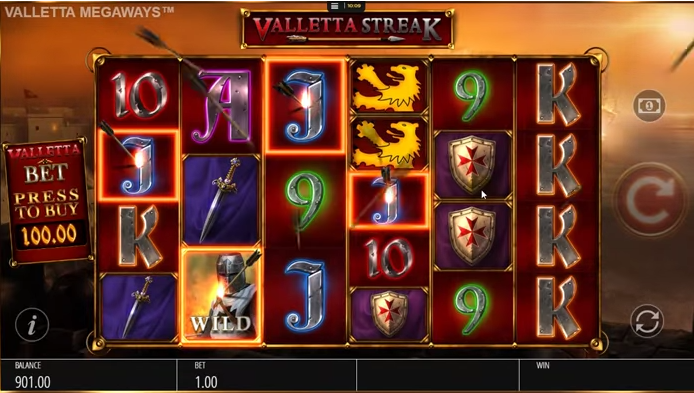 This is probably the most important feature of the game as it not only appears as a base game modifier, but it is also vital during the free spins round. In the base game, a Valletta Streak is randomly awarded after a winning spin.

The Valletta Streak only ends when no new winning combo lands.

The arrow storm feature is triggered randomly on winning spins. When triggered the arrows will hit the reels, pinning different symbols. Any symbols that are hit during the arrow storm become sticky, while their spinning reels come to a halt. Reels without arrows continue to spin, improving your chances of winning big.

Awarded randomly after a win in the base game the reels spin and wild symbols are added to numerous positions on the reels. Wins can be made when the reels come to rest if enough of the added wilds are in view.

This is essentially the same as above only using the scatter symbols rather than the wilds. 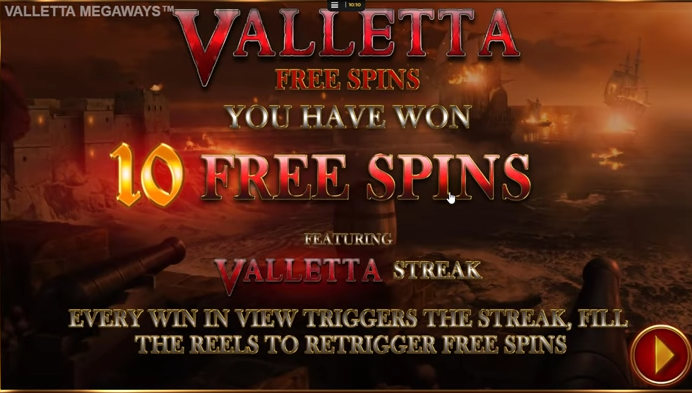 Landing 3, 4, 5, or 6 scatter symbols triggers the free spins feature. The feature awards 10, 12, 15, or 20 free spins. During free spins, the Valletta Streak feature is active on every spin which can lead to lengthy free spins round and a good collection of wins.

Additional free spins are awarded if you fill the board with winning symbols.

You can also buy the bonus feature in the Valletta Megaways slot; a "bonus bet" at 100x your stake. When you buy a bonus you're taken directly to the free spins bonus feature after the reels spin up the paying symbols, guaranteeing a win.

If skipping the grind, paying a premium to access the free spins feature directly, check out our list of the best bonus buy slots here.

Our Thoughts on Valletta Megaways

Blueprint Gaming has produced another handsome, playable slot with great potential with Valletta Megaways. As ever the design, animations and artwork are all on point.

With regards to Blueprint titles, they're adept at making good use of their best features so I wasn’t especially surprised to see the features from Napoleon replicated here. In fact, I thought it was a very smart move.

Using popular features to ramp up the excitement of a Megaways slot, even more, can only be a good thing. People love having a plethora of winning combinations at their hands when playing slots.

Valletta Megaways is another solid slot from Blueprint – not spectacular, but a worthy addition to their impressive portfolio.