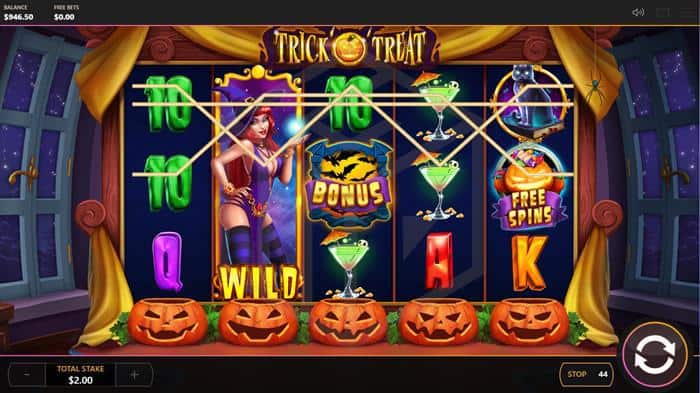 Trick ‘O’ Treat benefits from a great design and a fun theme, although the main character, the Sexy Witch is perhaps a little more risqué than your average slot with her skimpy lingerie outfit, and her noticeably bouncing bosoms! The action takes place in an upstairs room in a haunted house with the occasional ghost appearing from behind the wooden framed game board, a board which also has a row of carved pumpkins beneath the bottom row of symbols (but more of those later). The lower value symbols are taken by the standard 10, J, Q, K, and A while the higher value symbols take the form of a slime green cocktail, an Owl with shining white eyes, a witch’s broomstick, and a black cat. The highest paying symbol is the three-row high wild (all wilds are expanded, covering up to three rows depending on where they land) which is of the aforementioned Sexy Witch with her revealing outfit, floppy hat, and tumbling red locks of hair – a full board of those will pay out 1000x the spin stake. Other symbols include a bonus symbol which appears on reels 1, 3 and occasionally 5 which shows a colony of bats flying past a stone framed window, the free spin symbol of a pumpkin filled with candies, and the Trick ‘O’ Treat bonus symbol of a witch flying past a full moon. There is also a playing card symbol which, if it lands, it usually lands in abundance and will all turn to reveal the same random symbol. Finally during the free spin round, you will see some purple and yellow wrapped candies appear on the reels from time to time.

Trick ‘O’ Treat has a couple of good, fun, and occasionally lucrative features – namely the Trick ‘O’ Treat bonus and the free-spins bonus, both of which can pay up to 1000x the spin stake. 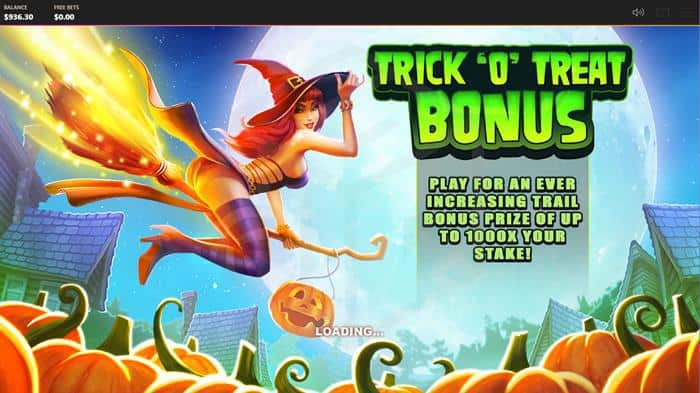 The Trick ‘O’ Treat Bonus is triggered by bonus symbols or rows 1 and 3 and the Trick ‘O’ Treat bonus symbol landing on row 5. You’re whisked away to a new screen showing a winding path through a spooky town where each house along the way is given a higher multiplier number, all the way up to 500x – somewhat reminiscent of one of the special features in another Red Tiger game, Lucky Halloween. The Sexy Witch rides her broomstick along the path (this time bent over to reveal a ‘full moon’ of her own if you catch my drift!) stopping at each house along the way, although a random pumpkin can push her along up to 10 places. Occasionally a door will be answered and she’ll either get some candy and continue, or get the door slammed in her face and the bonus round ends. Whatever multiplier number the game ends on will be multiplied by the spin stake for the bonus win. 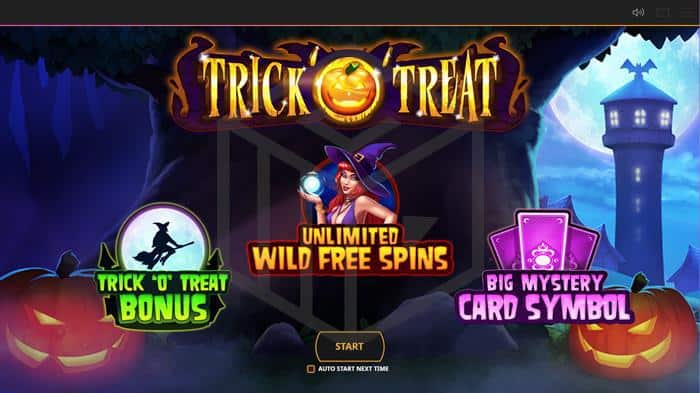 Land bonuses on 1 and 3 with a free spin symbol on reel 5 and you’re into the unlimited free spins round. The round starts by awarding an expanded wild on reel 5. On each spin, the wild will move down one row and spins will end once the final wild has disappeared from the board. This means you get a minimum of 3 spins, although its likely more wilds will land along the way. The previously mentioned candy symbols appear randomly during this round, falling down into the pumpkins at the bottom of the reels once landed. Each time one lands it represents 1x the spin stake in winnings. With plenty of expanded wilds and stacked symbols appearing in this feature it tends to be the most lucrative part of Trick ‘O’ Treat. At the end of the round, the candies are exchanged for cash and added to the wins accrued during the free spins. 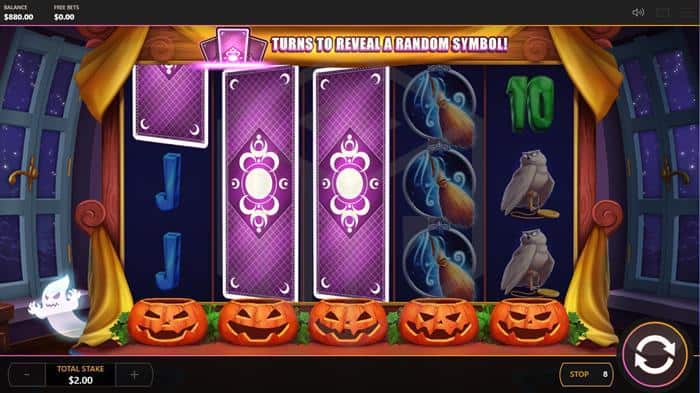 During the base game, the rows might get filled with huge reel covering cards. These cards have the same random symbol on them, and can fill up to three reels in one go!

Our Thoughts on Trick ‘O’ Treat

With a solid design, some eye-catching symbols, and a couple of fun features we were generally impressed with Trick ‘O’ Treat. We were a little surprised, however, to discover the RTP was only 94.4%, putting it very much near the bottom of the ROI tables. We must have had a good run as during our test runs we regularly entered the free spin round for some hefty pay-offs, but we’re guessing it must have just been beginner’s luck if the 94.4% RTP is accurate!