As soon as the game has loaded, there will be no doubt about what theme Tiki Mania has to offer, even though the title kind of already gives it away. You will be headed to a tropical island paradise, where the backdrop of the reel set is perfect turquoise water and white sand beach with palm trees and tropical flowers scattered around. The reel set is framed by bamboo canes, with the slot title placed at the top alongside what looks like a basket filled with gold.

This colourful slot ha A, K, Q and J as the four low paying symbols on the reels. You will also see coconut cocktails, ukuleles, flowers as well as bongos, these represent the high value symbols of the game. When getting 3, 4 or 5 symbols in combination on the reels, you will be awarded 30, 40 and 50x your stake.

The red Tiki symbol acts as the slots wild symbol and will only be appearing on the reels 2 and 4. When appearing stacked, one of these red Tiki symbols landing partially on the reels will result in it being nudged upwards or downwards to be able to fill the reel and reward you with an entirely wild reel. This wild symbol also has the ability to substitute for all other symbols except the free spin scatter and other wilds. A Polynesian princess acts as the scatter symbol.

This slot has quite a few features that make sure you will remain entertained during the game. You will find a re-spin feature, a jackpot feature, a free spins feature and of course the bonus symbols. 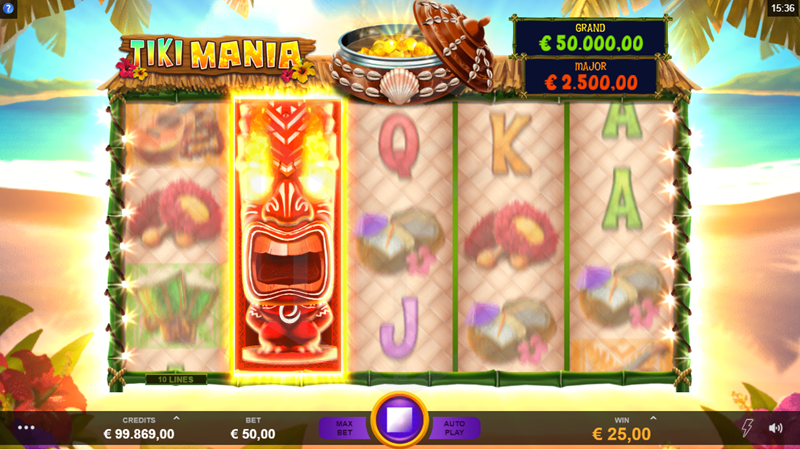 Should a red Tiki wild symbol land on the reels, it will result in a nudge as we described above. However, it will also trigger the re-spin feature of the game. When this happens, you will receive a free re-spin with the red Tiki wild reel being locked in place while the remaining reels re-spin. During this feature, multiplier wilds can land on reels 2 to 5. There you will see blue, green or yellow Tiki multiplier wilds who have multipliers set at 1x, 2x, and 3x.

Any multiplier wild symbol that partially lands on the reels will always be nudged up or down in order to occupy the entire reel. Should you get more than 1 multiplier wild, then the multipliers will be multiplied! These wilds will continue giving you more re-spins until no new wins are formed.

Our thoughts on Tiki Mania

Tiki Mania plays well and definitely has some good winning potential, however, this game is still far from being a favourite. The theme of the slot is certainly fun, but you should not be expecting any big wins too often. The re-spin feature is what gives you the best winning opportunities thanks to the multiplier wilds and locking wild reels.

All in all, this is a pretty good slot from Microgaming as it is designed well and offers several entertaining features such as the free spins, multipliers and re-spins. All of this, as well as the 2 jackpots on offer, makes Tiki Mania a pretty good choice, but as already mentioned, there are still better options out there.