Play The Wiz on

As with all Elk Studio games, the colours are bold and vivid and the artwork immaculate. The background shows a splendid medieval castle to the left of the game board with a lush green valley to the right with a lake and mountains in the distance with a full rainbow overhead. The game board sits centre screen with a golden frame and a multitude of symbols sitting atop translucent reels. A medieval ditty plays in the background to complete the fantasy theme.

The lowest value symbols are spoons, keys, brooches, and rings followed by the mid-value symbols, a magic potion and a golden crescent moon and finally the highest value symbols, a treasure chest and a golden sun. Five suns on a pay line award 10x the bet size. The wild symbol is of a fire-breathing red dragon which is randomly assigned a multiplier value of between 2x and 5x in both standard play and in the free spins round, and the scatter symbol is The Wiz himself. All of the regular symbols come stacked on all reels in both the base game and the free spins round.

Occurring in both the base game and the bonus game, the wilds in The Wiz not only come with a random multiplier of between 2x and 5x, but they can also combine to produce some mega-wins in both games. In the free spin round, they take on even more significance as the become walking wilds with respins. 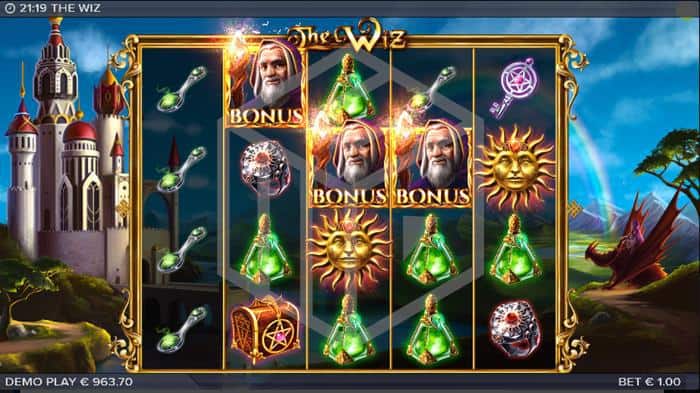 The Wiz free spins are known as Wizspins and are triggered by landing 2, 3, 4, or 5 Wiz symbols across the reels which award 1, 5, 7, or 10 Wizspins respectively. Furthermore, for every Wiz symbol you land during your spins you will be awarded one additional Wizspin. A nice touch before you start the Wizspins is that all the low-value symbols on the board are removed and replaced with higher value symbols. All instances of spoons are replaced with potions, keys with treasure chests, brooches with moons and rings with suns. Also, during Wizspins the wild dragon becomes a walking multiplier wild, walking leftwards one reel for every spin. All the while the dragon is walking all respins will not affect your remaining Wizspins.

Our Thoughts on The Wiz

While The Wiz may not be the most innovative game in the world, after all, there’s nothing new about multiplier or walking wilds, the way in which they work together make this a compelling and highly enjoyable, albeit fairly simple slot. Not that there is anything wrong with simplicity – in fact, the majority of the most successful slots are those which manage to do a couple of simple things well, and The Wiz certainly does that. Also, the bonus round comes around with a reasonable frequency and more often than not it delivers good, if not spectacular wins. Having said that during our test time we hit several very big wins. Nowhere near the 5000x bet size wins which are possible but certainly several hundred times the stake on numerous occasions. This is a fun way to spend an afternoon’s grinding – give it a go!