Sherwood Showdown by Greentube released on 03.12.2020 is a 5-reel & 3-row online slot with 20 paylines and a 95.13% RTP. This is a fairytale-themed game offering players a max win of up to 1500x their stake. Sherwood Showdown can be played on all devices from €0.2 to €100 per spin and is considered a medium volatility game. 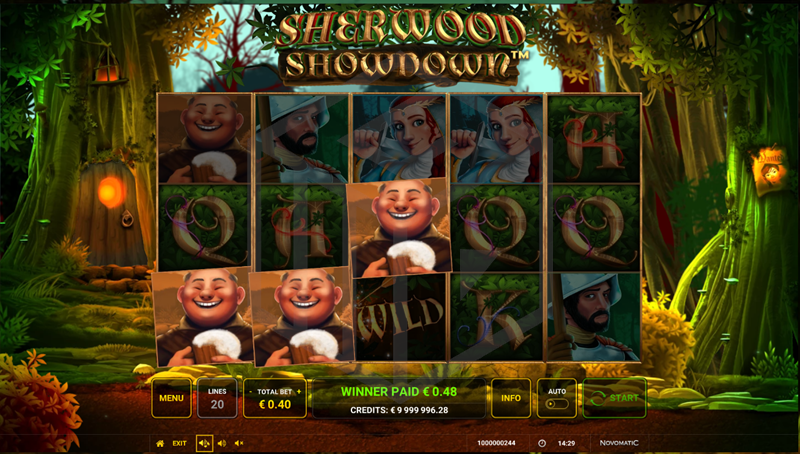 As I already mentioned, this Greentube slot game is beautifully designed with a lot of care and great details. The background behind the reels really sets the scene and tells the story of Robin Hood on his adventure. The background track is upbeat with a magical twist to keep your spirits high as you make your way through the forest on your adventure. 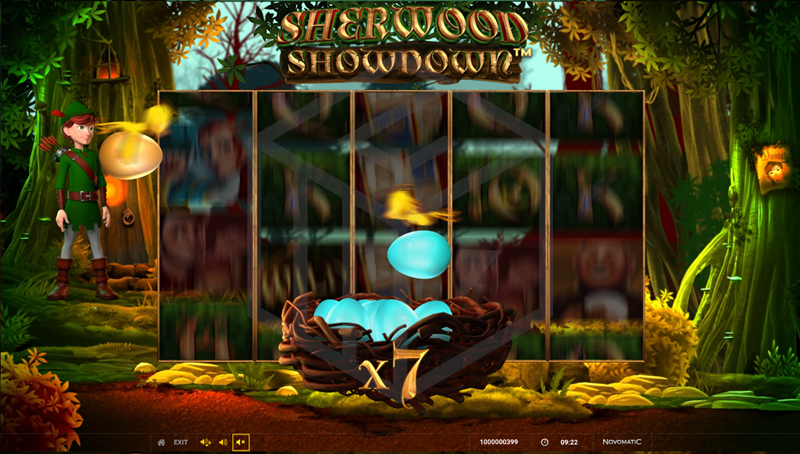 Sherwood Showdown is a slot which is packed with great bonuses and features for you to indulge in during your time exploring with Robin Hood.

There are six different modifiers in this game:

To activate the Fill the Nest modifier Robin Hood will appear shooting down birds nest from the trees. Once the nest has landed birds will drop multiplier eggs into the nest. If a Gold egg lands in the nest this will add a 3x multiplier. The bird’s eggs have the ability to add up to 20x multipliers into the nests.

At any point during the game, if you land a non-winning spin Robin Hood may make an appearance blowing his horn which will allow the reels to rotate so they land on a winning combination. This modifier has the ability to repeat at any time.

If you land a non-winning spin, then look out for a pack of wolves who may come racing across the reels. The wolves have the ability to make the reels respin to make them land on a winning combination. This can happen randomly at any point during the game.

While the reels are spinning Robin may make an appearance to the left of the reels shooting fire from his bow am arrow. If a symbol gets hit by Robin’s shot then that symbol will have the ability to multiply, adding more of the same symbol to the reels.

Reel Rise means that if a free spin Scatter symbol lands on reels 1 and 3, reel 5 then has the ability to extend up to four or five symbols. By reel 5 extending, this will enhance your chances of the number of free spins which can be won.

During this modifier, Robin Hood will appear holding a compass in his hand. The compass will determine the direction the reels will rotate. As long as winning combinations land on the reels, the reels will continue to rotate until no more winning spins land. Robin can appear at any time during the game with his compass.

The five different features consist of;

During the free spins for each Coin symbol that is added to the reels will retain its position until the round is over. During the free spins feature more Coins can appear on the reels during each spin, which will also lock into place. This continues until no new Coin symbols spin onto the reels. At the end of the round, your winnings will be multiplied by the total amount displayed by all the multipliers displayed on the Coins.

To wrap things up, I think Greentube did a fantastic job with this slot game. From the moment I opened the slot, I was impressed with the top quality and innovation that went into creating this online slot game.

The slot can take some grafting to land one of the great features, however, you will not be disappointed once you do. After all, what would an adventure with Robin Hood be without any hard grafting?!