The horse-racing themed slot plays on a 5x3 reel set (in the base game) with 20 fixed pay lines. It’s high volatility featured packed game which boasts a free spin/horse race feature with an extended game board.

You can play Scudamore’s Super Stakes from just €0.10 all the way up to €100 per spin at participating NetEnt casinos. 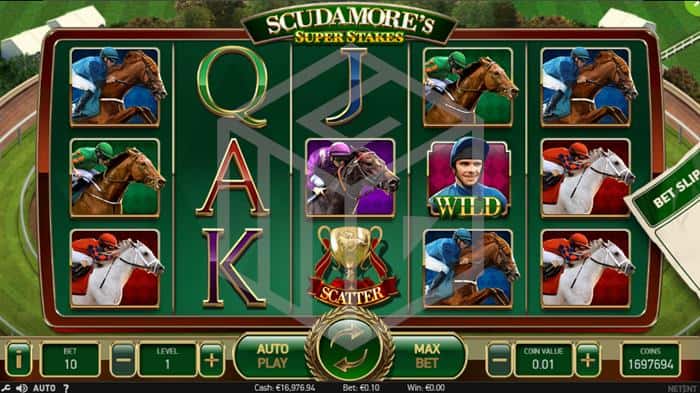 The design for Scudamore’s Super Stakes is relatively basic but certainly more than adequate. The oblong game board is framed in polished wood which makes it appear a little like an old TV screen. The symbols sit on green reels and behind the game board is an aerial view of a racecourse.  The betting slip poking out from the side of the screen to the right of the game board will be familiar with anyone who has been to a horse race. The background music is what you might expect to hear at the opening credits of a televised horse race. There are also some good animations in the game, especially the real-time horse race during the bonus round.

The low-value symbols are the standard J-A with four jockeys on horseback the higher value symbols. The red jockey is the highest paying regular symbol, awarding 25x the bet size for 5 across a pay line. The wild is Peter Scudamore himself who is worth 100x the bet size for 5 on a pay line. The scatter is a gold trophy (Peter’s Classic Cup) which only lands on reels 1, 3, and 5, and there is also a horseshoe random wild symbol.

Scudamore’s Super Stakes has a decent amount of features on offer. There is a random wilds feature in the base game, a betting slip side-game, and a horse-race free spins round. 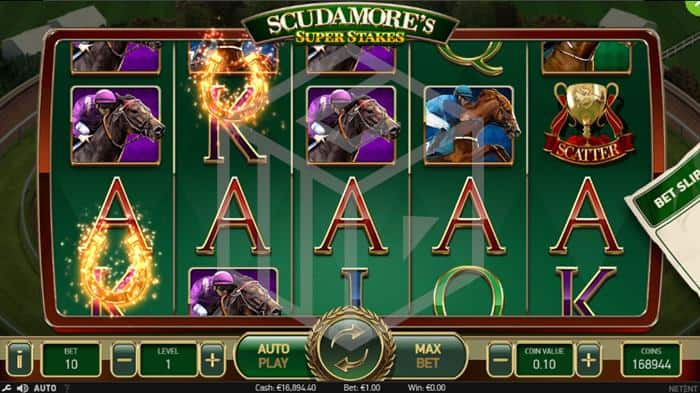 At any point during the base game between 2-5 golden horseshoes may appear on the reels. Once they have all come to rest they will transform into regular wilds, often leading to a nice win.

At any point during regular gameplay, you can click on the bet slip to the right of the screen to activate this feature. Bet on how many times a symbol will appear over a set amount of spins from the choices given. If you win you will be awarded whatever multiplier of you bet that particular bet offers. 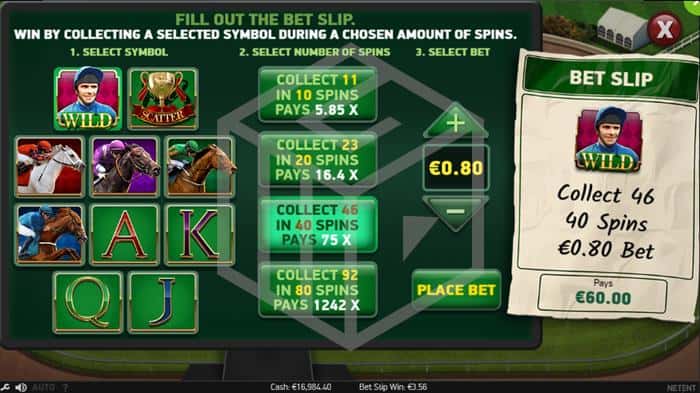 This is Scudamore’s Super Stakes bonus round and it is triggered by landing 3 scatters. Choose one of the four horses to win Peter’s Classic Cup which plays out along the bottom of the screen. All the horses are named after NetEnt games and each pays a different amount. For details see below.

Above the race, an adapted 5x4 game board with additional win lines plays free spins. Every symbol on the board represents one of the horses and for every win landed, the horse represented by the winning symbol will move forward. The first horse to move forward 4 times wins the race. 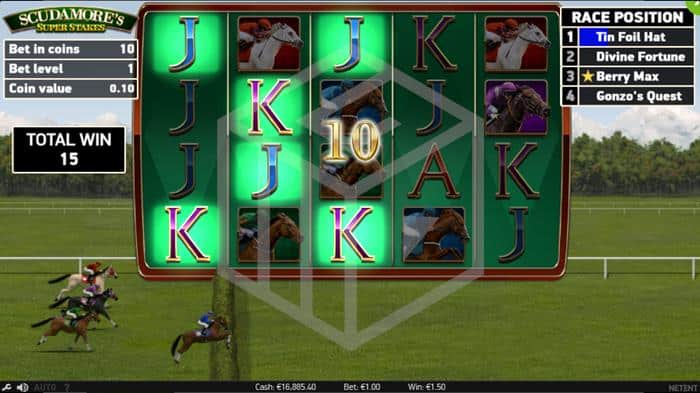 Our Thoughts on Scudamore’s Super Stakes

There’s a lot to like about Scudamore’s Super Stakes, for one it is going to attract the attention of racing fans, and that’s a fair old market. It also has some decent potential with a 5000x stake win possible in Peter’s Classic Cup, the game’s bonus round. The bonus round is also extremely immersive as not only are you watching wins accumulate during the free spins, but you’re also cheering on your horse in the race playing out below. For all those gamblers who like a flutter the Bet Slip feature is a nice touch, and there’s even a base game feature with the horseshoe wilds. One aspect we’re not sure about, however, is the way in which you bet during the bonus round. While we all know the chances of hitting the jackpot are low in any high variance game it’s always exciting to play a bonus round and think “what if?” However, when you’re faced with actively betting on that eventuality knowing that the odds are thousands to one, it becomes far less appealing. The wins during the actual free spins tend to be relatively low so it really is all about the race and to me, it just seems too big a gamble to go for broke each time. I can’t but feel this takes away from the excitement of a high variance bonus round a little. All in all, though, this is a good first outing into the sports slot market for NetEnt.