The Sakura Fortune slot is one of Quickspin’s most volatile slots, with an RTP of 96.56%. The characters, symbols, music and even design of this slot game are all quite reminiscent of the typical Japanese culture. In fact, the main character is princess Sakura herself, the princess of the flowering cherry tree, and everything else revolves around her.

Sakura Fortune is a five reel and 40 pay-line slot available on desktop, tablet, as well as most other mobile devices. The min and max bets players can play range from 0.20 to 200, depending on the currency played. The slot has an Asian theme, with a background that shows cherry trees while the princess Sakura is the main character of the game.

The symbols on the reels all related to the theme. The high-value symbols feature the emperor, the empress, the prince and two dragons. Typical old Japanese coins make up the low-value symbols. The scatter symbol is a hand fan. The wild symbols show Sakura herself and it can cover an entire reel. The wild can substitute for all other symbols including the scatter. All symbols, apart from the scatter, can appear stacked on the reels. 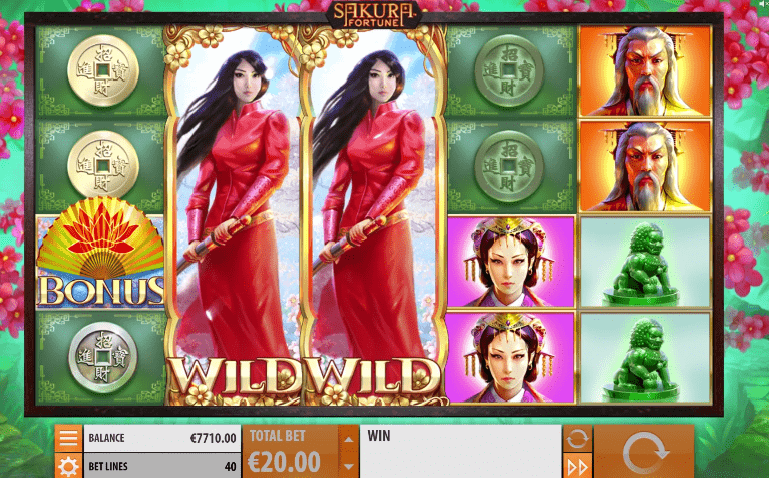 During the base game, if the player lands two or more wilds covering entire reels, the fortune re-spin will trigger. The player will get with two or more free spins, depending on the number of wilds that activated the feature. You can trigger the free spins feature by landing three scatter symbols from left to right, starting from reel one.

If we had to judge the Sakura Fortune slot with other high volatile games, we would definitely notice that this game is more on the medium to high variance, rather than the high volatile slot games. Having said that, the potential to win big does come into play with the right amount of free spins and luck in the bonus game. All in all, we did like the expanding wilds, as it did give us quite a number of decent wins. What we would have liked to see, was a bigger number of free spins, the more the wild is visible on your reel.