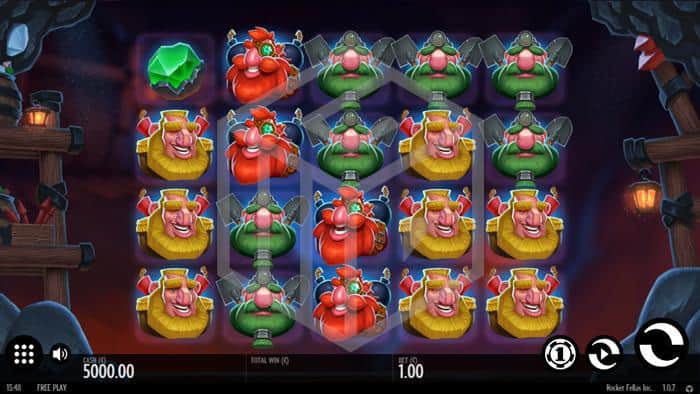 The design is of a cartoon diamond mine with wood scaffold and rocks either side of the game board. There is a warm glow in the mine shaft created by animated lamps glowing from the scaffolds and the occasional shaft of light beaming down from above. In the back ground a groovy disco beat plays while you spin the translucent reels centre-screen.

The low-value symbols are represented by blue, green, yellow and red gems while the higher value symbols are blue, green, yellow, and red haired dwarves. The highest paying symbol, however, is a barrel of explosives which is worth 30x bet size for 5 on a pay line. All regular symbols can appear stacked on the reels and as such the maximum winning spin in the base game stands at 900x the bet size. The Wild is a barrel full of gems and the scatter symbol is a fist with BONUS written across it. There is also a rocket which can appear from time to time as the first symbol of one or more rows.

The Rocket Feature is present in both the base game and bonus game while Sticky Wilds and Hot Reels only take place in the bonus round, which is a free spin round. 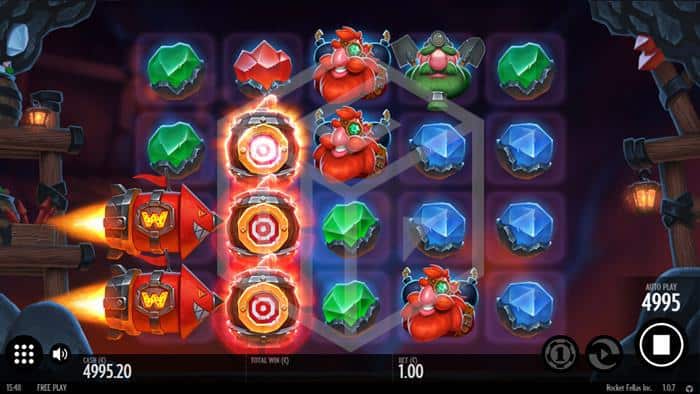 During any spin, either in the base game or the free spin round, Rockets may appear at the start of a row. They then blast across the row transforming the first symbol of whatever row it appeared on into a wild. Often more than one Rocket appears at once and it is very possible to land Rockets on all 4 rows at the same time. If the Rocket passes through a barrel on its way across the screen then it will transform it into a wild. The Rocket feature also has other benefits in the bonus game, which you’ll read more about below. 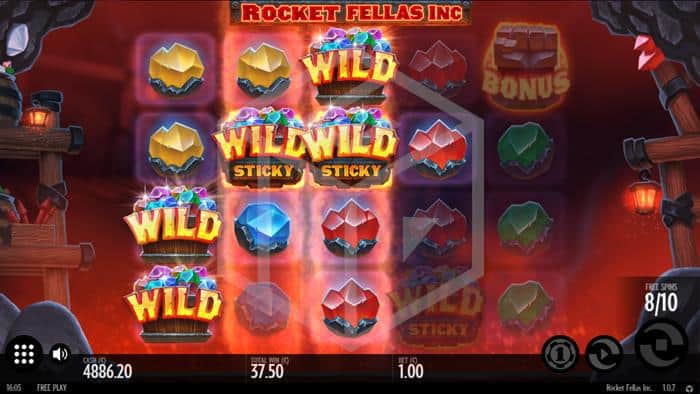 If, during free spins, the Rocket feature plays out and passes through a barrel then it will become a Sticky Wild and remain in place for the remainder of your free spins although note that the Wilds left by the Rocket on the first reel will not turn sticky, only those on rows 2-5. Hot Reels are also active during free spins which means that if any barrel lands on the same reel as a Sticky Wild then the reel will light up and the barrel (or barrels) with the transform into Wilds. It is possible, with all the wilds and additional spins available that you could land a maximum win of 7,325x the bet size.

Our Thoughts on Rocket Fellas Inc.

Rocket Fellas Inc. is arguably the best of the Dwarf Mining slots I’ve come across. It has almost the perfect combination of features which work together to create an action-packed bonus round. As it is a volatile game you must be prepared to grind through a lot of dead or very low winning spins, but when you get to the free spins a whole world of possibilities open up, and a maximum win of over 7,000 the stake is not to be sniffed at. The graphics are atmospheric and pleasing on the eye, while the soundtrack is a disco-tastic winner! What’s not to love?