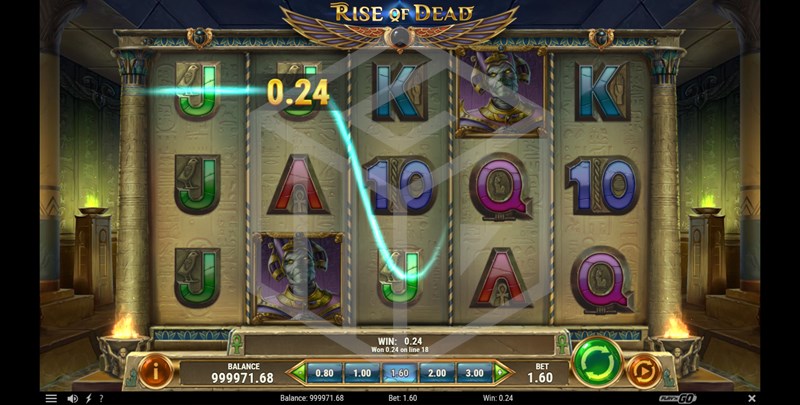 As mentioned already this is without a doubt a much darker take on the slot «Book of Dead», giving it almost an apocalyptic feel to it. Using cold colours and overall dark design, the mood has definitely been set. Hieroglyphs such as the ancient Egyptian Ankh have been placed on both sides of the information bar, symbols that stand for eternal life.

The symbols on the slots five reels include the classic card values ranging from A to 10. There is also 3 premium walking dead pharaohs acting as another three symbols. The symbol of highest value is Tutankhamun who is the ruler of the New Kingdom and pharaoh of the 18th dynasty. Should five Tutankhamun symbols appear across one pay line, this will result in a payout 25x your stake.

The wild symbol that shows the scarab beetle, also well known from other Egyptian themed slots, performs its usual duties. It will be able to replace all symbols apart from the scatter. This is also the highest paying symbol that is worth 125 times your stake should five of them appear on a pay line. 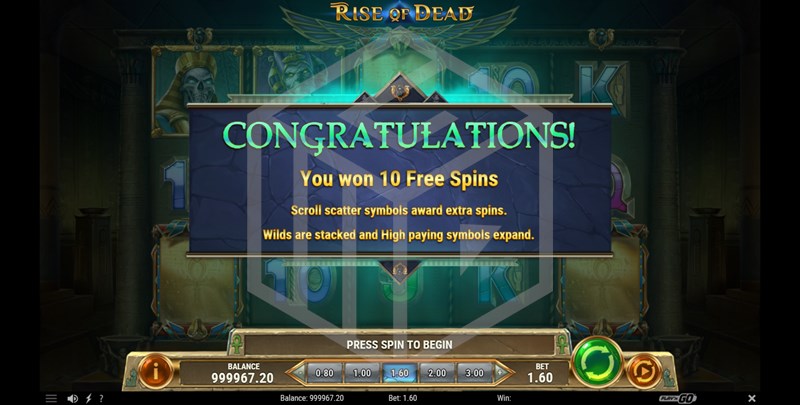 Most likely you will be spending plenty of time chasing the bonus, but fear not, there are more than enough of various entertaining features during the main game. You will in other words never have any boring moments while playing this game.

Rise of Dead has the Mega Stacks feature as one of their three available features throughout the game. This will be activated automatically on each and every spin during the main game. One symbol will be chosen to fill all five reels with stacks that will be 12 symbols high. This feature will, of course, improve your chances of getting some great winnings combinations thanks to the chosen symbol.

This is the second of the three main features. Gift of Gods will be randomly triggered and when this is activated, reels 1, 3 and 5 will be fully stacked with the same symbol. They will then be held in their place while the remaining reels 2 and 4 will continue spinning with the standard symbols in place. This could result in a win up to 500x your stake if you are lucky enough to have a full screen of the symbol with the highest value.

The third and final special feature is most definitely the one you should hope for when playing Rise of Dead. It is this feature that can give you the mega wins. If you wish to get admittance to the tomb of the dead kings, then 3 scatter symbols must appear on reels 1, 3 and 5. You will start off with 10 free spins, after that 1, 2 or 3 scatters that land on the reels during this feature will be able to add 2, 4 or up to 10 extra free spins.

What makes this feature so good is that there is no limit to how many times this bonus can be re-triggered. This free spins feature is all about the Mega Stacks while adding on some extra benefits. Regular symbols will appear stacked on the reels, but so will the wild symbol. Even more, the pharaoh symbols that land on a winning pay line will expand to cover the reels. Should you get a full screen of wilds, you will receive a total of 2500x your stake, but if you are lucky this could go up to 5000x your stake.

Big Wins on Rise of Dead

CasinoGrounds have yet to receive a big win clip from any casino streamer winning big on the Rise of Dead slot by Play'n GO. If you have a clip of you winning on it, we're interested. Please contact us if you have won playing this game and have a recording of it.

Our Thoughts on the Rise of Dead Slot 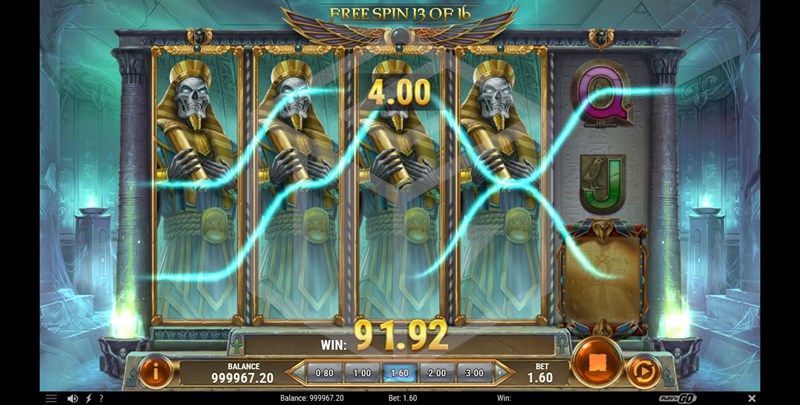 At first glance, we were rather excited to see this new take on Egyptian-themed slots, but we soon realized that the Rise of Dead slot is simply a clone of a slot previously released by Play'n GO. The game developer has surely made a great effort in creating something new and entertaining, but somehow they still managed to miss the mark.

Rise of Dead isn't a bad game, but there are just too many references to other releases such as Book of Dead. However, the slot most definitely has some positive sides to it, which comes from the three entertaining bonus features. Having the Mega Stacks that always is activated as well as the Ancient Free Spins which can give you payouts of up to 5000x your stake, certainly makes the game worthwhile.