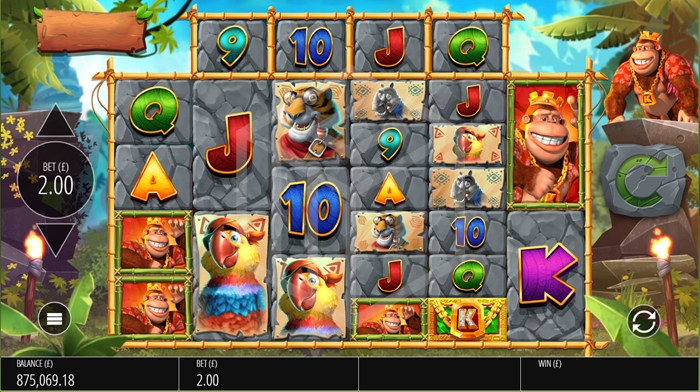 For their 13th slot using the patented Megaways™ mechanic, Blueprint Gaming have opted to bring back the King Kong character from their successful 2016 slot, King Kong Cash.

Featuring all the same cartoon jungle animals and scenery as the original game, Blueprint is confident that their Return of Kong Megaways slot won’t be ‘unlucky 13’ for them. In fact, there are high hopes that the Donkey Kong inspired slot will pay dividends.

With a familiar 6 reel Megaways™ set-up, each reel contains between 2-7 symbols on every spin. Adjacent identical symbols pay according to the paytable. Land 7 symbols on each reel and you’ll be playing with the maximum 117,649 ways to win.

The slot features cascading win streaks, mystery symbols, and a lucrative free-spinning bonus round with increasing win multipliers. There are also a couple of innovations in the bonus round which can keep the wins rolling in, but we’ll come to those in good time.

The design isn’t identical, however, as in this incarnation, rather than lazing his throne on the ground, Kong is perched high up on a rock watching the action gleefully unfold. He’s also acquired some serious bling in the shape of a huge gold “K” pendant.

The game board is framed in bamboo with the symbols sitting on blocks of stone. As per many a Megaways™ slot, there is one horizontal reel with four symbols above reels 2-5. This sideways spinning reel is the only one on which wild symbols appear.

There is also a mystery symbol in the form of a golden barrel and then scatters to spell out “KONG” in golden pendants. Finally, there is a Golden Monkey symbol which only appears during the bonus round.

Return of Kong Megaways™ benefits from the popular cascading reels features with win streaks. Also, mystery symbols often enable decent wins in both the base and bonus game. The main feature is a free spins round with increasing win multipliers.

After a win lands, the symbols making up the win disappear. Symbols above those which have been removed drop down to fill the gaps, with their place being taken by new symbols appearing from above.

Any new win created by this process allows the cycle to repeat. This continues until no new win is created at which point a new spin will begin. The cascading reels feature is also in play throughout the bonus round.

The mystery symbol feature can be triggered after any losing spin. Kong will hurl a golden barrel at the game board which will add anywhere up to 100 barrels to the spinning reels. When the reels stop, any visible barrels will transform into identical paying symbols.

Get lucky and this feature can really pay off.

12 free spins are awarded for landing 4 scatter symbols on the regular 6 reels (not the horizontal reel). For each additional scatter which may have landed during the triggering spin, a further 5 spins are awarded. These spins come with their own set of features.

Increasing Multiplier: During the bonus round, every win landed will add a win multiplier. The multiplier figure will not reset after a losing free spin.

A popular slot character combined with the magic Megaways™ formula ought to be another smash hit for Blueprint here. The enormous potential of a possible 50,000x win won’t hurt either.

While there isn’t an awful lot new going on in Return of Kong which we haven’t seen in numerous other Megaways™ slots, the presentation is exceptional.

Also, Blueprint has managed to make room for another innovation with the Golden Monkeys feature during free spins. The way the mystery symbol is presented also marks a deviation from the usual route.

There’s not much more to say other than it would likely take an army of real-life King Kong's storming Blueprint HQ to stop this becoming another smash hit!