Anyone familiar with the Rainbow Riches series will know what to expect visually; set in a lush meadow with the cheeky, green attired Leprechaun playing a part in proceedings. In Home Sweet Home there are four wooden gates housed within bushes behind the game board which form part of the Knock-Knock feature. There are also a fair few familiar Rainbow Riches symbols used within the base game and a recognisable Irish ditty accompanies game-play. The low-value symbols are J, Q, K, and A, followed by the harp and the horseshoe, the violin, the cross, the mushroom, and the highest value regular symbol, the Rainbow Riches logo which pays 5x the bet size for 5 across a pay line. The scatter symbol is the Leprechaun himself who only appears on reels 1, 3, and 5. On reel 1 the Leprechaun appears 3 symbols high and all Leprechaun symbols also count as wilds.

Rainbow Riches Home Sweet Home benefits from the Knock-Knock bonus in the base game and also a free spin round. Furthermore, as with other Barcrest games, you have the opportunity to pay 10x, 15x, or 25x a set stake size for 5 free spins with an increased chance of winning. This is known as the ‘Big Bet’ feature.

If you fully land the Leprechaun symbol on reel 1 then you will trigger the Knock-Knock round whereby the Leprechaun idly leaning against a tree above the game board will open between 1 and 4 of the wooden doors nestled in the bushes, with each open door revealing a symbol from the main game. These symbols will then become wild on the game board below which can produce some big wins. If you’re lucky, one of the open doors will reveal a fairy who will zap between 2-5 random symbols wild. 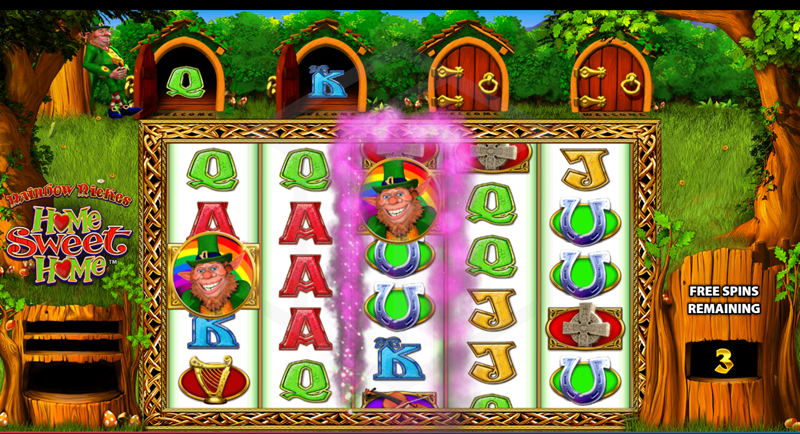 To earn free spins you must land, fully visible, Leprechauns on reels 1, 3, and 5. Do this and you’ll receive 8 free spins. As you will already have triggered the Knock-Knock bonus by landing a full Leprechaun on reel 1, the wilds which have been earned from the Knock-Knock feature will remain in place for all 8 spins. Free spins can be retriggered once for a combined total of 16 possible free spins, all with wilds held in place throughout.

Being a fan of the Rainbow Riches games I was looking forward to another take on the franchise and I was fairly happy with what Rainbow Riches Home Sweet Home had to offer. The Knock-Knock feature appeared fairly regularly, and while it can leave you with nothing, it also has great potential to create some memorable wins. The free spins are where you really start earning coin, however. Although very tricky to land, if you manage to open a few gates during the preceding Knock-Knock round then you can end up with spin after a spin of big, big wins. There are some drawbacks though. If you’re a low-stakes grinder then this might be one to avoid because play for anything less than €2 a spin and you’re only getting a relatively paltry 94% RTP which seems a little unfair considering if you play for €2 or above that figure shoots up to 96%. The highest RTP of 97.75%, however, goes to the Big Bet option but whether you want to risk that amount of money for 5 slightly advantageous €2 a go spin is another matter. Having played all 3 Big Bet options multiple times, very rarely did I actually make my money back let alone make a profit. I’m not disputing the RTP, but it would appear that the volatility increases considerably in the Big Bet Rounds so if you are a Big Bet junkie then be prepared to shell out some cash before hitting pay dirt. Personally, I felt more comfortable at the €2 level where I got a decent 96% RTP with slightly less volatility and still hit the Knock-Knock bonus with some regularity.