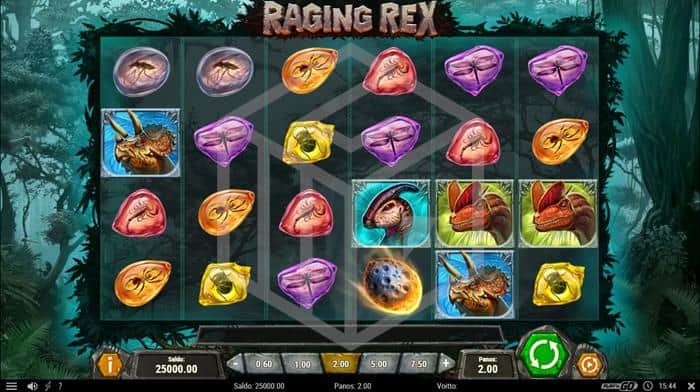 Raging Rex, it has to be said, has a fairly mediocre design. It’s by no means terrible and the background scene is pretty well drawn and atmospheric enough, but the quality of the artwork on the symbols let it down a little. That said, the game itself is a banger and if Play ‘n Go want to allocate more of their resources to making a decent, playable game with a good mechanic than on the design work then that’s ok by us.

The game board takes up most of the screen with its translucent grey reels revealing the dense, eerie rainforest-type affair associated with any Jurassic Park inspired setting. The controls housed beneath the gameboard appear framed in rock, kind of like the bowling scoreboard in The Flintstones.

As to the symbols the low values are taken up by tiny insects and creatures preserved in different coloured pieces of amber (which, needless to say, are not all coloured amber!) namely blue, orange, yellow, red, purple, and green. The higher value symbols are all dinosaurs starting with the Parasaurolophus followed by Triceratops, Dilophosaurus, and Velociraptor. The wild is the “Raging” T-Rex himself, and the scatter symbol is a flaming meteorite. The highest paying symbols are the Velociraptor and the T-Rex wild which both pay 7.5x bet size for 6 across the reels and as is the way with a ‘many ways to pay’ slot, all symbols can appear stacked on the reels. 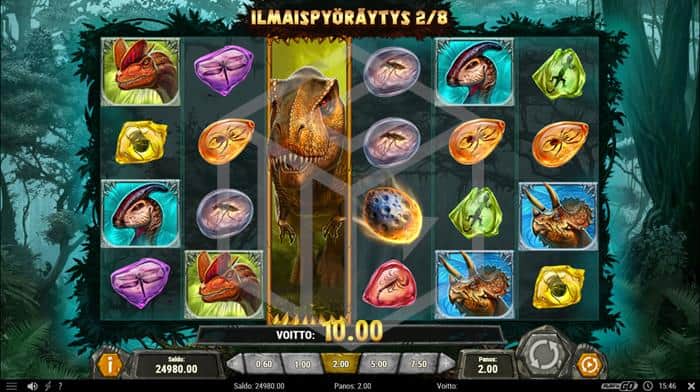 The base game feature “Rampage” occurs if you land a fully stacked T-Rex wild reel (available on reels 2-6) whereupon the giant dinosaur will give a big, animated roar and you will be awarded up to 5 respins depending on where the wild reel occurred. With each respin the stacked wild will move one reel to the left, with the final respin taking place when the T-Rex reaches the leftmost reel. Land the full reel T-Rex on reel 6 and you’ll receive 5 respins whereas land him on reel 2 and you’ll just get the one.

Land 3, 4, 5, or 6 meteor scatters and you’ll receive 8, 15, 20, or 30 free spins. During the course of the spins unlimited additional wilds can be won if you land 2 or more scatters in any one spin (5, 8, 15, or 20 extra free spins are awarded for landing 2, 3, 4, or 5+ scatters during the bonus round). Furthermore, prior to the onset of the spins you get to choose which special feature you’ll like added to the free spin round; 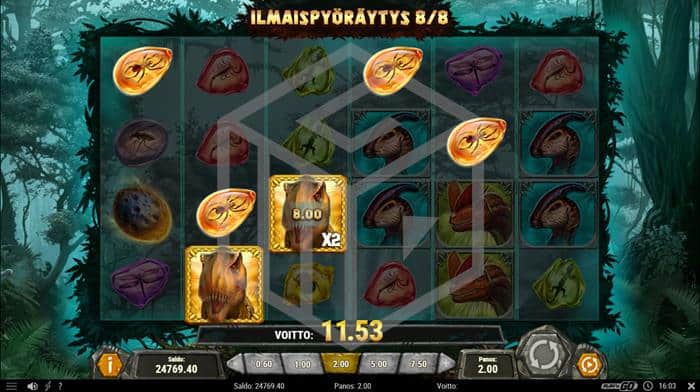 Our Thoughts on Raging Rex

This is a great start to the year for Play ‘n Go. Raging Rex is such a playable game with great features in both the base game and within the bonus round. For a relatively high variance game the features aren’t the hardest to trigger, and while they may not pay megabucks each time out the wins you get from all the features tend not to disappoint. As with most Play ‘n Go games the maximum potential win is 5000x the bet size, and while you’re unlikely to hit that, Raging Rex certainly has the potential to deliver with those big wilds and multiplier free spins. A very enjoyable and playable game from Play ‘n Go here which is hopefully indicative of things to come in 2019.