This game is the second video slot release (following last October’s Lilth’s Inferno) from Yggdrasil’s strategic partnership with Hong Kong-based AvatarUX studios. The partnership is part of the Yggdrasil Game Server (YGS) Masters programme which launched back in 2018. PopRocks is the first in a series of PopWins games AvatarUX and Yggdrasil are working on. 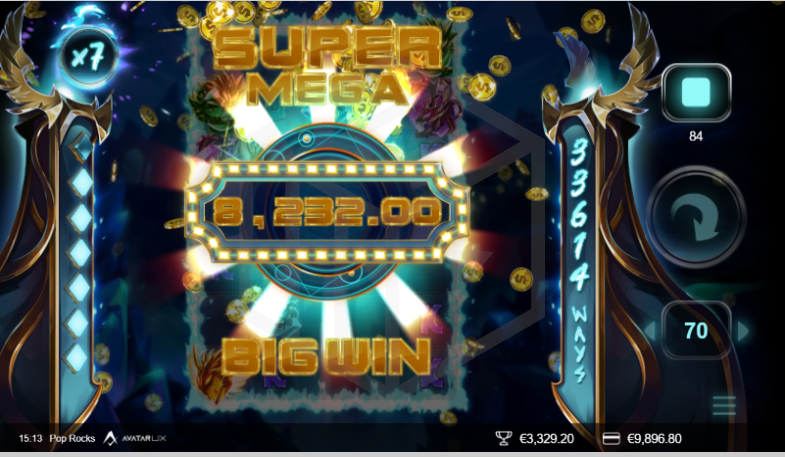 There are no triggered special features as such as the PopWins mechanic is constantly in play. Any winning combination of three or more identical symbols starting at the left or rightmost reels triggers a PopWin. All winning symbols ‘pop’ to be replaced by two new symbols on the same vertical reel. The reels expand until they reach the maximum height of 7 symbols. Once a reel reaches 7 symbols in height a popped symbol is only replaced with one new symbol. When the maximum size board is reached a random wild symbol is placed on the board.

The action appears to take place at the entrance to a huge and imposing castle set high above what is presumably the source of the aforementioned mystical gems. Set at night, the dimly lit and imposing towers of the castle provide a suitably mysterious and somewhat spooky cartoon scene. The 5x3 reel set is set between the gateposts of the castle’s entrance and consists of transparent floating tiles. Rather than spin, the symbols land from left to right, rather like data appearing on a computer screen. The soundtrack is fast-paced and somewhat reminiscent of the incidental music from Mission Impossible.

Our Thoughts on PopRocks

PopRocks is a fun addition to the expanding reels genre. It’s a little like playing a Megaways slot with cascading reels, although during PopRocks each consecutive win is guaranteed to increase the ways-to-win until the max height is reached. It if often a long slog to get to the upper echelons but when you do the payouts can be fantastic. As the board increases in size, both the number of wins and the win multipliers increase exponentially. With wins of over 70,000x the bet size potential, I can see this attracting a fair amount of attention. Whether or not the nature of the game will keep the punters coming back for more remains to be seen. However, it does combine elements of some of the most successful games on the market, so it stands a decent chance.

It’ll be interesting to see how AvatarUX and Yggdrasil use this new mechanic throughout the rest of the PopWin series.