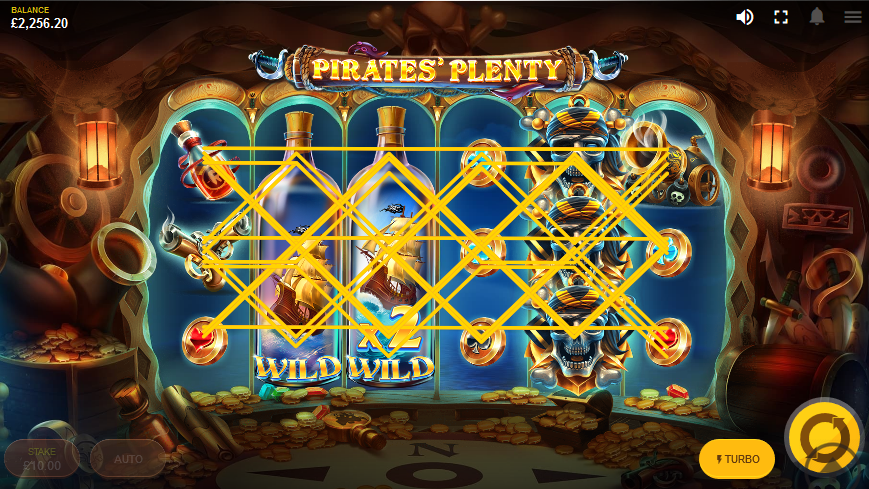 Red Tiger has done a magnificent job with the visuals on this here video slot. The action takes place in the Captain’s room of a sunken ship at the bottom of the sea. The room is warmly lit with gas lamps hanging from octopus tentacle styled rafters. The room contains plenty of nautical hardware including cannons, cutlasses, an anchor, treasure maps, the Captain’s hook hand, and of course plenty of golden coins and treasure.

The reels appear as a big window looking out into the depths of the ocean. Golden coins with the four playing card suits represent the four lowest value symbols. The five high paying symbols appear as bottles of grog, pirate’s pistols, cannons, pirate’s hats and skull and crossbones.

The skull is the highest paying, rewarding 50x the stake for 6 across a pay line. The reels also contain map symbols which help to unlock the treasure reel (6th reel). The wild is a monkey, the scatter is an “Ocean Spins” symbol, and the ghost pirate appears as a symbol during the bonus round. 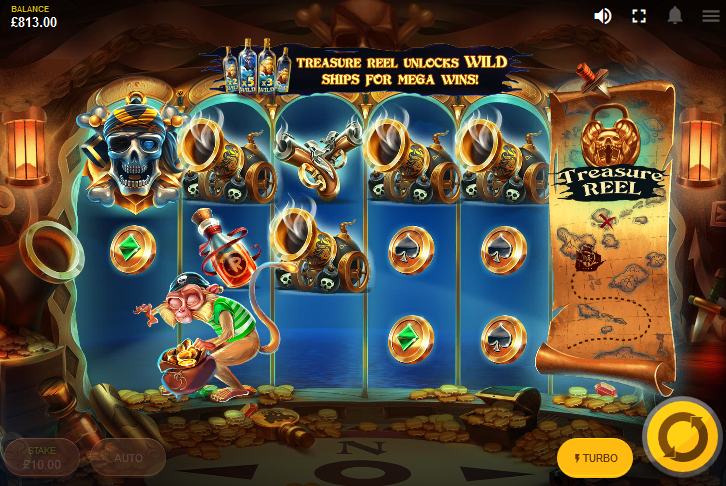 Pirate’s Plenty has a decent amount going on besides just the spinning reels. The Wild Monkey can create some big wins in the base game, the treasure maps help to reveal the Treasure Reel and Wild Ships, and the scatters unleash a superb free spins round.

Upon appearing, the Wild Monkey hops around the board removing all of the low-value symbols. They are then replaced with high-value symbols for a guaranteed win.

To the right of the gameboard's a treasure map. Each time a map symbol lands the ship sails closer to the top of the map. When enough map symbols have been collected the Treasure Reel will be unlocked, adding the 6th reel to the gameboard.

The 6th reel will remain in play for the remainder of the playing session as long as the stakes aren’t changed.

Full-length Wild Ships appear on the reels while the Treasure Reel is active. They are full reel wilds in the guise of a ship in a bottle. They each come with a multiplier of between 1x and 5x, therefore, increasing the maximum win considerably.

Three scatter symbols award 10 free spins (known as Ocean Spins in this game). These can be played on a 5x3 or 6x3 reel set depending on whether or not you have activated the Treasure Reel.

The ghost pirate is the most important symbol during this free-spinning feature as every appearance he makes will award one key. Above the reel set during these spins, three treasure chests are visible.

Each chest requires three keys to being unlocked. Land enough ghost pirates to unlock the chests. Each unlocked chest will award extra spins as well as turning one of the lower value symbols wild for the remainder of the free game rounds...

We have nothing bad to say about Pirate’s Plenty, it’s got pretty much everything. The design is first class, the features are hard-won and nearly always worth the wait, and with a maximum payout per spin of 5,000x the stake, there is “Pirate’s Plenty” of potential here.

Playing towards the additional reel is a nice touch as you feel invested in the game and the prize of that extra reel is a fun quest in itself. Very clever stuff from Red Tiger.

And that extra reel can pay dividends in the Ocean Spins round. In our short stint trialling the game, we were able to bag a win of over 1,000x the stake this way – and it was a lot of fun. Great stuff, and highly recommended.