Within a few days of the release of this slot, a CasinoGrounds Community member won 45000x his stake playing it (the must drop jackpot).

Although the design is instantly recognisable from the original, Pirates’ Plenty: Battle for Gold have some subtle differences as well as improvements. Once again the action takes place in the Captain’s quarters only this time the ship is very much above the water rather than underneath it! There’s no ghostly ship’s commander here as Captain Blackbeard is alive, well and hell-bent on some serious piracy. The quarters are situated at the ship’s bow with a large window looking out to sea acting as the gameboard. Inside, the quarters are festooned with gold coins, swords and cutlasses, cannons, treasure chests, and a couple of hanging lanterns.

Across the top of the gameboard, beneath the game’s logo is a long treasure map where ‘X’ marks the spot. Behind the floating symbols lies a glorious view of the ocean shimmering beneath a beautifully colourful early evening sky. At the bottom of the gameboard, you can see the business ends of five hefty canons, ready for action. An urgent, excitable soundtrack accompanies the play.

Low-value symbols are the four card suits emblazoned on gleaming gold coins. High-value symbols include bottles of grog, duelling pistols, smoking cannons, pirate hats. The highest value symbol is a skull and crossbones which awards 30x the bet size for 5 on a pay line. There is also a ‘Battle Spins’ scatter and a Wild Monkey. There are also regular wild symbols with win multipliers, although they only appear in the bonus game. Finally, there are map symbols which come help you unlock an additional row of symbols (but more of this later).

The base game benefits from a roving Wild Monkey feature and is also where you’ll be able to earn access to an additional row of symbols by reaching Wild Island Row. There is also a highly lucrative free spins (Battle Spins) feature with sticky wilds and win multipliers. 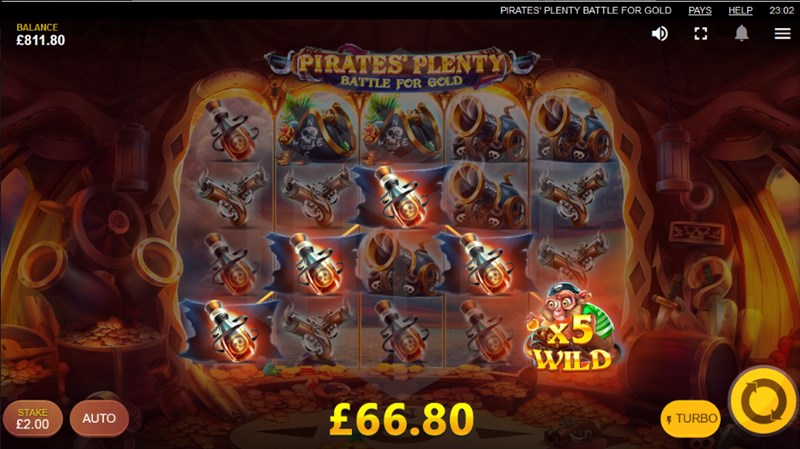 As in the first Pirates’ Plenty slot when the Wild Monkey lands on the reels he scuttles around the board removing all low-value symbols which are then replaced with her value symbols. Wherever the Wild Monkey ends up after removing symbols he will remain in place and act as a wild while the rest of the board respins. There is one significant improvement to the original Wild Monkey in this slot, however. As the monkey removes more and more symbols he will gradually accrue win multipliers which significantly improves any wins in which he might feature. 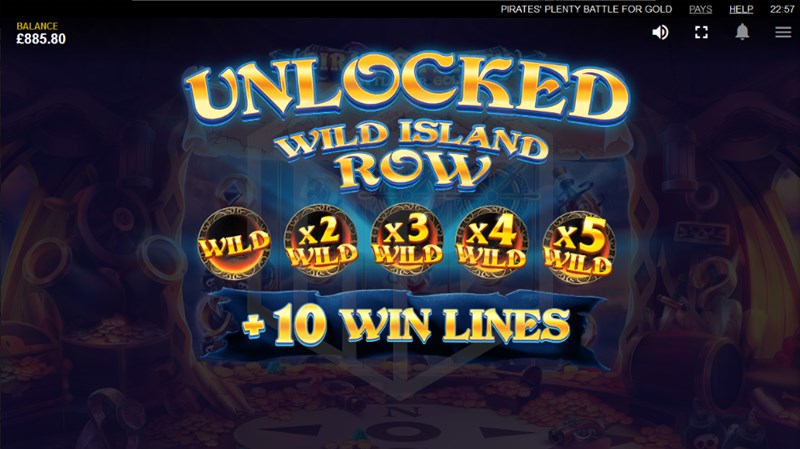 Another feature brought over from the previous slot, Wild Island Row charts the progress of a ship crossing the ocean. Every time a map symbol lands, the ship on the map above the gameboard moves closer to the ‘X’. Fifty symbols unlock Wild Island Row, adding a row to the gameboard and increasing the number of pay lines from 20-30. The additional row will remain all the time the stake remains the same, even in the bonus game. Furthermore, the unlocked Wild Island Row introduces wild symbols to the reels which may appear with or without multipliers up to 5x. 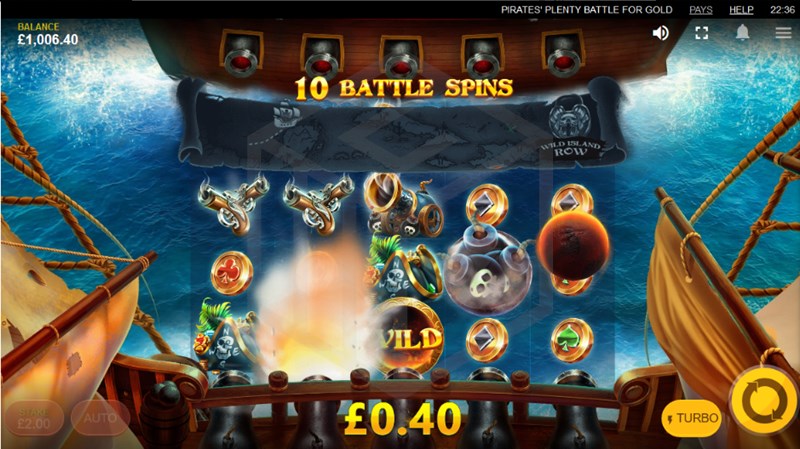 Three scatters activate the bonus game, awarding a random number of Battle Spins (averagely around 10 in my experience). The scene shifts from the Captain’s quarters to the ship’s deck directly above where you’re faced with a rival Galleon head-on. The gameboard occupies the sea space between the two ships. During Battle Spins a new symbol is active – a ‘FIRE!’ symbol of three canons. Upon landing, the fire symbol launches a bomb which either adds another battle spin or results in a sticky wild. Often two or even three bombs are launched at a time. If a bomb lands on a sticky wild a win multiplier is added up to a maximum of 5x. Occasionally Captain Blackbeard will show up, throwing sticky wild bombs onto the reels. 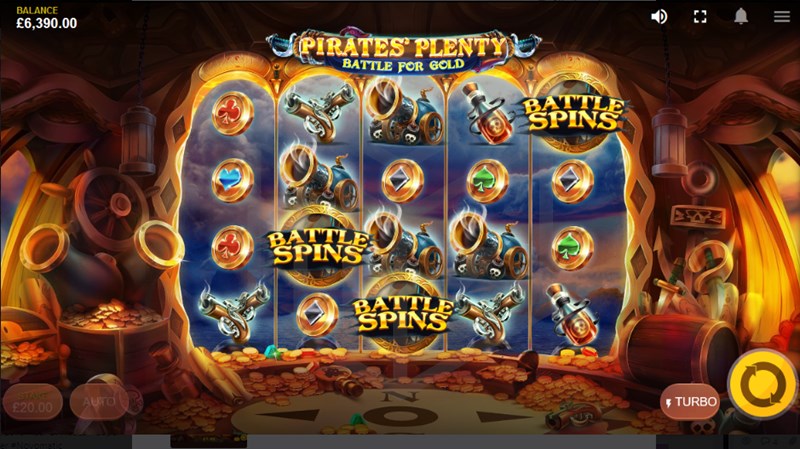 Pirates’ Plenty: Battle for Gold is a great slot machine from Red Tiger. Although I was initially concerned at the obvious similarities to the original, the improvements and additions made here make this a very worthy sequel rather than a lacklustre imitation.

The first thing to note is the matchless design, artwork, and animations. The attention to detail is nothing short of phenomenal. Just little things such as the ship gently bobbing up and down during gameplay or coins randomly falling down the reels as they spin really add to the experience – as does the stunning vista on display from beyond the gameboard.

Adding multipliers to the Wild Monkey is also a lovely touch and often leads to some sizeable wins. In my opinion, this adds significant value to it as a feature. The free spins round is entirely different from the original game, and it’s a corker. Who doesn’t love a free spins round with sticky multiplier wilds? Furthermore, the opportunity to pick up extra spins throughout the bonus round makes this an outstanding feature. Some might argue that a maximum win of 5,500x is a little on the low side for a high variance slot these days. I would counter that the chances of even making a 5,500x win are so incredibly unlikely on any slot that it ought not to be a genuine concern. Also, it just means that additional potential is available elsewhere in the game.

This slot improves on the original in almost every way, not an easy feat considering the bar was already set pretty high. Nice work Red Tiger!