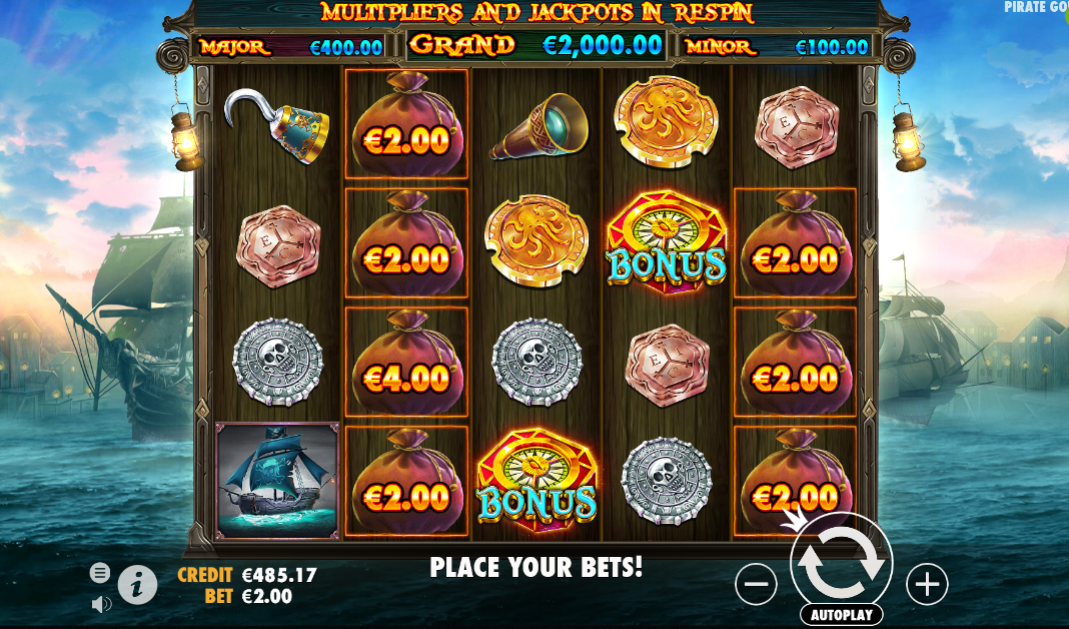 Pragmatic have really delivered on the design front with Pirate Gold, with some stunningly realistic animations on display throughout. The backdrop to the main game is a stunning animation of galleons moored at the docks during the calm of day. The sea is calm and a few clouds pass by overhead in what is otherwise a clear blue sky. This all changes during the free spins round as the calm of day is replaced by a seriously stormy night with galleons ablaze and waves crashing all around. This is some seriously impressive animation!

The gameboard is fashioned out of wood with a swaying lantern hanging from both top corners. Above the board are three panels showing the three jackpots; Minor, Major, and Grand which pay 50x, 200x and 1000x the bet size.

The low value symbols are represented by three coins (bronze, silver, and gold) and a pirates hook. The medium value symbols are a telescope, a scroll, a galleon, and a parrot. The highest value symbols are the female and male pirates, both of whom pay 12.5x the bet size for 5 on a payline. The wild is a treasure chest, and the scatter symbol is a sundial. There are also moneybag symbols which come into play during the Lucky Treasure Bag Feature 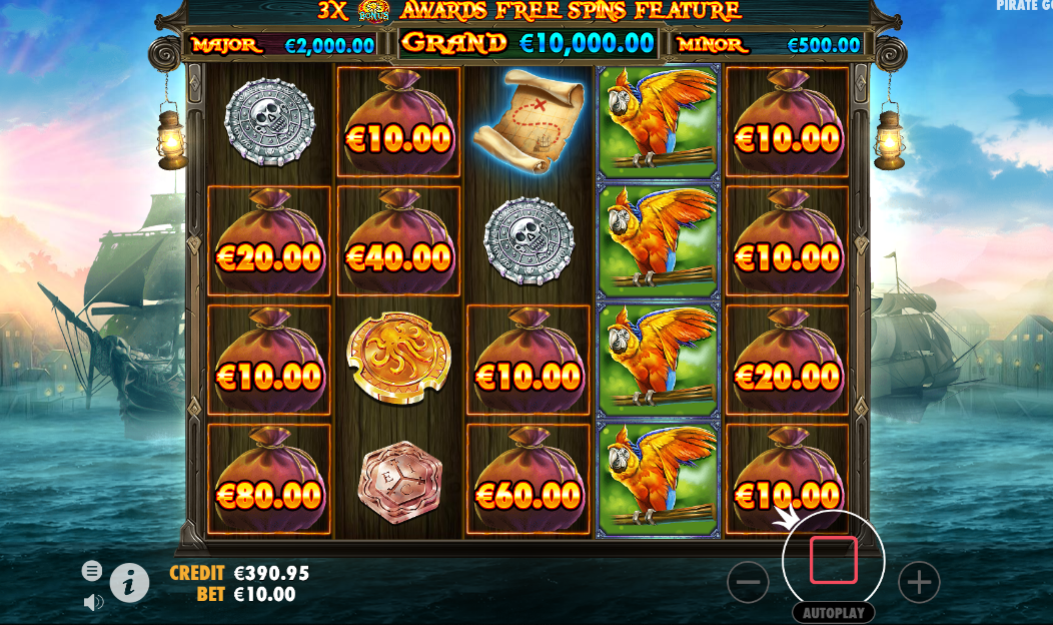 Trigger the Lucky Treasure Bag Feature by landing a minimum of 8 moneybags which remain on the screen as the other symbols are cleared away. You are then awarded 3 re-spins with all moneybags already on the reels remaining in place throughout. The only symbols which will appear on the spinning reels during re-spins are moneybags, the re-trigger symbol (a treasure chest with a skull latch), or a multiplier moneybag.

Moneybags either contain a cash value, the minor jackpot, the major jackpot. The multiplier moneybag will contain a multiplier up to 5x. Moneybags which land during the re-spins remain in place for the rest of the round.  Furthermore the re-spins will be reset to 3. Landing the re-trigger symbol will result in a full feature re-trigger once the original bonus round is completed. The Grand Jackpot (1000x the stake) is awarded when all symbol spaces are filled.

At the end of the round all moneybag values are added together and awarded as a single cash value. If a multiplier landed during the round it will be applied to the entire win.

Land 3 scatters on reels 3, 4, and 5 to trigger 10 free spins. Landing 3 scatters during the free spin round awards a full re-trigger, and there is no limit on the number of re-triggers. During free spins male and female pirates are transformed into wilds on reels 2-5, making wins far more plentiful.

Our Thoughts on Pirate Gold

Pirate Gold is a fantastic slot on all counts; It has awesome potential, it is visually stunning, it has features which can really deliver, and it is very, very playable.  This is a real winner from Pragmatic Play which should appeal to any serious slotsmith out there.