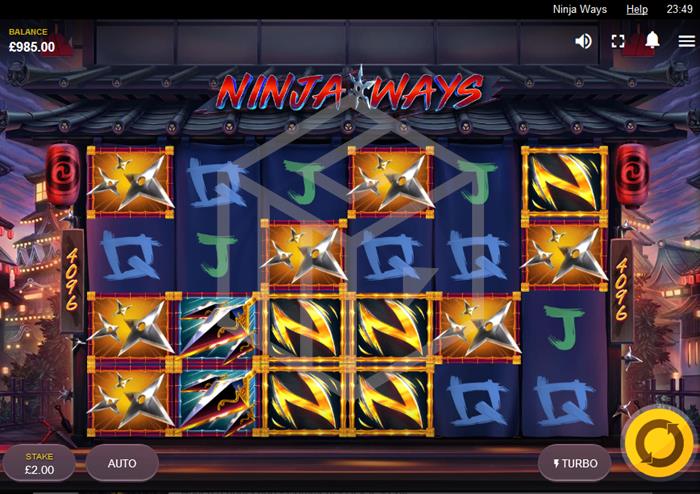 Ninja Ways design stays true to the theme. The game board appears as the shop front of a traditional Japanese style building with red hanging lanterns either side. Dangerous looking Ninja weapons lie casually on the floor in front of the building. The game is set at night time and in the distance, the streets are lined with multi-storey Japanese buildings. An atmospheric classic oriental soundtrack accompanies the play.

Low-value symbols are 10-A royal card values drawn in a Japanese style. High-value symbols are represented by nunchucks, Ninja throwing stars, a sai melle dagger, and the Ninja Ways logo. The logo is the highest value with 6 of a kind awarding 8x the bet size. A manga cartoon Ninja is the wild and finally, the scatter is a gold and black symbol with crossed swords at the bottom. 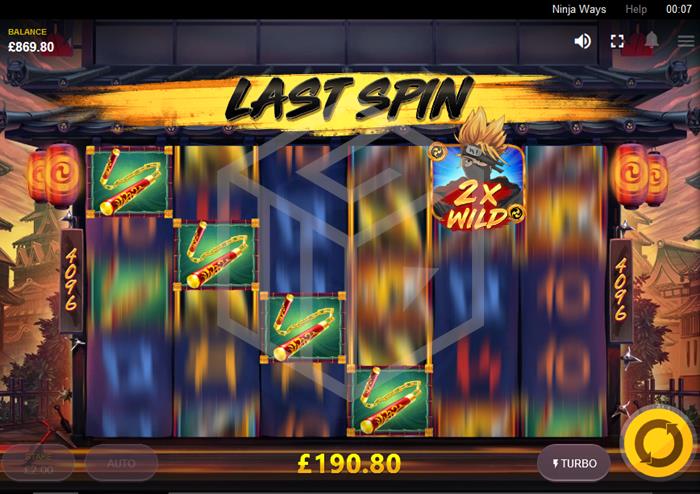 The base game has three randomly triggered base game modifiers. These modifiers also play a significant role in the bonus round which is a scatter activated free spin feature.

Those familiar with Red Tiger Gaming slots will be familiar with their tendency to add randomly activated base game modifiers, and Ninja Ways is no exception. During any spin, the reels can turn dark, the lanterns flash, and the Ninja can appear from the left and activate one of the following modifiers on the reels:

Free spins are triggered by landing 5 or more scatters on adjacent rows from the far left reel. Once triggered each landed scatter symbol will reveal a number of spins. The numbers are combined to give a total number of free spins for the bonus round. Any further scatter symbols landed during the bonus round will reveal a number of spins which will be added to the total. The reel modifiers play a big role during the free spins round and can appear individually or all together during any given free spin. 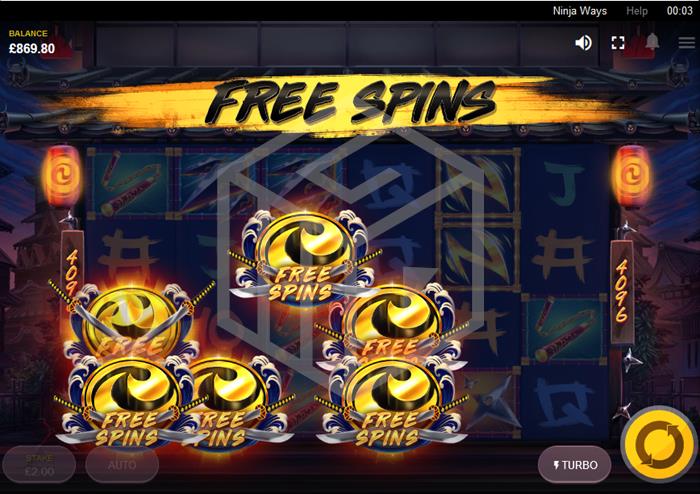 Our Thoughts on Ninja Ways

There’s a reason why Red Tiger Gaming slots tend to be among the most popular in the market; great design work, immersive games, and fantastic potential. With regards, this set of criteria Ninja Ways certainly ticks every box.

The Ninja modifiers occur often enough to keep the base game interesting during the wait to trigger the free spins – because let’s face it, that’s where the real potential lies. Free spins can really pay off when the modifiers combine, with wins of several hundred times the bet size very common at the end of a bonus round. The ability to acquire additional free spins throughout the bonus round also adds that extra bit of excitement to proceedings. Ninja Ways is an excellent slot which we thoroughly enjoyed, and we’re sure you will too.