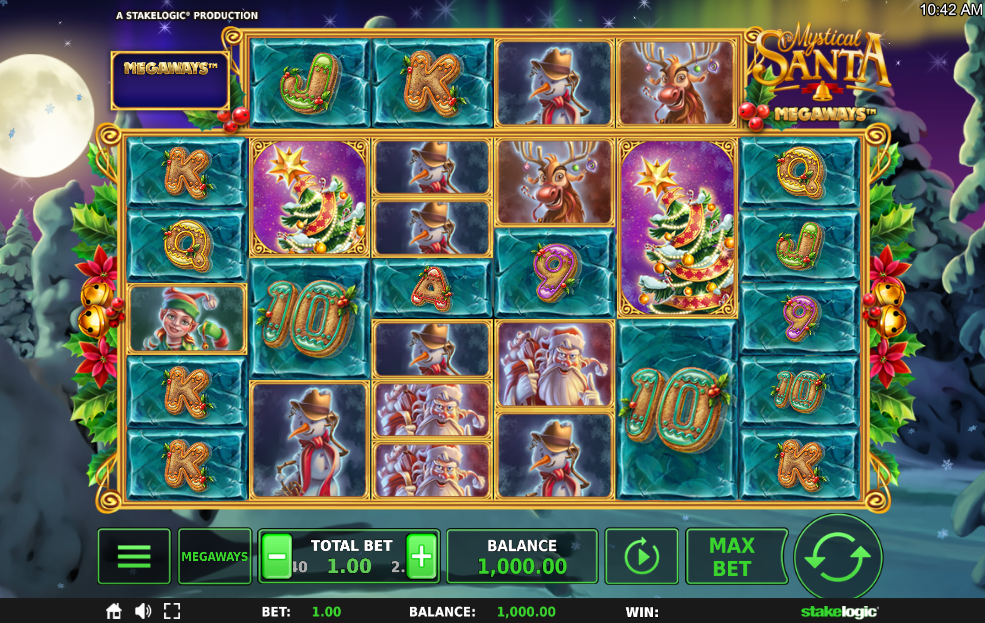 Mystery Santa’s visuals set a suitably atmospheric and animated snowy scene. The action takes place at night, high up in a wintry forest full of imposing evergreens covered in snow. In the top left of the screen, a large full moon illuminates the night sky as well as silhouetting Santa, his sleigh and reindeer as they blaze a trail across the top of the screen. The Northern Lights are visible at the top right of the screen. The reels have an ornate gold frame decorated on both sides with holly and Christmas bells. During the free spins round the scene shifts to inside a cosy log cabin adorned with Christmas decorations, stockings over the fireplace, and bundles of wrapped gifts and toys A typically festive soundtrack accompanies the play. Unusually there is also a Megaways button to the left of the regular control panel which clicks through to a comprehensive explanation of the unique Megaways mechanic. Having seen so many of them it’s easy to forget that any newbie chancing their arm at a Megaways slot for the first time may wonder what on earth is going on, so this is a nice touch from Stakelogic.

Low-value symbols are the standard royals 9-A. High-value symbols consist of a cartoonish Snowman, Elf, Reindeer, and Santa. Santa is the highest paying symbol, awarding 50x the bet size for 6 on adjacent reels. There are two wilds; a regular wild and a random multiplier wild which I’ll describe in more detail below. The scatter is a Christmas tree which appears on all reels.

When a win lands, the symbols making up the win disappear and new symbols cascade into their place. Reaction wins occur when the cascade results in a further win.  A non-winning cascade ends the reaction and that spin. Cascading symbols appear in both the base and bonus game.

During any spin, a cheeky Elf may appear to the left of the gameboard and fire one or more mystery gift boxes onto the reels.  These boxes each contain one of four reel modifiers and the feature is available in both the base game and during the free spins round; 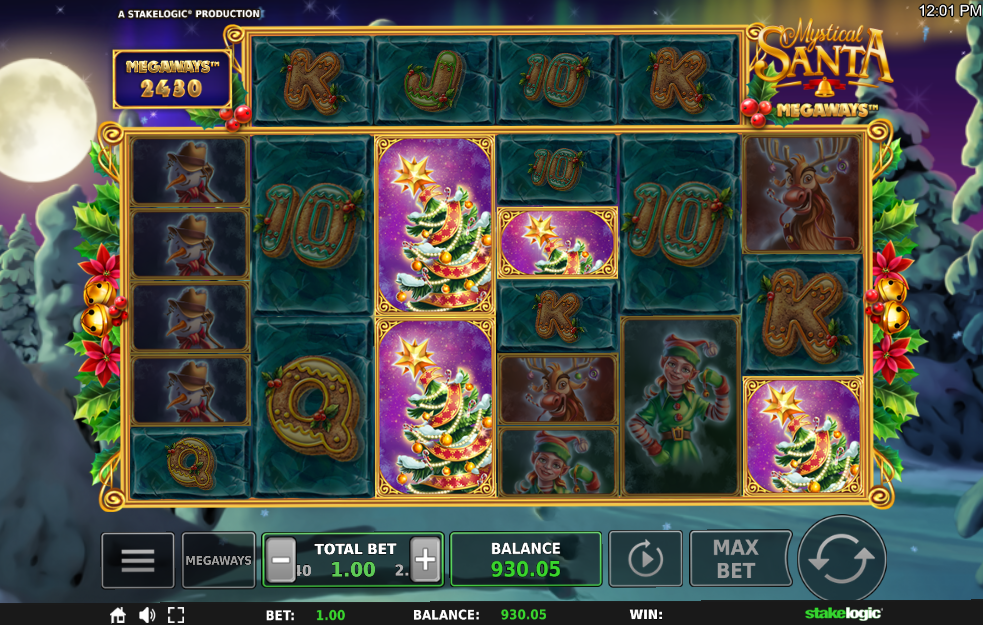 12 free spins are awarded for landing 4 scatters anywhere on the 6 reels. 5 additional spins are added for any scatters above and beyond 4 which land on the same spin. 5 or 10 extra free spins are added when 3 or 4 scatters land on a spin during the bonus round. Unlimited retriggers are available. Unlike a lot of Megaways™ games, increasing win multipliers are not added for each win. Instead, a random number of win multipliers between 0-5 will be added after each spin. The win multiplier value will never reduce during after a free spin, only increase or remain the same.

The gamble feature becomes available after a win or a chain reaction of wins. The gamble is offered on a double (or quadruple) or nothing basis; correctly guess the colour of card suit which is drawn from the deck of cards which appear to double your winnings OR correctly guess the suit of the next card off the deck to quadruple your winnings. If both cases a losing guess voids any winnings gambled.

Our Thoughts on Mystical Santa Megaways™

As far as I’m concerned this game offers everything a punter needs to keep them happy during a holiday spin session. The volatility is not so high as to scare off the all-important casual players, and not so low as to put off the action junkies, and with wins of almost 10,000x the bet size possible the potential is certainly there.

It's tough to come up with something totally original for a new Megaways™ slot these days, and nothing here reinvents the wheel as such. However, Stakelogic has tweaked the mechanics a little and offer some subtle but refreshing differences to other games. Basically, they have played around with what’s on offer in terms of reel modifiers and win multipliers to make their offering somewhat unique.

With a coherent Xmas narrative, some nice visuals and that heart-warming, “Night before Christmas” soundtrack, I really rate this Christmas Cracker from Stakelogic.

My other picks for top Xmas slots would be NetEnt’s Jingle Spin, Push Gaming’s Fat Santa, and NetEnt’s more recent release, the wonderful Santa vs Rudolf.