Mega Moolah: Isis by Microgaming released on 11.07.09 is a 5-reel & 3-row online slot with 25 paylines and a 88.12% RTP. This is a ancient Egypt-themed game offering players a max win of up to x their stake. Mega Moolah: Isis can be played on all devices from €0.25 to €62.5 per spin and is considered a high volatility game.

As with other games in the hugely popular Mega Moolah franchise, the special features are fairly straightforward but can be incredibly rewarding. They include free spins, a huge progressive jackpot, and a gamble feature.

Free spins are awarded when three or more scatter symbols hit the reels. Three scatters award a generous 20 free spins, with 25 for four scatters and 30 for five, and during the free spins any wins are paid out with a 6x multiplier. Add to this the fact that free spins can be re-triggered indefinitely throughout the free rounds and you can see how this bonus feature is capable of earning players a very decent profit.

Mega Moolah slots are not known as the “Millionaire Makers” for nothing; in fact, the progressive jackpot on Mega Moolah Isis has been known to reach record-breaking figures, most recently paying out one lucky punter an astonishing €18.9m! The jackpot feature is triggered randomly and the player gets to spin a Wheel of Fortune in order to secure one of the four jackpots (Mini, Minor, Major, and Mega). While the Mini progressive jackpot (starting win €10) may be the most common, it is the lure of the incredible Mega progressive jackpot (starting win €1,000,000) which keeps the players coming back for more. 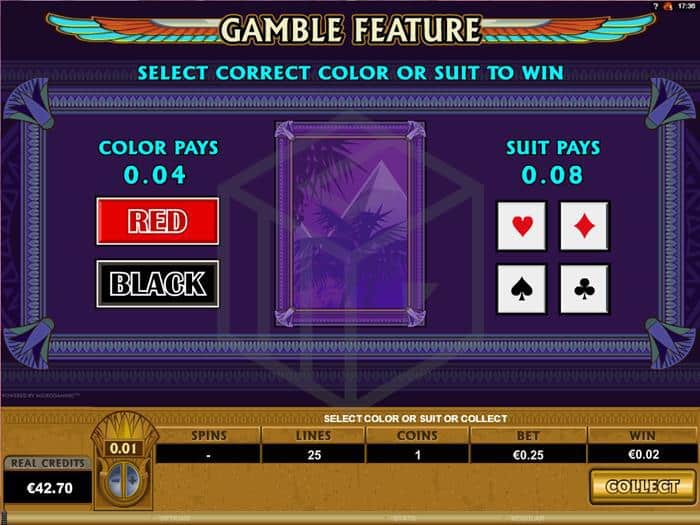 All non-progressive wins can be gambled on a card prediction game with the potential of doubling or even quadruple your money. Guessing the correct colour will 2x your winnings, but if you can pick the correct suit you can increase your win four-fold.

Our thoughts on Mega Moolah Isis

In all honesty, there is very little difference between Mega Moolah Isis and the original Mega Moolah game, but that’s not necessarily a bad thing considering the excitement the huge progressive jackpots bring not only to the game but also to the wider slots community. There are also a couple of nice differences. Firstly the free spins award a sizeable 6x multiplier, and secondly the ‘gamble’ option is a nice touch for the high volatility fans out there. In addition the wagers are much higher, giving our highrollers an alternative to the somewhat low bets on the original game. On the downside with only an 88.12% RTP the wins are a little thin on the ground, and reaching the jackpot stage and walking away with just €10 is a little annoying. However, most fans are willing to give up a little ROI in order to play for the life-changing money you rarely find on an online slot. 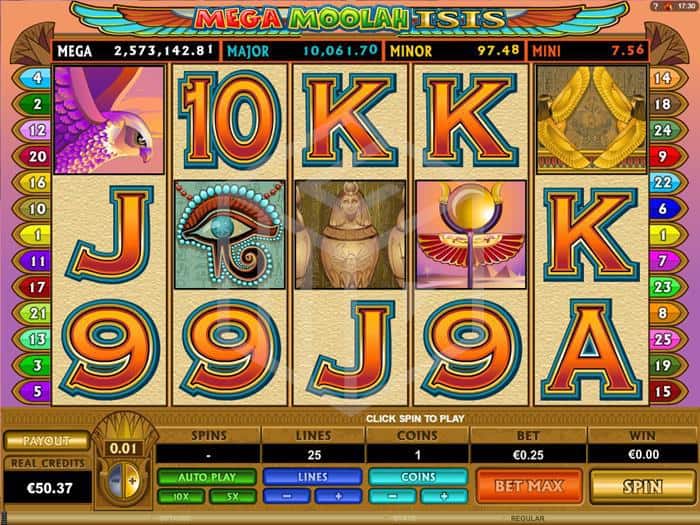 A-10 make-up the lower paying symbols. The scatter symbol is represented by a purple eagle and it pays whenever two or more show up anywhere on the reels. The wild, and also the game’s highest value symbol, is the game’s namesake, Isis - the Egyptian goddess of marriage, fertility, motherhood, magic and medicine and every win she forms part of enjoys a 2x multiplier.

The game’s Ancient Egyptian theme is represented not only by the authentic background music but also by the brightly animated higher value symbols. Find Flower, Sarcophagus, Goddesses, Crown, Eye of Horus, and of course the Isis Queen.

See all
Gambling Stuff
The reason behind this, is that there are no winning addicts....
14 minutes agoSee more >
4510X on rocket reels
What a result!!! Is there such a thing? Usually they say that beginners get luck...
1 hour agoSee more >
What are the odds for winnings 5000x + in slots?
On this subject I found an interesting article today https://www.americanfoot...
1 hour agoSee more >
Gigantoonz 1100x
Just tried out the new gigantoonz game and got a really nice first 'bonus' 😁✌️...
2 hours agoSee more >