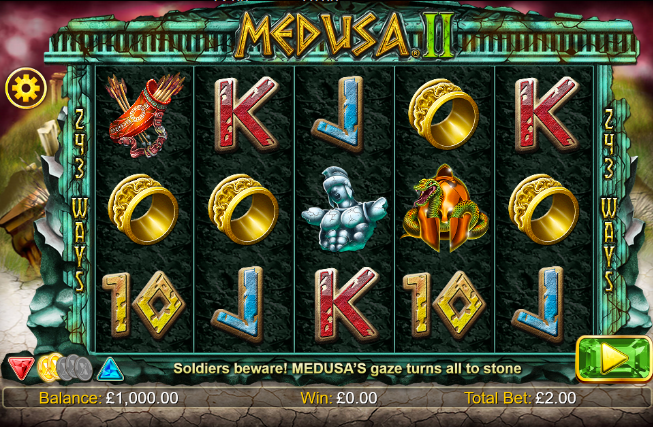 Although there is definitely an improvement in the artwork, the majority of the design is practically identical to the original. The game board is still framed by the front of a Greek temple, and there are still Greek ruins and buildings heading up the grassy hill beyond.

As well as a free spins bonus round Medusa 2 benefits from a locked reel feature in both the base and bonus game, and also a stacking wild feature.

Anyone familiar with the legend of Medusa will know that her stare can turn a man to stone, and that legend forms the basis of this base game feature.

During a spin a soldier may attempt to attack Medusa who will foil his attack by turning him to stone. The reel-sized soldier will then crack and explode, leaving a fully stacked wild reel in his place. During any spin in the base or bonus game Medusa may briefly appear covering between 2-5 reels before disappearing again. Whichever reels Medusa covered will display all the same symbols when the reels come to rest.

Land 3 or more scatters for 10 free spins with Medusa’s locked reels. On each free spin Medusa will inhabit between 2 and 5 reels which will then display all the same symbols. Three of more scatters landing during the free spins will re-trigger an additional 5 spins.

Our Thoughts on Medusa 2

Upon first sight it might appear that Medusa 2 is simply a slightly (but only slightly) better designed version of the original. Thankfully, however, the features are all new and therefore Medusa 2 can comfortable claim to be a game in its own right.

While I’d say the original is still the better game, there is enough here for a few hours happy punting. As a medium variance slot you’ll land some decent wins, and they’ll almost all come in the bonus round.

However, you’re unlikely to win anything too substantial, as such it’s not going to be one for the high rollers. In summary, not a bad sequel, but more a side-step than a move forward.

Tip: Have you given our Online Casinos Index a tour yet? If you fancy slots from NextGen Gaming, use the filtering option under "game providers", and we'll list all the NextGen Gaming Casinos we have.