The Jack Hammer influence is evident here insofar as the artwork has a distinctly comic book feel to it. However, rather than portraying life as a P.I. in downtown Chicago in the 1930s, Long Pao’s comic credentials use a manga aesthetic to set the scene. The action takes place in a huge room inside an imperial palace, complete with armed guards, intricate woodwork and vaulted ceilings. The gameboard sits front and centre with brightly coloured symbols depicting royal family members, card values, and samurai swords. A typical acoustic Chinese refrain accompanies the play.

Low-value symbols are the standard card values J-A as well as a samurai sword. High-value symbols are imperial princes and princesses with the Emperor commanding the most valuable position. His symbol pays 40x the stake for 5 on a payline. The wild is a Chinese symbol and the scatter is a golden dragon’s head.

Any win (or 3 scatter symbols) triggers the Sticky Wins™ feature whereby all winning symbols remain on the board while the remainder of the symbols respin. A new win created by the respin triggers another respin. Respins continue until no new wins are created. 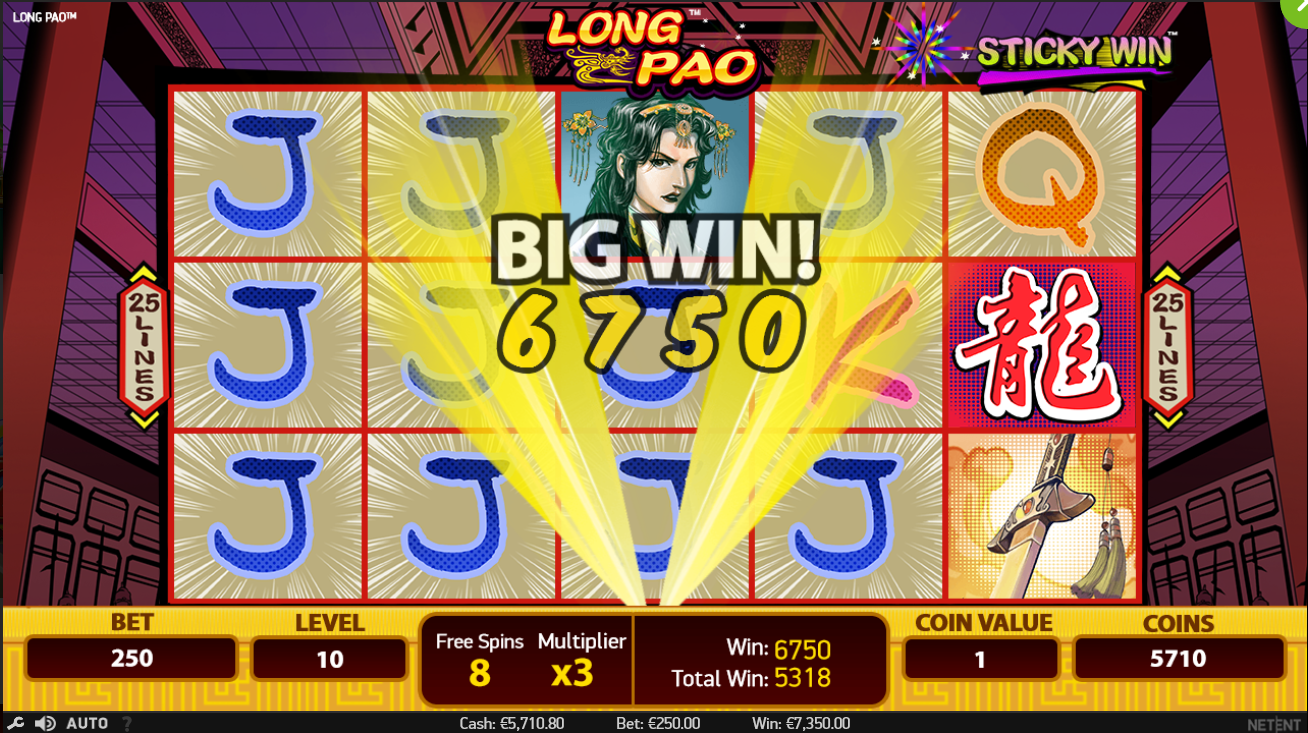 Our Thoughts on Long Pao

Long Pao is a very immediate game in that you see wins almost immediately, and some are not half bad. Sticky Wins come thick and fast. Furthermore, wins being tripled during free spins can make for a highly lucrative bonus round. Such immediacy is certainly a plus point when it comes to reeling the punters in and grabbing their attention. That being said, Long Pao is a little bit of a one-trick (ok two tricks) pony, and the appeal is not necessarily going to be that long-lived. It has to be said that playing Long Pao, the boredom kicks in relatively swiftly if the wins don't come.

Such a low volatility game is unlikely to attract the serious slot grinders, but with the masses preferring less variance in their slot choices Long Pao could be a winner in the Far East – after all, the original Jack Hammer not only did a brisk enough trade to spawn a sequel, but it is still going strong as part of the NetEnt portfolio.