The titular Beasts from iSoftBet’s recent ‘Legend of the Four Beasts’ slot refer to four creatures from ancient Chinese mythology. The beasts are recognised as the Gods of the four cardinal directions (North, South, East, and West). They are the Black Tortoise (also called "Black Warrior") of the North, the Vermilion Bird of the South, the Azure Dragon of the East, and the White Tiger of the West.

The Four Beasts take centre stage in iSoftBet’s latest Chinese mythology themed slot where they represent not the cardinal directions but the four high paying symbols.

Legend of the Four Beasts offers a medium volatility punt and benefits from wilds which literally multiply to cover more of the board, a free spins round with an increasing win multiplier, and also provides another outing for iSoftBet’s innovative ‘Ultra Bet’ feature

Occasionally a regular symbol will even transform into a Golden Wild after the spin has completed. Scatter symbols are still active on the reels during free spins and as such it is possible to retrigger more free spins. The wild multiplier does not reset in the event of a retrigger.

Duplicating Wilds which expand one symbol horizontally and vertically are also available on reels 3, 4, and 5 during the base game. However, they are silver rather than gold and as such do not add a win multiplier.

Available in most jurisdictions is iSoftBet’s ‘Ultra Bet’ feature. Essentially this is a ‘quick play’ feature whereby you pay 50x your chosen bet size and receive 50 turbo spins which play automatically.

Any free spins triggered during an Ultra Bet session are saved and played out once the 50 spins have completed.

Look and Feel of Legend of Four Beasts

iSoftBet know how to deliver a handsome slot, and Legend of Four Beasts is no exception. The scene behind the reel set is a visually stunning red landscape. Animated wisps of cloud hug treacherous looking mountains, while flat-topped Chinese pine trees overhang rocky outcrops. It isn’t an especially unique scene for a Chinese themed slot, but it is certainly one of the most accomplished designs. The board itself is, in comparison, pretty straightforward, consisting of a standard rectangular 5x3 reel set framed in gold piping.

The low value symbols are the card values 9-A, while the highs, as previously mentioned, are represented by the Four Legends. The Azure Dragon of the East is the highest paying of all, with 5 adjacent symbols awarding 10x the bet size. See below for the full paytable (the figures are based on a €12.50 spin) 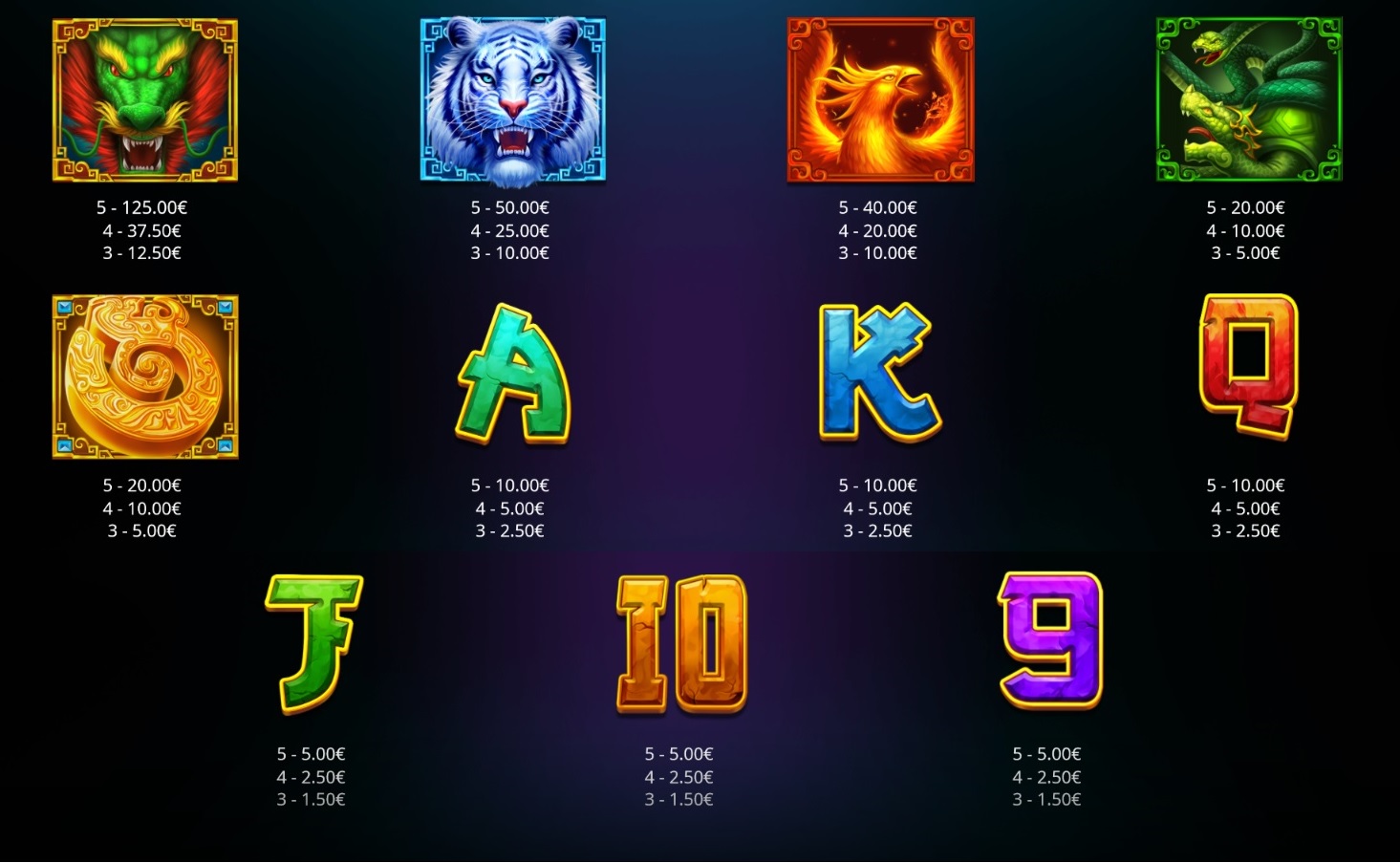 In terms of gameplay, I actually found Legends of the Four Beasts a lot more entertaining than I was expecting. Although it isn’t an especially feature packed or unique offering, it does provide moments of genuine satisfaction in both the base and bonus games. The wins provided by the duplicating wilds, both in the base and bonus games can be pleasingly generous, and you never have to wait too long to get one; the medium level volatility maths model sees to that. Also, although it is very possible to have a frustratingly poor free spins round, there are times when it can get properly exciting with added spins and a high win multiplier.

The Ultra Bet feature confuses me a little bit as I do wonder why anybody wouldn’t play it. Not only does it cut down on the irritatingly enforced 3 second minimum between spins, but it also comes with an increased RTP (up to 96.5% from 96%) and the star wins feature.

In summary, Legend of the Four Beasts is an attractive and competent slot from iSoftBet. What it lacks in originality and spice, it makes up for in good, old-fashioned gameplay.