Big Wins on Lady of Avalon 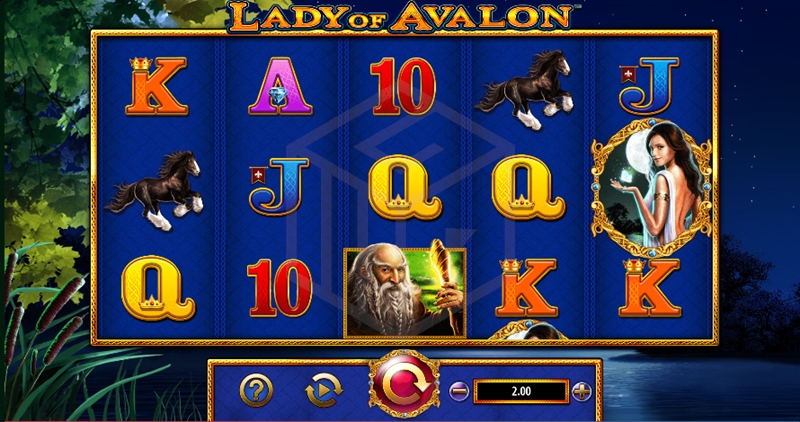 It’s the usual uninspiring story from Barcrest when it comes to the design work for Lady of Avalon. The backdrop is pleasant enough I suppose. A gameboard flanked by trees and riverbank foliage to the left, moonlit, starry skies above and an expanse of lake to the right. The leaves and plants gently sway in the breeze while the lake gently ripples. The gameboard is framed in gold with a blue background on which the symbols sit.

The low-value symbols are represented by the royal card values 10-A. The high-value symbols take the form of spell books, horses, castles, and a wizard (presumably Merlin). The latter holds the highest value, a not inconsiderable 500x the stake awarded for 5 on a pay line. The Lady herself acts as the wild and the scatter. 5 of the Lady on a pay line awards 200x the stake.

Before free spins start one of the regular symbols is selected at random to become a ‘special symbol’ for the duration of the round. When it appears on the reels this symbol will expand to cover the entire reel on which it sits.

Also, special symbols work like scatter symbols in that they do not need to be on adjacent reels to connect for a win. For example is a special symbol land on reels 1, 3, and 5 wins will be paid as though all three reels where next to one another.

Our Thoughts on Lady of Avalon

There’s not much to say here which hasn’t been said time and time again for Book clone slots – except that there are better ones out there.

This is pretty lazy stuff from Barcrest. Not only have they already released a Book clone this year, but it was also a medieval themed slot from Arthurian legend (Excalibur’s Choice). Both are inferior to Play ‘n Go’s June 2019 Arthurian themed Book clone ‘Rise of Merlin’ which at least looks fairly fresh and modern and offers a little twist during the free spins.

Lady of Avalon still has the potential of course, and if you’re a high variance fan with little concern for looks or subtlety then, by all means, give it a shot. I don’t think I’ll be coming back for more though.