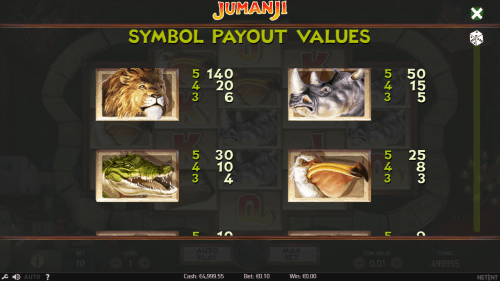 The slot and its elements are beautifully designed, and we have to admit the unique reel setup helps out with the overall impression of the video slot

This feature is available in both the base- and the bonus game. When activated, vines will entangle all symbols (including wilds) that form a winning combination. The game will give you a free re-spin, triggering all symbols that are not entangled by vines to spin again. The feature continues until the last spin does not generate any new winning combinations.

This feature is randomly activated in the base game. Once triggered, one - maybe two Jumanji-reels, will be slammed with a big fat crocodile that transforms into an expanding wild, covering the whole reel(s). Note that this does not apply for the 5th reel.

Those pesky monkeys! True to the movie, an absolute wrecking ball in the form of primates causing chaos, including your reels. Trigger this feature in the base game and watch the reels come to a stop. Any wins there and then is collected. Then, the monkeys will grab all of the symbols and shuffle them around to generate a guaranteed win according to the paylines and the corresponding pay table. 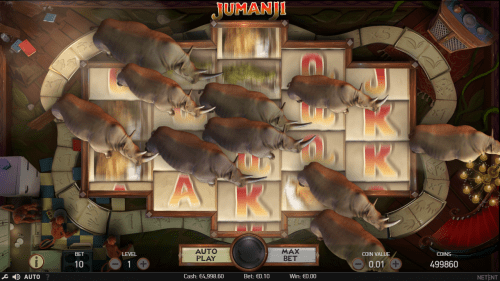 In the movie, Robin Williams gets chased around by a stampeding gang of pissed of Rhinoceros in his own house. Playing the Jumanji slot and having this feature activated could land you a huge win, stampeding across the board, adding 4-9 wild symbols.

The Jumanji Board Game

And finally, the cherry on top! Land yourself between 3 and 5 scatter symbols in the base game and prepare for the “Jungle Inside”. The number of dice rolls you receive for the board game bonus feature depends on how many scatters you landed. 3 symbols give you 6 rolls, 4 gives you 7, and finally, 5 scatters nets you 8 dice rolls. The board game is exactly what it sounds like. Choose your token, and start rolling the dice. The odds of rolling the dice are true! The bonus game comes with multiple features. The most prominent being those that are based on the special features found in the base game. Additionally, there is the Mystery Feature, Coin Wins and Extra Dice Rolls.

Rolling the dice and landing on the vine leaf symbols nets triggers the Vines Free Spins feature, giving you 10 Free Spins that works the same way as in the base game. You have a shot at several re-spins in the one and same spin. Should you be lucky enough to catch a Wild symbol or more, it’ll be tangled with Vines for the whole duration of the Free Spins feature.

Trigger this feature and say hi to 7 Free Spins. As in the base game, you’ll get to see crocodiles being slammed on your reels here too, covering the reel(s) in Wild symbols. Note that the same reel can’t be covered by Wilds for 2 spins in a row.

Time to go ape. Grab your 6 Free Spins and watch the monkeys shuffle your symbols around to give you a guaranteed win, exactly like in the base game.

If you land on the footprint symbols in the board game, you’ll trigger 5 Stampede Free Spins (the best feature), working exactly like they do in the base game; giving you between 4-9 wilds for each stampede across the board.

Move your token to a Mystery Feature pocket in the board game and win anything from extra Free Spins, x2-x10 coin wins or extra Dice Rolls. If you win a Free Spin feature, it can’t be the same type you’ve previously won (if any) in the same bonus feature game.

Our thoughts on the Jumanji slot 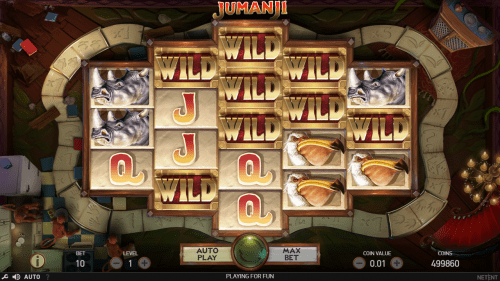 Being an 80’s kid, I’m a huge fan of Robin Williams (rest in peace). I remember renting the Jumanji VHS from my local shop, popping it in the VCR. After that, heck - the whole neighbourhood watched it with me, over and over, and over - and then some more! It was an instant classic I grew up, forgot about it - and here I am today, testing and reviewing the slot version of the same movie that made me freak out in awe. Not to mention desperate to get my hands on the Jumanji board game so, so bad (even more than playing that wicked Ouija board game). Remember that kid telling Robin Williams “You’re afraid. It’s okay to be afraid” where the former replies “I am NOT afraid of anything”, and the kid goes “Prove it”. HAHA! Long story short, the board game is set, tokens are in place, dice is rolled and… The Jungle just comes crashing down in their house, like a college party gone absolutely bonkers! NetEnt’s Jumanji