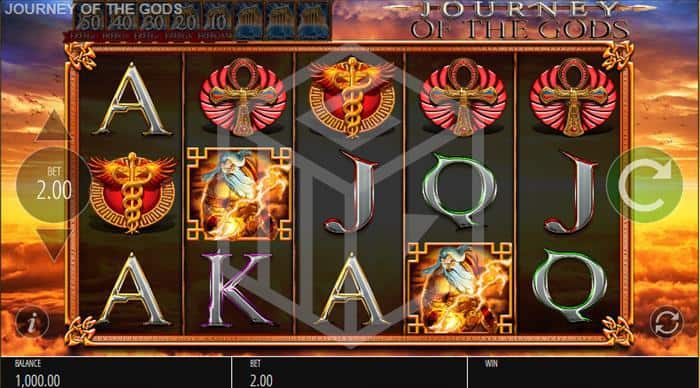 Set high in the heavens the background is a static image of swirling clouds in the golden sky, the kind of sky where the Gods might do battle. The design is eye-catching but ultimately fairly straightforward – a little like the game itself. The game board takes up most of the screen with familiar symbols adorning the translucent reels as they spin to an ominous backing track which suggests an epic battle awaits.

The low-value symbols are the standard J, Q, K, and A Royals followed by the Egyptian Ankh cross, the Staff of Hermes (familiar from myriad other ‘Ancient’ themed slots of yore) then onto the three Greek Gods; Hermes, Aphrodite, and Zeus. The most valuable symbols are the Journey of the Gods logo and the Sun wild, both of which pay a whopping 500x the bet size for 5 across a pay line.

All the action stems from the cascading mechanic which comes into play after a win is landed which lead not only to respins but eventually also to free spins.

Any slot fan will be aware of the cascading reel mechanic as it is employed in some of the most popular games around, but for any newbies, the mechanic comes into play when a win has been landed. Rather than the spin ending on the win, all the winning symbols are removed once the win has been accounted for and fresh symbols ‘cascade’ from above to fill the empty spaces – akin to a free respin. If a new win emerges after the cascade is complete, then once again the win is added to your total winnings and the cascade will repeat once again.

Journey of the Gods Free Spins 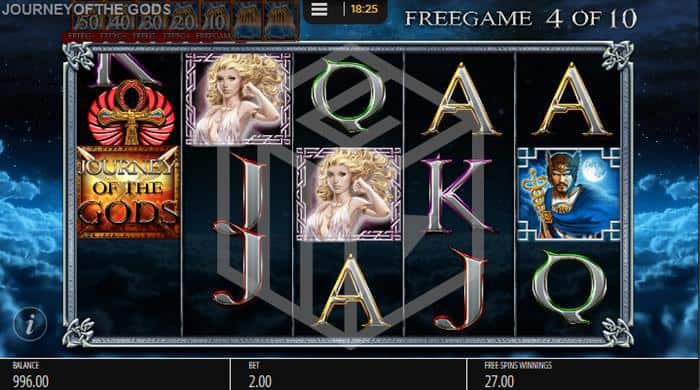 As you may have noticed by now, there has been no mention of a scatter symbol thus far, and that’s because the free spin round in Journey of the Gods is triggered by completing a chain of four consecutive cascading wins. This will award 10 free spins. Although there are no other special features within the free spins (ie: low-value symbols changing to high value, multipliers, additional wilds etc) the 4 cascading wins trigger can retrigger up to 4 times, meaning that it is very possible to end up with 50 free spins. Furthermore, considering each win will automatically award a cascade respin it is more likely to be the sheer number of spins which will pay dividends here rather than continued spectacular wins.

Our Thoughts on Journey of the Gods

Although certainly not as complex as a 117k ways to win Megaways slot and lacking the dozen or so features of a Ted or a Mar Attacks! The journey of the Gods is a great little game from Blueprint, nonetheless. It should appeal to med/high variance grinders as it has playability combined with some serious potential given the win sizes and a potential maximum single game payout of 10,000x the bet size. The design and symbols are neat enough, although certainly not anything we haven’t seen plenty of times before, and the features will be plenty familiar to any half-serious slot fiend. However, Blueprint has combined all of these elements superbly to produce a highly enjoyable, honest-to-goodness straightforward slot with serious potential.