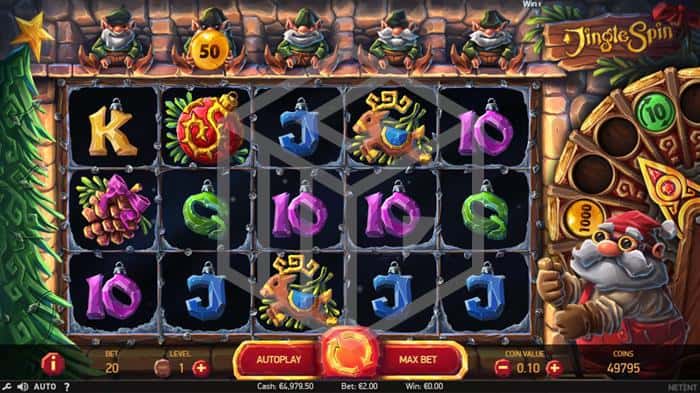 Jingle Spins benefits from superb, seasonal graphics. High definition cartoon like visuals takes you inside Santa’s workshop with the game board set inside a window looking out to the dark, snowy night sky. A large Christmas tree sits to the left of the board/window, while Santa himself sits to the right of the board, lever in hand, ready to spin a kind of wheel of fortune just behind him (more of this later). Sitting on the top of the stone window frame there are five elves, one above each reel, ready to bestow goodies to the reels below (again, more of this later). The low value-symbols are taken by the standard 10, J, Q, K, and A, while the five high-value symbols are represented by a selection of Christmas decorations, namely a pine cone, a reindeer, decorated coins, an orange slice with cinnamon, and a red and gold bauble. The red and gold bauble is the most valuable of the regular symbols with 5 in a row earning 50x the stake. The other board symbol is the wild which is a gold gift box with a red ribbon bow.

The base game has every present mini-feature utilising the spinning wheel and the elves which is in play on every spin and which has the potential to deliver frequent cash wins and is also the only way to access the free spins.

The Spinning Wheel Every time you spin the reels Santa pulls on his level and spins the wheel behind him. Each segment of the wheel has a circular recess at the top which is either empty or filled with a coloured bauble. If Santa’s wheel stops at a filled segment then that bauble is passed up to the elf on top of the far right reel. If there is a wild gift box anywhere in the reel below the elf will drop the bauble into the gift box and whatever it contains the player receives. If there is no wild gift box beneath that reel then the bauble is passed on to the next elf and the whole process begins again. The potential bauble wins are: 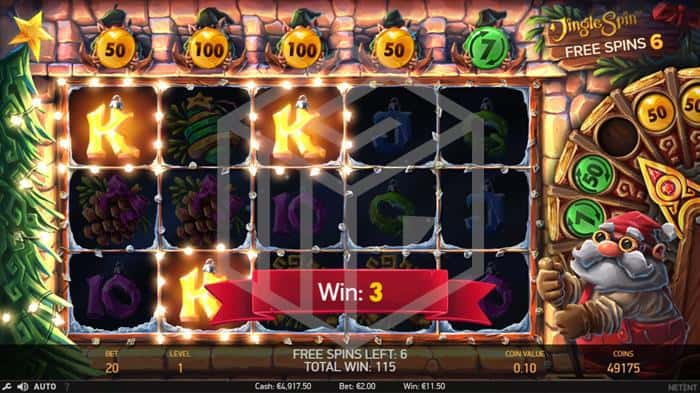 When you land some free spins you are guaranteed that each wheel spin will produce a bauble, meaning that there will constantly be multiple baubles being fed along the line by the elves. This doesn’t mean they will always win, but your chances are increased substantially. Furthermore, the chances of a green free spin bauble landing also increases and it is not uncommon to land multiple retriggers while playing free spins.

Our Thoughts of Jingle Spin

The first thing to note is that it didn’t escape our attention that for all intents and purposes this isn’t a new slot at all, rather it is a repackaging of NetEnt’s 2013 release, Egg-O-Matic. In terms of gameplay, features, and ROI it is identical but for the way in which the mechanics are presented visually. That said, we’re not really sure this matters as Egg-O-Matic is now 5 years old and giving it a festive revamp isn’t the worst thing in the world, especially if you consider the target audience. What we mean by that is that this is a low variance slot with not much chance of offering huge wins. It’s therefore much more likely to be played by newbies or recreational players rather than true gamblers, action junkies, or slot aficionados, and to most of these, Jingle Spin will be a brand new game, and hence NetEnt is undoubtedly trying to tap into a new market for an old yet popular game. The game itself is rather enjoyable. There may not be a truckload of features, but the ever-present spinning wheel combined with the base game means there is always something to keep the player engaged, and there are more than enough wins to maintain your interest as you wait for some free spins to roll in.