Inferno Star by Play'n GO released on 2018 is a 5-reel & 3-row online slot with 5 paylines and a 96.38% RTP. This is a classic fruit-themed game offering players a max win of up to 2500x their stake. Inferno Star can be played on all devices from €0.05 to €100 per spin and is considered a high volatility game.

As you might have guessed from the name, the sun is what's in focus here. The reel set itself is pretty plain and have been set in front of a giant Sun seen blazing in the background. There are some simple sound effects that are triggered when you spin and stop the reels. Even though the sun is in the spotlight here, what you will see most of on the reels are different fruits, which is where the classic parts of the slot come in.

The various symbols on the reels include both lemons, plums, grapes, cherries, apples and watermelons. The sun is the highest paying symbol, however, giving you 25x, 75x or 500x your stake for 3, 4 or 5 of the same symbol on one active payline. There are no wilds or scatter symbols in this slot. Instead, there is a different special symbol, being the Ragin Sun symbol that can activate the games Raging Sun Re-Spins feature.

It quickly becomes clear that Play'n Go have decided to really keep things simple. But they have created a fun way for you to enjoy even bigger rewards than what can be expected from the sun symbol. The games Raging Sun Re-Spins feature is the one and only bonus round in this slot which can pay up to x2500 your total stake. 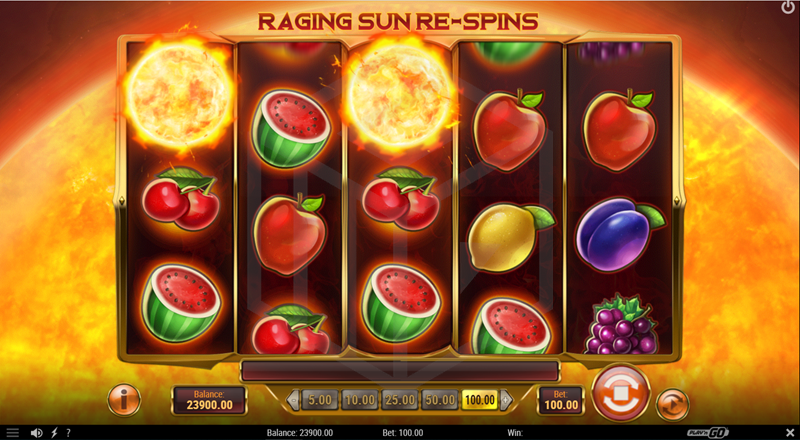 This feature will be triggered if the Raging Sun symbol appears on the middle reel. Should this happen, then the middle reel will be held in place while the remaining four reels will start spinning once again. Should another Raging Sun symbol appear anywhere else than on the reel that is held, then that reel will also be held and the others will spin again, which will go on and on.

This re-spins feature will, in fact, continue as long as new Raging Sun symbols keep on appearing. Should you manage to land three, four or five of them then you can expect some great winnings. A payout from this feature can result in 125x, 375x and even 2500x your total stake. In addition to these payouts, you will also be able to get winnings from any other normal symbol combinations that are created during the re-spin feature.

Our Thoughts on Inferno Star

If you are looking for a straight forward slot that is highly volatile, then this might be the slot for you. However, keep in mind that this is, in fact, a fairly simple slot without any big, complicated features or bonus rounds. What you see is basically what you get. The highlight of Inferno Star is, of course, the Raging Sun feature where you are able to get winnings of up to x2500 your total bet for five symbols.