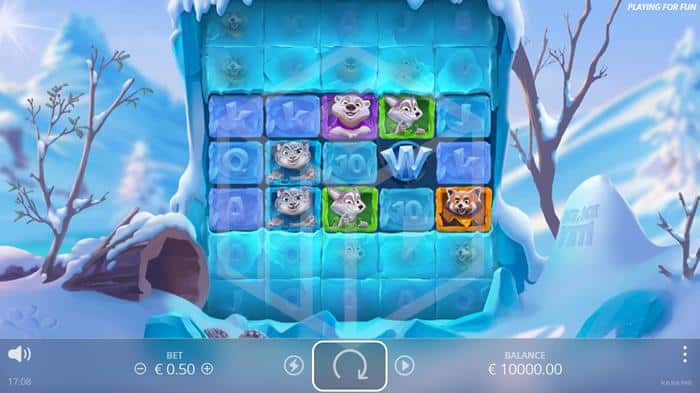 The design work in Ice Ice Yeti is really nice. The cartoon snowscape either side of the game board is fresh and bright with snowy hills and mountains in the distance looking hazy under the winter sun, while fresh snowdrifts at the foot of the game board cover shrubs and adorn tree branches in the foreground. Spins of the reels are accompanied with a jaunty, playful, mischievous soundtrack which suits the nature of the slot well. The game board itself actually appears as a giant ice block carved into smaller individual blocks of ice.  The 15 symbols you can initially see on the 5x3 board have had the ice broken away from them so you can see the symbols. The rest of the blocks above and below the game board, however, have yet to have the ice broken although you can make out game symbols behind the ice exterior. Throughout the game some or all of these blocks will have their ice cleared at some point, therefore adding more symbols, rows, and ways to win in the process. The 5 lower value symbols are the standard 10-A all carved into blocks of ice, while the 4 higher paying symbols are the aforementioned ‘rasals’, the lynx, hare, polar bear, and fox. The fox pays the most with 5 of a kind paying 2.5x the bet size. The wild is a big ‘W’ which spins to reveal the angry awoken Yeti when it lands, which in turn triggers the respin feature.

As well as the previously mentioned respin feature, Ice Ice Yeti also benefits from Yeti Shake. As there are no scatters there is no other bonus round. Yeti Shake 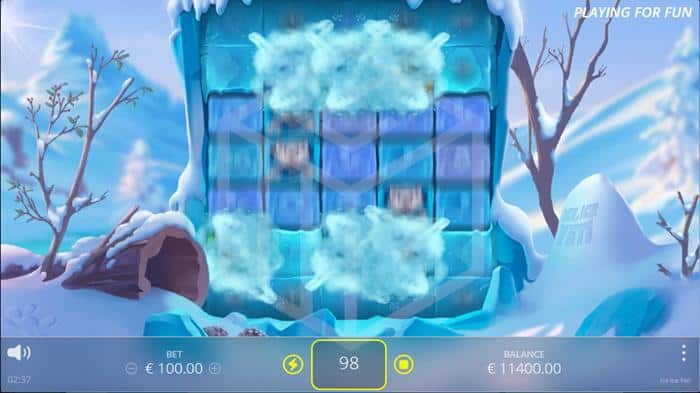 The Yeti Shake is randomly triggered in the main game, and when it occurs, between 2 and 10 covered positions will break and become active positions for the next spin. Ice Ice Respins Whenever the Yeti lands in an active position Ice Ice Respins will be triggered. Just as in the Yeti Shake, landing the Yeti wild will cause ice blocks to break and become active positions (although only 2-3 blocks will break initially). The reels will then respin with the Yeti wild remaining in place (it will become sticky in other words). Also, if a win landed or was made courtesy of the Yeti wild then that win will also remain in place for the respin. If the initial win is added to either by another identical symbol OR if another completely different win lands on the respin then ALL of the winning symbols and the Yeti wild will remain in place for another respin. Any other Yeti wilds which land during Ice Ice Respins will cause yet more ice blocks to break and hence open up yet more ways to win. The respins end when either all active positions have become sticky or if no new winning combinations land on a respin. Hit the Ice Ice Respins right and you could walk away with a huge win. 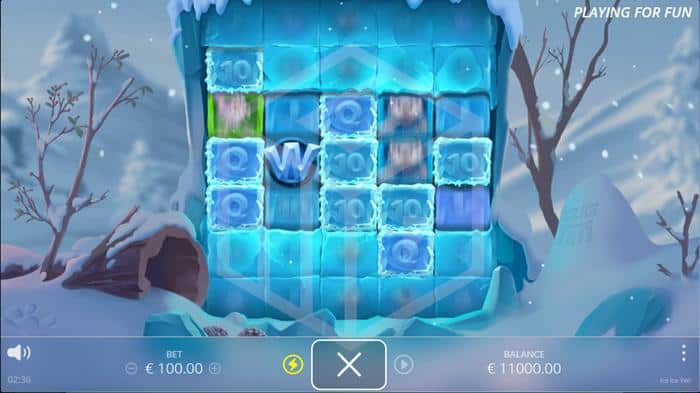 Our Thoughts on Ice Ice Yeti

I do love a fun, festive slot, and Ice Ice Yeti ticks that box superbly. There is no bonus round to speak of and no free spin round as such, although the respins with sticky symbols takes the place of those quite nicely I found. For what is described by NoLimit City as a ‘highly volatile’ slot I found that the Ice Ice respins weren’t especially tough to trigger and the features, such as they are, kept me happily entertained throughout my tenure at the reels, delivering some n(ice) wins along the way. Also, with a possible maximum win of nearly 9,000x the bet size this slot has awesome potential to deliver some serious wins just in time for Christmas!