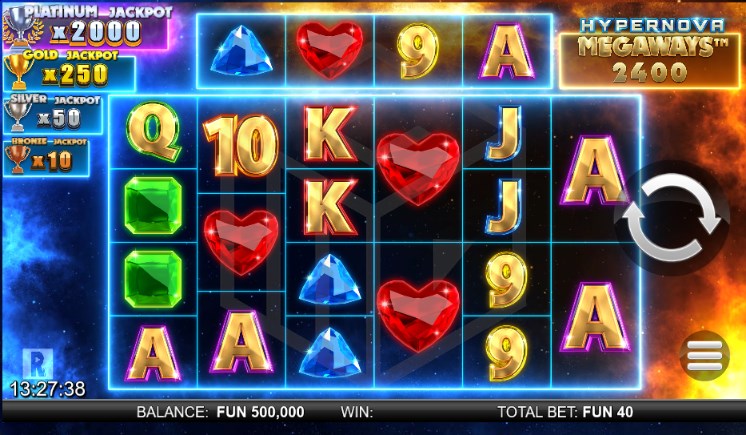 This slot has a fairly simple but nonetheless eye-catching design. The background, which is visible across the screen due to the transparent gameboard, is of deep, dark, outer space. Stars decorate the central black canvas with the occasional shooting star speeding off into the distance. To the left of the gameboard is a slowly swirling blue cloud of space dust while to the right an orange glow – presumably the afterglow of a hypernova (for those unaware, a hypernova is a hugely powerful stellar explosion 10x or more powerful than a supernova), covers much of the right side of the screen. The gameboard has a familiar Megaways™ set-up with 6 standard vertical reels and one horizontal reel positioned above reels 2-5. Between 2 and 7 symbols land on each reel every spin resulting in a maximum of 117,649 ways to win (7x7x7x7x7x7x7). As previously noted the board is transparent and is framed by a thin, neon blue border. The soundtrack which accompanies play is a vast, sprawling, epic piece of other-worldly, ethereal music – a perfect fit for this slot.

Low-value symbols are the standard card values 9-A. High-value symbols are blue, green, red, and diamond gems. The diamond is the most valuable regular symbol with 6 symbols on adjacent reels worth 100x the bet size. This is way higher than the second most valuable red gem which pays a mere 5x the bet size for 6 of a kind. The game also has wild symbols which only appear on the horizontal row, as well as a scatter which takes the form of a star in Hypernova. Four Jackpot trophy symbols also appear with some scatter symbols; bronze, silver, gold, and platinum.

When a win lands, the symbols making up the winning combo disappear and new symbols cascade into their place. A new win created by the cascade repeats the cycle which continues to repeat until no new win is created. 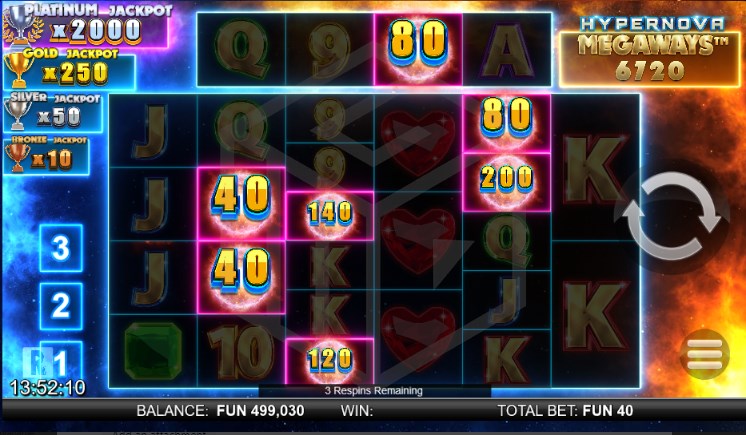 Landing 6 or more scatter symbols trigger the game’s main feature, Jackpot Respins. Most scatters have a cash prize attached to them of between 1x and 100x the bet size. The remaining scatters contain one of the four jackpot symbols – their values are as follows:

Bronze and Silver Jackpots can be won more than once during Jackpot Respins, whereas Gold and Platinum can only be won one time each.

The bonus round starts with 3 respins. Any existing scatters remain sticky whilst the remaining symbols spin. The respin counter is reset to 3 after any respin which results in at least one new scatter symbol landing. Jackpot respins end when either the board is filled with scatters, or the respins reach zero and no new scatter is forthcoming. At the end of the bonus round the cash prizes attached to each scatter are combined to give the total win.

Hypernova Megaways certainly has potential with its maximum win set at a not inconsiderable 8,640x the bet size. However, while it may offer a big potential top prize, it offers relatively little in terms of entertainment value, other than the blissful soundtrack.

The real problem is the lack of truly exciting features.

Yes it has cascading reels and reaction wins, but there is no mystery symbol, the wilds are limited, and there are no increasing win multipliers. This means base game wins tend to be pretty low. Furthermore, although we’re always keen to see innovations in Megaways™ games, unfortunately Jackpot Respins are just no match for the free spins with increasing win multipliers you get playing the likes of Bonanza, Diamond Mine et al. Also, Jackpot Respins are hardly an innovation – they are practically identical to the Lightning Respins bonus rounds from Lightning Box’s Lightning Leopard and Lightning Horseman slots.

Personally, I feel ReelPlay ought to have played it safe with their first Megaways™ slot and gone for something high variance and exciting. Instead, they’ve tried something different and along the lost half of the magic, these kinds of slots can provide. It’s not bad, but it’s really not terribly good either.