The design is typical Hugo fayre, a fun cartoon romp. The main screen shows a placid lake with a range of mountains in the near distance with fluffy clouds and the occasional seagull flying overhead. The gameboard is a wood-framed affair with translucent reels and wooden control panel beneath. Presumably (given the narrative of the game) the gameboard is designed to resemble either the windscreen and controls of Hugo’s bi-plane or perhaps those of the Golden Submarine from the game’s underwater adventure. The game has three main scenes, the aforementioned above-ground scene, an underwater scene which is somewhat reminiscent of a scene from SpongeBob Squarepants with giant pink clams and cartoonish underwater foliage. The third and final scene takes place in Don Croco’s lair, Skull Castle, which is filled with loot and where the final battle takes place.

Low-value symbols are the standard 10-A playing card values. High-value symbols are Grease Monkey, Eagle Pilot, Stewardess Hugolina, and Flying Ace Hugo. Hugo is the wild, and also the most valuable, with 5 on a payline worth 50x the bet size. There are two scatters, a golden submarine, and Hugo’s orange bi-plane. 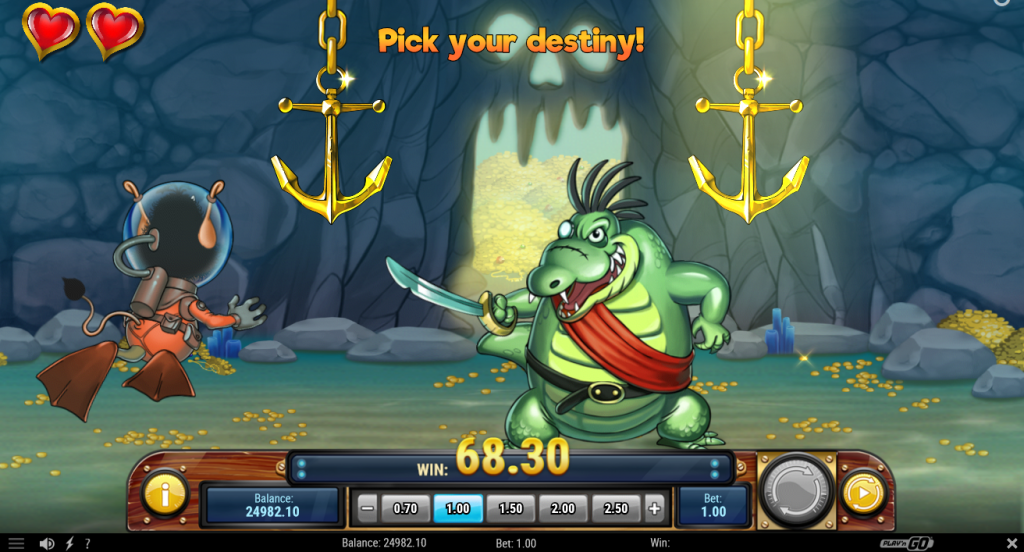 There might be only two special features, but each comes with plenty of add-ons.

Underwater Adventure is triggered in the base game by landing 2 Golden Submarines. It is also triggered during the free spins round after 20 free spins have been successfully completed with lives still intact.

Once triggered, Hugo is submerged in full deep sea diver’s regalia to the sea bed to play a pick bonus game. Prior to the bonus game, the Golden Submarine appears and a reel set in its belly spins to award one, two, or three hearts which represent one, two, or three lives in the game. First up Hugo picks one of three giant, pink clams which reveals either a cash sum or nothing. If the clam is empty, Hugo loses a life, although you’ll still be awarded a cash sum. Make it to the next round to pick from 3 treasure chests, after which you’ll pick from 3 red chests. Make it through all three rounds and you’ll receive one spin on the Golden Submarine reels which this time contain win multipliers. Depending on how many lives you have intact (you get one spin for each life) you could multiply your feature win by up to 20x.

3 bi-plane scatters trigger Hugo’s Air Ace Free Spins. For this round, the gameboard shrinks slightly to allow Hugo in his plane to become visible underneath it. You start with one heart (life) in the heart-meter above the gameboard. You aren’t given any set number of spins but continue until you lose your life/lives.

A life is lost if, during a spin, Hugo flies into one of Don Croco’s flying mines. There are, however, a couple of beneficial plying objects Hugo often flies into; Heart-shaped balloons add an extra life (Hugo can have a maximum of two additional lives at any one time), and star-shaped balloons contain 2x win multipliers. Fly into a balloon and up to four 2x multipliers are added to the board (up to a 16x win). Furthermore, during free spins, the Hugo wild symbol appears at any time on the board, and in any number, operating as a ’flying wild’. A flying wild operates the same as a walking wild insofar as rather than disappearing after a spin it ‘flies’ one space to the left each spin until it reaches the far left of the gameboard.

Our Thoughts on Hugo’s Adventure

Out of all the Hugo games, this is by far the best. Anyone who enjoys a slot which kind of doubles as a video game should love Hugo’s Adventure. There is a solid if cartoonic, narrative and plenty of interaction with Hugo himself. The Free Spins game also has a neat conclusion as Hugo escapes Skull Castle with a tasty bag of swag. This game also offers more potential than its predecessors and is also more volatile, which may attract variance lovers.

Perhaps it is because I fared rather well during my hour at the helm, but I rather enjoyed Hugo’s Adventure. Had I been on the wrong side of variance I probably wouldn’t be quite so effusive.  Nonetheless, it would still be a solid game.

In conclusion, although Hugo’s Adventure won’t be to everybody’s taste, it is a fun romp with some colourful characters, with a chance to win big built-in.